Thursday was a mixed day for the stock market, with major benchmarks spending much of the day in positive territory but giving up their gains to fall slightly by the close. Encouraging news of a compromise on the tax reform front bolstered sentiment early, but ongoing doubts about whether the bill will get the needed support in both houses of Congress weighed on investors' minds. Nevertheless, some positive announcements from individual companies showed up in their share prices, and Nordson (NASDAQ:NDSN), Teva Pharmaceutical Industries (NYSE:TEVA), and Snyder's-Lance (NASDAQ:LNCE) were among the best performers on the day. Below, we'll look more closely at these stocks to tell you why they did so well.

Nordson has a good quarter

Shares of Nordson rose by 13% after the maker of adhesive-dispensing systems posted its fiscal fourth-quarter financial results late Wednesday. The company said that sales were up 13%, with more modest net income growth of roughly 5% that was better than what most of those following the stock were looking to see. Strength in advanced technology applications led the way higher for Nordson, and fast growth in the U.S. and Japan helped offset sluggishness in the rest of the Asia-Pacific region. Higher backlogs led Nordson to increase its sales guidance for the current quarter dramatically, and that has shareholders excited about the tech exposure that the company has built up. 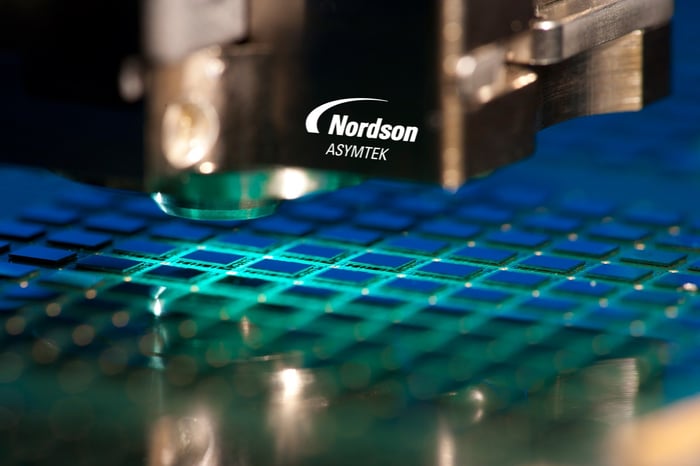 Teva Pharmaceutical Industries stock climbed 10% in the wake of the company's announcement that it would shrink its labor force dramatically. The maker of generic and proprietary drugs said that it would eliminate 14,000 jobs, or roughly a quarter of its workforce, and suspend the stock's dividend. Job eliminations will include management positions, and those managers who stay on board will receive no bonuses for the year. Teva believes it can save $1.5 billion next year and $3 billion by the end of 2019 with these actions, which were considerably more drastic than previous speculation last week for cuts of 5,000 to 10,000 jobs. Even so, Teva will face an uphill battle to return to full financial strength.

Finally, shares of Snyder's-Lance jumped 13%. The stock gained ground late in the trading session after reports surfaced that Campbell Soup (NYSE:CPB) had approached the snack food company with a potential acquisition bid. In response, Snyder's-Lance is apparently looking at a possible sale, having hired an investment bank to assist it with analysis. The snack business behind brand names like Cape Cod and Kettle chips saw tough times earlier in the year, but shareholders hope that this latest news could finally be the catalyst that keeps the stock moving further into record territory.