Please ensure Javascript is enabled for purposes of website accessibility
Log In Help Join The Motley Fool
Free Article Join Over 1 Million Premium Members And Get More In-Depth Stock Guidance and Research
By Rich Smith - Dec 16, 2017 at 9:33AM

In a happy coincidence, both America and Canada are shopping for frigates at the very same time. An opportunity to save money is knocking.

Canada is shopping for new frigates. The U.S. Navy just announced a frigate tender of its own. Could both of these deals be made better together?

Just up north of our border, Canada's navy is rusting. In March, the Royal Canadian Navy decommissioned its last operational guided missile destroyer (HMCS Athabaskan), leaving it with a fleet of just 12 frigate-class warships to defend its arctic territories. Worse, the youngest of these warships are more than 20 years old.

Canada's defense ministry announced in 2014 a tender offer to build a fleet of up to 15 shiny new frigates, and a potential $47.3 billion cash prize for the contract's winner. As it so happens, at the same time, the U.S. Navy is also looking to commission a new fleet of frigates -- as many as 20 ships -- but we'll be spending only $950 million apiece.

Right off the bat, you can see that Canada's frigates are expected to cost as much as thrice the U.S. cost, and this suggests an obvious solution. The U.S. Navy benefits from a massive scale of production to build and maintain its large Navy. Perhaps Canada could hitch a ride on the U.S. defense industrial base, and reap some of those savings for itself? 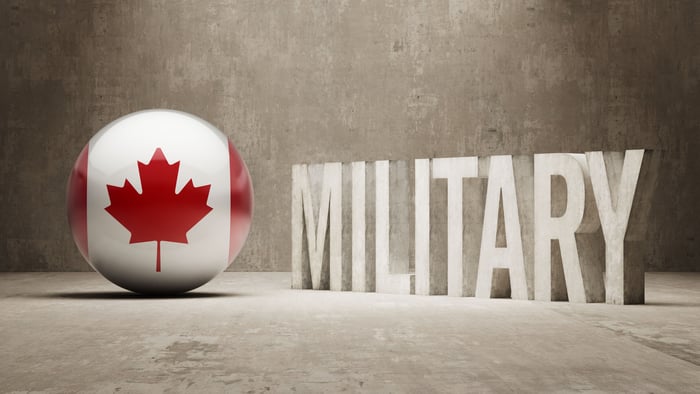 Psst! Don't tell anybody, but Canada has a military, too. And it's about to get bigger. Image source: Getty Images.

Canada is calling its yet-to-be-identified new frigate the Canadian Surface Combatant (CSC). It has chosen local shipbuilder Irving Shipbuilding to serve as prime contractor on the project and given Irving a budget of up to $CAD 60 billion (about $47.3 billion, U.S.) to build 15 warships at its shipyard in Halifax -- as much as $3.15 billion per ship. Irving will assist the Canadian government in picking a subcontractor to bid on a unified hull-and-combat systems design for Irving to work on.

Right now, three teams are known to have submitted bids to work with Irving:

Speaking of Lockheed, Lockheed is joining with BAE (and fellow team members CAE, L-3 Technologies Ultra Electronics, and Maxar Technologies) to bid the Type 26 for Canada.

What the U.S. Navy wants

Dissatisfied with the firepower and combat survivability of its new Littoral Combat Ships, the U.S. Navy, too, is in the hunt for a new warship to fill out its fleet. We covered the U.S. Navy's plans last month.

Issuing an official Request for Proposals (RfP), the Pentagon described its desire to acquire new frigate-class warships (i.e. small surface combatants smaller than a destroyer, but larger than a Littoral Combat Ship). Like Canada, the U.S. is looking for contractors to propose a ship based on "parent design" vessels already in "production and demonstrated (full scale) at sea."

As regards the specific designs to be considered, vessels based on Huntington Ingalls' (HII 1.44%) National Security Cutter, or on Littoral Combat Ships built by Lockheed Martin, General Dynamics (GD 1.18%), and Austal, are considered leading contenders. That said, Capt. Jerry Hendrix (U.S. Navy, retired) mentioned the Type 26, FREMM, and F-105 designs favorably in a recent column on the subject in The National Interest. Hendrix even goes so far as to urge the Navy to give these ships full consideration, and not limit its examination to LCS-derived boats.

And if the U.S., and Canada too, can reap production efficiencies by teaming up to buy, in bulk, a warship design already appealing to both countries? Well, that seems like an argument in favor of combining efforts into a single acquisition program.

The timing seems right. Canada expects to begin building ships "starting in the 2020s," according to Canada's Chronicle Herald. The U.S. Navy, too, wants its frigates to begin construction in 2020, and for construction of a full complement of 20 warships to be complete by 2030.

Pricewise, Canada appears to be budgeting about $3.15 billion per ship ($47.3 billion spread over 15 ships) for CCS. That's a lot more than the $950 million that the U.S. Navy wants to pay for its frigates. Then again, if the U.S. can buy frigates for less than $1 billion apiece, this would seem another argument in favor of Canada joining with the U.S. to buy frigates in bulk -- and score some savings for itself in the process.

What would the U.S. get out of such an arrangement? Well, it could mend some fences for one thing. Earlier this year, Canadian feathers got ruffled when American planemaker Boeing (BA 2.28%) petitioned the U.S. International Trade Commission to sanction Canadian planemaker Bombardier for selling CSeries civilian airliners in the U.S. at prices Boeing believed to be below market.

Canada took this petition as a personal affront, and in a tit-for-tat move announced earlier this month that to "defend the interests of Bombardier" it would nix a plan to buy Boeing F/A-18 fighter jets for its air force.

Allowing Canada to join with the U.S. Navy in building a fleet of frigates would be a nice gesture, and a way to show we can play nice with our neighbors to the north, perhaps assuaging hurt feelings. If it helps both countries buy warships for their navies at a discount, then that would be a nice plus, too.

For the time being, both countries are going it alone. Canada will be evaluating the bids it has received over the next several months, and pick a "preferred bidder" in mid-2018, awarding construction contracts shortly thereafter. America's plan is to collect all bids by early next week (December 18) and award "conceptual design contracts" in 2018, but delay the final award of a construction contract until 2020 -- at which point construction would commence immediately.

The timelines may not line up exactly, but it looks to me like there's the potential here, at least, to strike a deal that will benefit taxpayers in both countries.