They don't get the hype that Alphabet and NVIDIA receive. But these are great AI stocks, too.

You can't have a conversation about investing in artificial intelligence (AI) without having companies like Google parent Alphabet (GOOG -2.74%) (GOOGL -2.63%) and chipmaker NVIDIA (NVDA -2.62%) come up. That's for good reason, since those two stocks rank among the top AI stocks on the market.

But AI investing isn't limited to Alphabet and NVIDIA or other big companies frequently mentioned. I suspect that many investors are overlooking other promising stocks poised to profit from AI. Micron Technology (MU -1.50%), Salesforce.com (CRM -3.35%), and Yext (YEXT -6.20%) are three stocks that should also benefit significantly from the AI revolution. 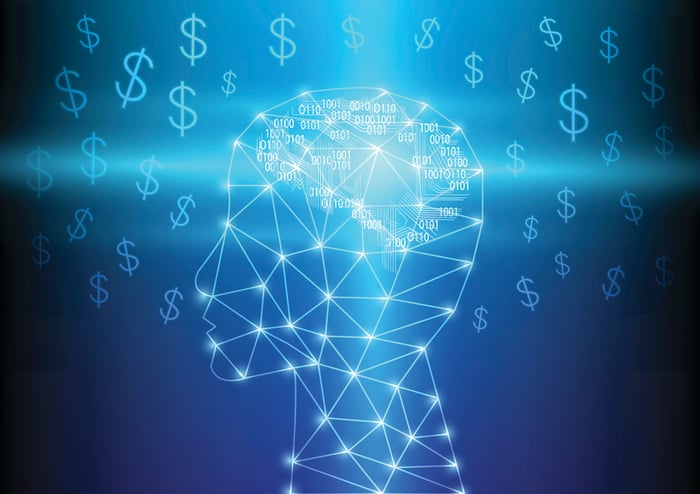 Top AI approaches such as machine learning and deep learning involve processing huge amounts of data. That data processing requires a lot of memory. Micron Technology ranks as one of the global leaders in providing the kind of memory chips in the highest demand for AI.

NVIDIA has been using Micron's memory chips for a while now. The company's technology innovations announced this year have deepened its relationship with the AI leader. Micron's innovations have also positioned it to grow revenue as AI-powered autonomous cars hit the market over the coming years. In September, the company introduced new memory chips that provide a foundation for next-generation autonomous vehicles. Micron also announced that it was partnering with leading automotive partners and customers to develop more high-bandwidth memory technology to power fully autonomous vehicles.

While Micron hasn't received the attention from AI investors that NVIDIA has, neither has it been ignored. The stock is up over 90% year to date. Unlike NVIDIA, though, Micron isn't valued at nosebleed levels. Micron shares trade at only six times expected earnings despite the huge gain so far in 2017.

Many investors focus largely on companies that provide the hardware used for AI. However, there are also great software picks. In my view, Salesforce.com is one of the best AI-related software stocks. AI is so important for Salesforce that executives stated on the company's third-quarter conference call in November that it's the key for how the company will hold on to its leadership position in the customer relationship management (CRM) market.

Salesforce launched its Einstein AI integration in 2016 and added new capabilities this year. Einstein weaves AI throughout Salesforce's core CRM platform. What does Einstein do? A lot. It uses data mining and machine learning to forecast future sales performance. It informs sales staff when a competitor shows up in the news. It uses AI to identify which deals are most likely to close. It uses natural language processing to pick out the most important emails in sales staff's inbox, and even suggests a response. And there's more.

You're not going to get a bargain with Salesforce, though. The stock trades at nearly 60 times expected earnings. But I wouldn't be overly concerned about that sky-high multiple. Salesforce has been even more expensive in the past without holding back its stock performance.

The least-known of these AI stocks that you might have overlooked is Yext. It's possible that you haven't even heard of Yext, since the company only held its initial public offering in April. However, Yext could be one of the best up-and-coming AI stocks around.

Yext's key product is a knowledge engine platform that lets businesses manage their digital knowledge in the cloud and sync that knowledge to over 100 services, including Bing, Cortana, Google, Google Maps, and Siri. The company calls this "digital knowledge management" and touts its ability to enable businesses to facilitate face-to-face and digital interactions with customers that boost brand awareness and lead to higher sales. Yext's customer base includes a long list of banks, hotels, retailers, and other companies -- many of which are household names.

It's been an up-and-down year for Yext stock since the company's IPO. Shares are now down nearly 10% but could probably bounce right back anytime. Although Yext isn't profitable yet, the company made over $44 million in revenue in the third quarter, a year-over-year increase of nearly 39%.

Which of these AI stocks is the best pick for investors? Since it's the smallest of the group, Yext probably has the greatest upward potential. However, it also comes with the most risk. Salesforce is the biggest of the three, with a market cap of $75 billion. Despite its steep valuation, I expect the stock will keep going higher in 2018.

I think the best pick, though, is Micron. The company is definitely set to profit from growth in use of AI. It's joined at the hip in some respects with NVIDIA. And the stock is cheap. Factoring in growth prospects, it's dirt cheap. If you could only buy one of these stocks, I'd recommend Micron.