Please ensure Javascript is enabled for purposes of website accessibility
Log In Help Join The Motley Fool
Free Article Join Over 1 Million Premium Members And Get More In-Depth Stock Guidance and Research
By Keith Speights - Dec 17, 2017 at 8:16AM

These members of dividend royalty could be big winners in the new year.

It's quite an honor for a stock to land on the list of Dividend Aristocrats. Income investors like the stability of large-cap stocks that have not only paid out but also increased their dividends for 25 or more years in a row. But some Dividend Aristocrats are better than others.

Several of the nearly 50 Dividend Aristocrats look like good picks as the new year approaches. Which are the best? I'd put Abbott Labs (ABT -1.32%), AbbVie (ABBV -0.78%), and General Dynamics (GD 0.50%) near the top of the list. Here's why these are three top Dividend Aristocrats to buy for 2018. 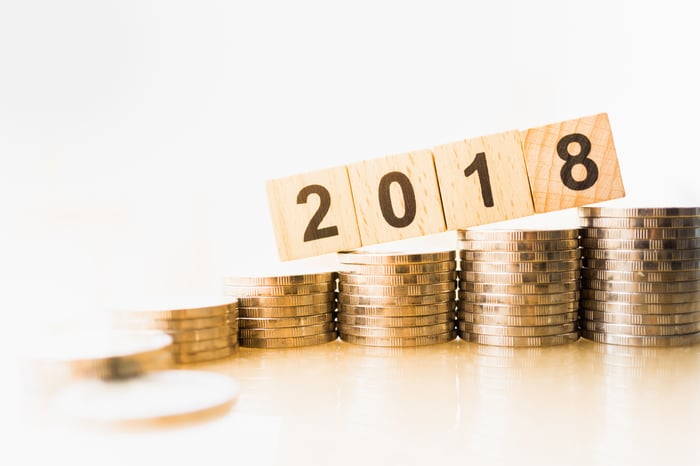 Abbott Labs' track record of 45 consecutive years of dividend increases easily landed the healthcare company on the list of Dividend Aristocrats. The company's dividend currently yields a respectable 1.94%. However, it's not the dividend that interests me the most with Abbott.

2017 has been a tremendous year for Abbott, with the stock gaining over 40%. Revenue and earnings soared, thanks primarily to what I view as a really smart acquisition. In January, Abbott closed on its $23.6 billion buyout of St. Jude Medical. This acquisition positioned the company as an even more formidable competitor in the cardiovascular market.

That wasn't the only major deal for the company this year. Abbott completed its acquisition of Alere in October. This purchase established Abbott Labs as the leader in point of care testing, which is the fastest-growing segment of the $50 billion global in vitro diagnostics market.

Acquisitions aren't the only reason I like Abbott stock, though. The company won FDA approval in September for its FreeStyle Libre Flash Glucose Monitoring System, the first approved continuous glucose monitoring system that doesn't require a finger-stick blood sample. The potential for this system is so great that I recently picked Abbott as the best diabetes stock on the market.

There's also a whole lot to like about Abbott Lab's "child" -- AbbVie. Most Dividend Aristocrat lists include AbbVie, crediting the big pharma with Abbott's years of dividend increases before AbbVie's spinoff in 2013. AbbVie claims a more appealing dividend than its parent, with a yield of 2.96%.

The drugmaker also enjoyed its best year ever in 2017, with its stock soaring more than 50%. AbbVie benefited greatly from an agreement with Amgen that keeps a biosimilar rival to top-selling Humira off the U.S. market until early 2023.

With Humira's position more secure, AbbVie now projects sales for the drug of close to $21 billion by 2020. The company also has time for its current products and pipeline programs to contribute more revenue. AbbVie's sales for cancer drug Imbruvica are expected to double over the next three years. New hepatitis C drug Mavyret should become the company's next blockbuster.

General Dynamics has increased its dividend for 26 consecutive years -- just over the threshold for joining the Dividend Aristocrats club. The defense contractor's dividend now yields 1.68%. General Dynamics is in the best position of any of the three companies mentioned to increase its dividend in the future, though, with a low payout ratio of 31%.

2017 hasn't been the greatest of times for General Dynamics shareholders. The stock is up by a double-digit percentage so far this year, but shares have dropped over the past couple of months with the company's mixed results in the third quarter.

I think 2018 could be better for General Dynamics. Corporate tax reform in the U.S. holds the potential to boost spending, which could benefit the company's Gulfstream business jet business. It could also spur General Dynamics to make some strategic acquisitions that could fuel growth.

General Dynamics stock, like other defense stocks, is cyclical in nature. However, with potential hot spots such as North Korea and the Middle East, I suspect U.S. military spending won't slow down anytime soon. That's good news for General Dynamics.

I own shares of one of these Dividend Aristocrats and think it's the best of the group. Which stock is it? AbbVie.

Don't take my word for it, though. Just look at the numbers. As we already saw, AbbVie has the highest dividend yield of the three. It also has the most attractive valuation, with shares currently trading at less than 15 times expected earnings. In addition, AbbVie should have the greatest growth prospects over the next few years. Add all this up, and I think you'll agree with me that AbbVie stands out as the best investing option among these three solid Dividend Aristocrats.