Pity Boeing's (NYSE:BA) shareholders. It's starting to look like they bought stock in the gang that couldn't shoot straight.

As a founding member of the nine-nation international coalition that helped Lockheed Martin (NYSE:LMT) design its F-35 stealth fighter, Canada was logically expected to buy this fighter from Lockheed Martin to replace its aging fleet of 60 Boeing-built CF-18 Canadian-variant F/A-18A fighters. At least, that was the plan up until last year. Then, price worries caused Canada to give Boeing a second look, and consider buying at least a handful of new F/A-18s instead while it mulled new plans for a larger acquisition.

Then came the trade war. Irked at Canadian planemaker Bombardier (OTC:BDRBF) making inroads in the United States by selling small commercial airliners at as much as 70%-off list price, Boeing petitioned the U.S. International Trade Commission to levy import tariffs on the Canadian company. Canada didn't like this idea one bit, and announced last week that in response, it is canceling its planned purchase of 18 new Boeing F/A-18s (a purchase that might have netted Boeing as much as $1.4 billion in revenue).

And that's where things got really weird. 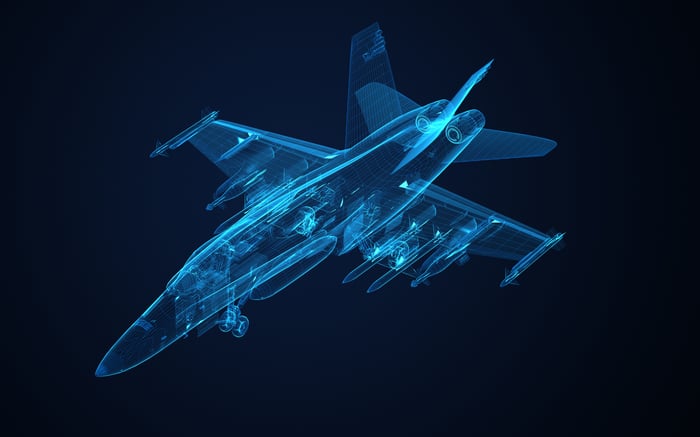 Canada has a plan for having getting itself some F-18s on the cheap -- and Boeing might not like it. Image source: Getty Images.

Buying Boeings, but not from Boeing

You see, Canada still likes the cheaper price tag on Boeing's fighters -- it just doesn't want to give Boeing any money, now that Boeing's is suing Canada's favorite aerospace stock. So instead of buying F/A-18s directly from Boeing, Canada's Public Services and Procurement agency made the following cryptic announcement on Tuesday:

Acquiring the aircraft that Canada's military needs ... is a top priority for the Government of Canada. The government is delivering on its promise to hold an open and transparent competition to permanently replace Canada's fighter fleet [with] 88 advanced fighter aircraft [at a later date. Meanwhile,] until permanent replacement aircraft are in place and fully operational ... the Government of Canada will pursue the purchase of 18 supplemental jets from the Australian Government.

Notice how Canada didn't say what kind of "supplemental jets" it will be buying from Australia? Funny story. AP is now reporting that Canada plans to buy Boeing F/A-18s ­-- but not from Boeing, but from Australia instead.

Granted, these will be used planes, but for this reason, they'll be much cheaper than the new F/A-18s Boeing was offering to sell Canada. The additional savings might even help Canada to bridge its budget gap and, when it comes time to buy its additional "88 advanced fighter aircraft," to be able to afford fifth-generation Lockheed Martin F-35s instead of fourth-generation Boeing F/A-18s.

(Speaking of which, in the same announcement in which it confirmed the Australian F/A-18 purchase, Canada noted that it plans to award this larger contract for "advanced" fighters in 2022, with delivery to begin in 2025.)

Thus, in one bold stroke, Canada nixed one billion-dollar-plus deal with Boeing and put the company at risk of losing another, even bigger sale down the road.

What it means for Boeing...and for Lockheed Martin

Now, bad as all this might sound, it's not really a death blow for Boeing. As my fellow Fool Lou Whiteman pointed out earlier in the week, "even without the Canadian order, the outlook for the Super Hornet program today is much healthier than it was just 18 months ago." Between purchases by the U.S. Navy and by other international buyers, Boeing now believes it has enough F-18 work in its pipeline to keep its production lines buzzing with Super Hornets well into the 2020s.

Still, Boeing had a much bigger target in its gunsights -- a chance to pry away a founding member of Lockheed's F-35 consortium and sell dozens upon dozens of F/A-18s Super Hornets directly to Canada. Unless and until it resolves its trade dispute with Bombardier, that opportunity may be gone for good, and Lockheed will get a second chance to book as much as $30 billion in additional F-35 sales to our neighbor to the north -- and at increasingly lucrative profit margins, too.

Good news for Lockheed Martin -- but bad news for Boeing.