Canada, as expected, has fired back at Boeing (NYSE:BA) over the aerospace giant's trade complaint against Canadian manufacturer Bombardier (OTC:BDRBF). It's a drop in the bucket for Boeing for now, but problems could escalate quickly if the company doesn't tread carefully.

The Canadian government said Dec. 12 that it would proceed as planned with a competition to buy 88 new jet fighters, but said it would disqualify bidders who caused "harm" to the national economy. Though Canada doesn't mention Boeing in the statement, the comments are a clear reference to Boeing's trade challenge accusing Bombardier of selling its CSeries passenger jet at a drastically discounted price. 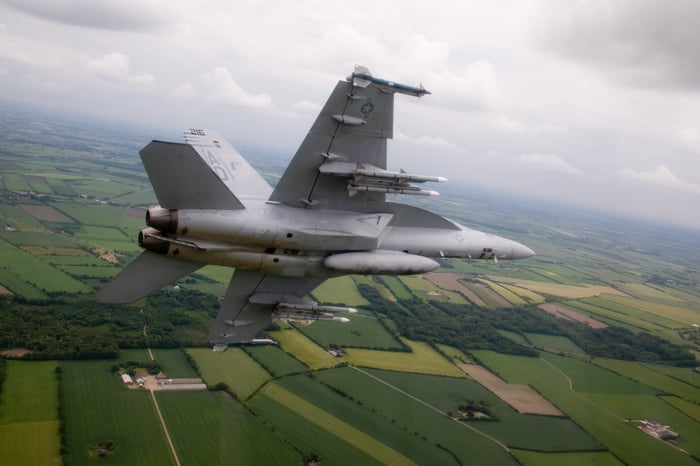 A Boeing F/A-18F Super Hornet in flight. Absent the trade dispute, the Super Hornet would be a favorite in the Canadian competition. Image source: Boeing.

The U.S. Department of Commerce in September issued an initial recommendation agreeing with Boeing's claims and proposing tariffs totaling 300% on the CSeries planes. That decision would effectively bar the CSeries from the U.S. market, putting the entire program and the jobs around the globe it supports at risk.

Canada is also scrapping a plan to buy 18 Boeing fighter jets intended as a stopgap, instead sourcing used jets from Australia.

Boeing could win the battle and lose the war

Boeing in response said it would review the project requirements and make a decision on whether or not to bid when the time comes. The company likely feels it is in a relatively good position despite the rhetoric coming from Canadian politicians: The Lockheed Martin F-35, one logical alternative to the Boeing F/A-18 Super Hornet, has previously been criticized in Canada as too expensive.

The Eurofighter Typhoon is another alternative, but Canadian military officials tend to favor buying U.S.-made products because it allows them to co-ordinate more seamlessly with their key North American ally. Buying the Super Hornet would also greatly reduce training costs.

The Super Hornet in recent years has enjoyed a renaissance of sorts, with the U.S. Navy slated to buy 80 frames over the next five years to address its fighter shortfall, and Boeing seems confident it can keep the production line going into the early 2020s.

But Canada has other upcoming projects, including new aerial refueling tankers and drone aircraft, as well as an upgrade in its space satellite program. Since Boeing would likely be among the favorites to win those contracts, the company would miss out on billions in revenue if the CSeries dispute causes Canada to shy away from Boeing in future competitions.

Trouble across the pond as well

A bigger worry for Boeing would be if the United Kingdom followed Canada's lead. Bombardier is one of the largest manufacturing employers in Northern Ireland, and Boeing officials this week faced a British parliamentary committee angry about the CSeries dispute.

This is a particularly sensitive time to anger the Northern Ireland delegation to Parliament, given the Democratic Unionist Party's power via an agreement to support Theresa May's Conservative government. Prime Minister May in September said she was "bitterly disappointed" with the tariff decision, and then-Defence Secretary Michael Fallon warned Boeing's moves "could jeopardise" the company's chances to win future contracts.

Boeing Defense has a massive presence in the United Kingdom, with more than 1,300 employees spread across 23 locations and spending 1.8 billion British pounds ($2.4 billion) annually on a local supply chain that includes more than 250 vendors. The British military currently flies Boeing products including the Chinook and Globemaster transports, the Sentry radar plane, and a license-built version of the Apache Longbow attack helicopter.

The spat also comes at a time when the White House is urging its NATO allies to spend more on defense, and European politicians are responding by pushing governments to spend more on European-made options instead of buying planes from Boeing and Lockheed Martin.

The easiest way out of this mess, at least from Boeing Defense's perspective, would be if the U.S. International Trade Commission significantly softens the blow on the CSeries when it issues a final ruling on the tariffs in February. Trade officials could also determine that a deal reached between Bombardier and Airbus in October to do final assembly on the CSeries in Alabama is enough to circumvent the tariffs.

The longer this dispute goes on and the more headlines it generates, the more likely it is that politicians will demand a pound of flesh. If the CSeries doesn't make it into the U.S. market, Boeing Defense could be at a disadvantage when competing internationally for some time to come.