Please ensure Javascript is enabled for purposes of website accessibility
Log In Help Join The Motley Fool
Free Article Join Over 1 Million Premium Members And Get More In-Depth Stock Guidance and Research
By Travis Hoium - Dec 17, 2017 at 11:39AM

Solar installations in the U.S. were down in the third quarter. There's one big reason.

The simple threat of solar tariffs in the U.S. is already taking a bite out of the solar industry as customers large and small feel the pinch of higher costs. The Solar Energy Industries Association and GTM Research released their U.S. Solar Market Insight Report for Q4 2017 (covering Q3 2017) this week, which showed installations plunged 51% to 2,031 megawatts (MW).

A decline in solar installations isn't entirely unexpected, but it's surprising how big the drop was and where it's hitting the industry. Here's what investors need to know. The big picture for solar

The 51% decline in installations to 2,031 MW is the headline number, but the full-year projections are arguably more notable because they pull out some of the lumpiness of solar installations. GTM Research lowered its full-year guidance by 600 MW to 11.8 gigawatts (GW), which would be a 22% drop from 2016's installation level.

It's worth noting that 2016 was a bit of an outlier because developers were rushing to build projects that were originally slated to begin operation before the solar investment tax credit was expected to fall at the end of 2016 before it was restored. So, it's not necessarily alarming that installations will be down, but the scale of the decline is concerning. 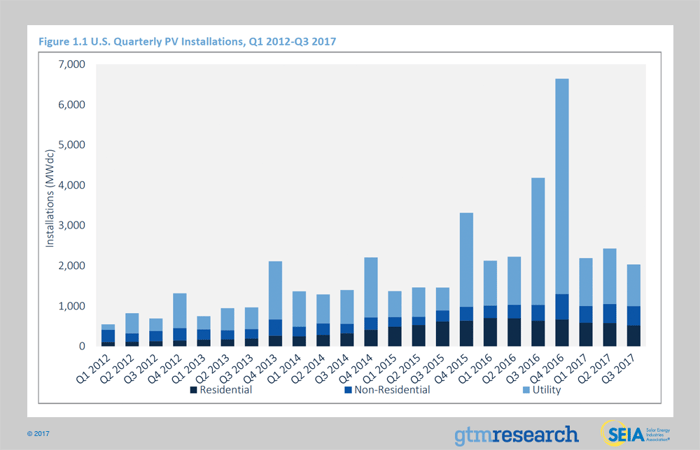 Utility solar is the big loser

Given the rush of utility-scale projects built in 2016, it's not a surprise that utility solar installations were down compared to a year ago, despite being 51% of all installations in Q3 2017. Higher solar panel prices drive overall costs higher, making systems less economical for developers.

If investors should worry about any segment of the solar industry as President Trump considers solar tariffs, it should be utility-scale solar. These systems will be the most impacted by higher solar panel prices, and we could see installations decline in 2018 as a result.

The residential solar industry installed less in Q3 than any quarter since Q1 2015, a shocking turnaround for an industry that should be becoming more competitive. But the report put the blame on installers like Sunrun (RUN 1.63%), Vivint Solar (VSLR), Tesla (TSLA 4.67%), and SunPower (SPWR 3.62%) focusing on profitable customers rather than growth as the reason for the decline in installations.

For investors, a focus on profits over growth may be a good thing, but it makes for some strange data coming from reports like this. Residential solar is down, but in this case that may be a good thing for solar investors who have seen installers pummel each other to grow over the past decade.

Commercial solar is the standout

Commercial solar projects, which often are built on warehouses or retailers, were the big surprise in the third quarter, rising 22% to 481 MW. Growth in community solar programs was a noted driver of the increase, but businesses are also finding solar, sometimes including energy storage, to be more economical as well.

Tariffs and the tax bill are presenting a massive amount of uncertainty for the solar industry, and until both are finalized, I wouldn't expect much clarity on what the future looks like. The tariff outcome, in particular, could leave the solar industry with very little hope in 2018 or a very bullish outlook. We'll learn in about a month whether the future is getting brighter or dimmer for solar energy in the U.S.