Bitcoin has dominated the news in 2017 with its remarkable gains, and despite widespread skepticism among the financial establishment, the cryptocurrency has continued to make progress toward integrating itself into more mainstream transactions. Having seen more retailers willing to accept bitcoin, supporters of the virtual currency are now turning their attention to a key traditional banking function: lending using bitcoin as collateral.

Major banks haven't yet stepped up to the plate pitching bitcoin loans as a growth driver, but smaller niche institutions have popped up to explore the cutting edge of crypto-financing. There are two reasons bitcoin loans are about to become the next big thing with investors in the digital currency, and even if you have no intention of ever investing in bitcoin, you need to pay attention as the financial infrastructure to support crypto-lending gets built. 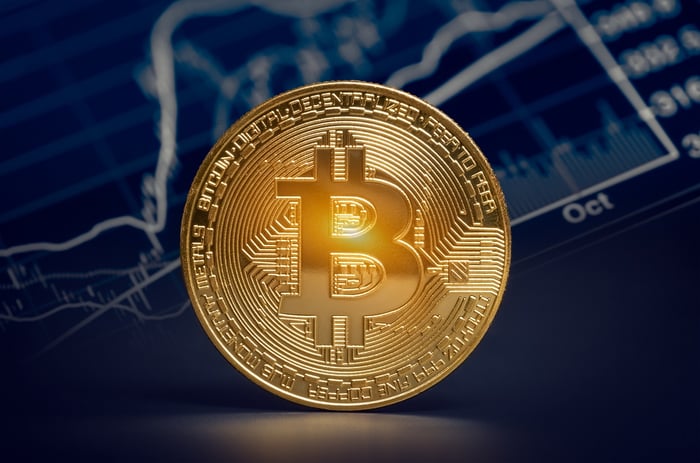 The most important reason making bitcoin-based loans is a potential growth industry is that there's a growing pile of wealth that bitcoin owners want to tap into without incurring huge adverse tax consequences. Under current tax law, whether you sell bitcoin in exchange for conventional currency or you spend it on goods and services, the IRS taxes you on any gain between what you paid for that bitcoin and its value in U.S. dollars when you sold it. The resulting capital gain gets taxed either at ordinary tax rates for bitcoin held for a year or less or long-term capital gains rates if you owned the cryptocurrency for longer than a year.

A loan, however, isn't a taxable event. If you put up bitcoin as collateral for a dollar-based loan, then you can spend the money immediately without having to pay any taxes on the gain in value in your bitcoin holdings. You're on the hook to pay back the dollar-based loan, but you can sell bitcoin later on when the loan comes due and defer any taxes until that later sale. Alternatively, you can presumably extend the loan if your lender agrees -- as long as the value of the bitcoin collateral remains adequate to secure the loan. Desire to avoid taxes will drive demand for bitcoin loans.

The potential problem with bitcoin loans has been on the lending side. Until recently, any institution that wanted to make bitcoin loans had no reasonable way to hedge against a catastrophic drop in the value of their collateral. For instance, a bank might lend $10,000 to someone, taking a single bitcoin as collateral. When the value of that bitcoin is in the $15,000 to $20,000 range, that leaves plenty of room for downward price moves, but the bank could still face a potential loss if bitcoin falls below $10,000 and the borrower has no other financial assets on which to collect.

That changed when the CBOE began trading bitcoin futures earlier this month. Now, a financial institution can use futures-based risk management techniques to hedge the potential exposure to a collapse in bitcoin prices. The larger CME bitcoin futures contracts will be even more useful for major lenders in hedging strategies. As long as there are enthusiastic bitcoin investors willing to take the other side of financial institutions' hedging transactions, then lenders will be able to protect themselves.

Is there systemic risk ahead?

As long as bitcoin loans have provisions that let lending institutions protect themselves from a volatile bitcoin market, then the resulting risk should be manageable. The danger is that if competition for bitcoin loans becomes fierce, lenders might relax their standards in order to gain more business. Without adequate protection, rapid dramatic changes in bitcoin prices could leave lenders vulnerable to more losses than they could handle.

Before major banking institutions are likely to become involved in bitcoin loans, you can expect that they'll have their hedging strategies worked out more precisely. For now, though, the smaller players involved in such transactions are likely to make mistakes from which the market can learn in the years ahead -- regardless of what happens to bitcoin prices in the interim.