The database giant is promising to beat Amazon on price by as much as 80% with its new autonomous database cloud.

Oracle's (ORCL -0.31%) cloud computing business is a fraction of the size of market leader Amazon (AMZN -2.44%) Web Services. While AWS produced $4.6 billion of revenue in Amazon's latest quarter, Oracle's total cloud revenue was just $1.5 billion. Most of that came from software-as-a-service sales, with infrastructure-as-a-service and platform-as-a-service revenue adding just shy of $400 million.

Oracle will (probably) never be as big as Amazon in the cloud, but what it can't afford to do is lose database customers. Amazon's database market share was just 2.3% in 2016, compared to over 40% for Oracle. But with AWS so dominant elsewhere in the public cloud market, its percentage is bound to rise. Oracle's strategy for repelling Amazon's inevitable charge is to compete aggressively on price. And Oracle Executive Chairman Larry Ellison signaled the company was doubling down on that plan during its most recent earnings call. 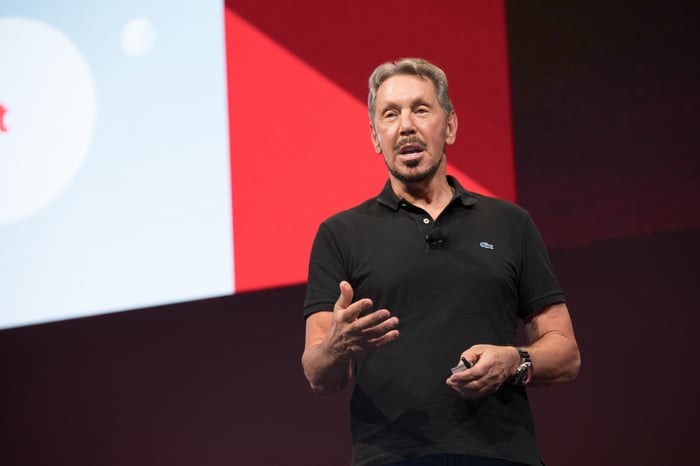 20 cents on the dollar

Ellison had a lot to say about this new product during Oracle's earnings call. The version aimed at data warehousing will be available in January, and Ellison says he expects it to "dramatically accelerate the growth of our PaaS and SaaS businesses and keep our database license business strong as well."

Ellison compared the autonomous database to Amazon Redshift, the data warehousing solution available on AWS. "In a series of published benchmark tests the Amazon Redshift database on average costs five times more to run the same exact amount of work as the Oracle Autonomous Database."

He reiterated that point. "Let me repeat that. If you take a workload from Amazon running on Redshift and move it over to Oracle, your Amazon bill will drop by 80%. It will cost you five times more to run Redshift than to run the Oracle Autonomous."

That promise isn't just marketing fluff. Oracle will allow customers to lock-in those savings in writing. "We're so confident of our cost advantages over Amazon that Oracle will provide our customers with written service level agreements that guarantee, that guarantee moving to the Oracle cloud will cut Amazon customer's database bills in half or substantially more than half."

Versions of the autonomous database aimed at tasks other than data warehousing are expected later in 2018. If those come with the same aggressive pricing relative to Amazon, this could be the start of a wider database price war.

Oracle's cloud database strategy has two aims. First, the company needs to provide its existing on-premise database customers -- those that run Oracle Database on their own hardware -- a path to the cloud that doesn't involve Amazon. Second, the company clearly wants to lure away AWS customers.

If Oracle truly delivers on its promise to  consistently undercut AWS, price cuts from Amazon are all but guaranteed. That could trigger price cuts from other cloud infrastructure providers. Both Alphabet's Google and Microsoft offer various cloud database products. In the data warehousing market, for example, Google offers BigQuery and Microsoft offers SQL Data Warehouse.

Whether Oracle can produce the same outsize profits from cloud databases as it currently does from selling on-premise database licenses remains to be seen, especially with a price war potentially looming. Existing on-premise customers are unlikely to switch away from Oracle, but companies just reaching the point where they need to pick a provider have far more choices than were available even a few years ago.

After the initial autonomous database announcement, an AWS representative told Business Insider that Oracle's claims were nonsense. "No facts, wild claims, and lots of bluster." We'll find out soon enough whether Amazon should be worried about Oracle's cloud database push.