Please ensure Javascript is enabled for purposes of website accessibility
Log In Help Join The Motley Fool
Free Article Join Over 1 Million Premium Members And Get More In-Depth Stock Guidance and Research
By Rich Smith - Dec 18, 2017 at 6:13AM

The Navy has Marines. Shouldn't the Air Force have Space Marines?

On Tuesday, President Donald Trump signed the fiscal 2018 National Defense Authorization Act (NDAA) into law, approving $692 billion in military spending next year. Included in the budget were $626 billion for "base" Pentagon spending and an additional $66 billion for overseas contingency operations (i.e. fighting wars in Iraq, Syria, and Afghanistan).

Not included in the budget, though, was a Space Corps. 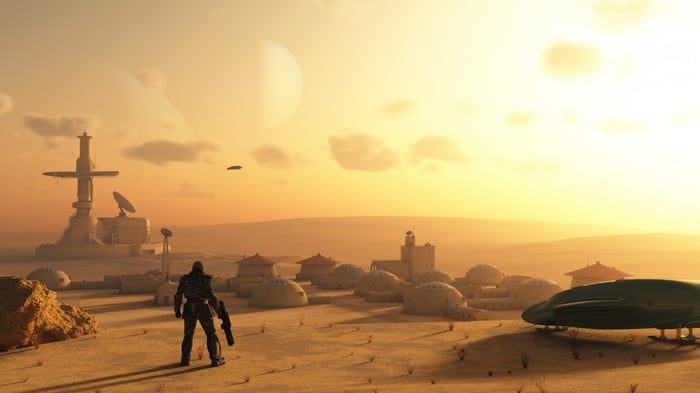 How do you expect to conquer Mars without a corps of Space Marines? Image source: Getty Images.

What the heck is a Space Corps?

Up until a couple months ago, this wasn't a sure thing. When the House of Representatives passed its version of the NDAA in November, Representatives called for the Pentagon to set up a new, sixth branch of the U.S. military. Subordinate to the Department of the Air Force, it would have focused on:

The new military branch would have been dubbed, appropriately, the "Space Corps."

Why a Space Corps?

Why might building a separate Space Corps be a good idea? As Congress states in the NDAA, "defending and securing the space domain" against "evolving space threats" is "critical" to the national defense.

The reason boils down to holding the "high ground." As the Navy's Space and Naval Warfare Systems Command (SPAWAR) explains, "Space is the ultimate high ground." Satellites in orbit have an unparalleled vantage point from which to survey the battlefield for purposes of performing "intelligence, surveillance, and reconnaissance (ISR); missile warning; environmental monitoring; satellite communications; and position, navigation, and timing." In any 21st Century military conflict, control of space will be as important as control of the air was in World War II.

Such a crucial mission, it follows, deserves a military branch dedicated to ensuring success, much like the Air Force itself was given a separate command structure after serving subordinate to the Army in WWII. At the very least, the very specific space mission deserves a branch-within-a-branch, such as the U.S. Marine Corps has within the Department of the Navy, and its own seat at the table, in the form of a "Chief" to sit among the Joint Chiefs of Staff.

...and why the Pentagon hated the idea

This is not, however, a universally popular proposal. To the contrary, the Air Force opposed it, as did Secretary of Defense James Mattis and Chairman of the Joint Chiefs of Staff Gen. Joseph Dunford. In the U.S. Senate, not only did Senators not support the plan -- they actually forbade it. When all was said and done, the merged House and Senate versions of the NDAA deleted all mention of a "Space Corps", and the President signed that into law.

On the other hand, the NDAA also instructs the Deputy Secretary of Defense to "identify a [new] recommended organizational and management structure for the national security space components of the Department of Defense, including the Air Force Space Command" -- which suggests that change of some sort is afoot.

Furthermore, the Deputy SecDef is instructed to hire a "federally funded research and development center that is not closely affiliated with the Department of the Air Force to develop a plan to establish a separate military department responsible for the national security space activities" (emphasis added). Bluntly put, the Air Force is being instructed to "butt out" of this debate, and let the President decide whether to create a Space Corps.

While no Space Corps will be formed in 2018, this does appear to be the direction in which Congress wants to be moving.

In the meantime, the NDAA also calls for the Air Force to "streamline acquisition" of military hardware to be used in space, and to "protect the development of the space cadre" within Air Force ranks -- possibly preparatory to shifting it into a Space Corps at some point in the future.

This suggests that the creation of a Space Corps -- one outside of and independent from the U.S. Air Force -- could be a boon to investors. On the one hand, "streamlined acquisitions" could very well result in more money flowing to smaller space contractors like Kratos Defense (KTOS 1.09%) and Aerojet Rocketdyne (AJRD 1.50%), yielding greater profits and faster revenue growth. At the same time, the more the Pentagon moves to separate out space operations from the Air Force's more down-to-earth operations, the more visibility we will get into the importance of "space" to the businesses of larger companies like Boeing (BA -1.25%) and Lockheed Martin (LMT 2.64%), both of which work in the air and space.

As readers of my regular coverage of the Pentagon's daily contract briefings are aware, contracts for the purchase of military gear for the U.S. Marine Corps are often confusingly designated as being for the Navy, to which the USMC is subordinated. Similar confusion arises with Air Force contracts, which regularly group "evolved expendable launch vehicle" contracts for satellite launches awarded to the Boeing and Lockheed Martin joint venture United Launch Alliance, for example, under the category of "Air Force" contracts.

In fact, in a recent report entitled "Investment Implications of the Final Frontier," investment banker Morgan Stanley calculated that the U.S. government spends about $24.8 billion annually on "national security" projects in space, and $43.9 billion on space in general. But MS was only able to trace back about $6.3 billion of that spending to specific military projects. If even big investment banks get stumped by such obscurity, what chance do small, individual investors like us have?