Please ensure Javascript is enabled for purposes of website accessibility
Log In Help Join The Motley Fool
Free Article Join Over 1 Million Premium Members And Get More In-Depth Stock Guidance and Research
By Brian Stoffel - Dec 19, 2017 at 10:31AM

The year was 1978. The place: Austin, Texas. That's when a young man named John Mackey and his girlfriend decided to strike out on their own and start a health-focused grocery store.

While the journey to nationwide chain was bumpy, the basic idea at the foundation of it all remained unchanged: healthy, sustainably sourced food is good for all stakeholders -- customers, employees, management, and the environment.

It was a brilliantly forward-thinking idea that most people ignored for three decades. And while the execution of that idea was hamstrung by the Great Recession, the overall results were resoundingly positive. Comparable stores sales (comps) -- the key metric to measure success in grocery stores -- were the envy of the industry, most of whom would have been happy with 3% growth. 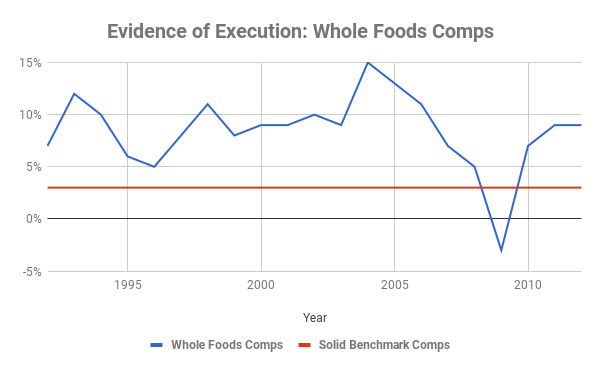 But starting in 2012, something unexpected started happening. Other grocers began catching on to Whole Foods' game. In the blink of an eye, the competition caught up. Not only were there smaller specialty players like Sprouts Farmers Market, but big-box retailers like Costco and Wal-Mart built out their own organic brands.

Here's what that did to comps. 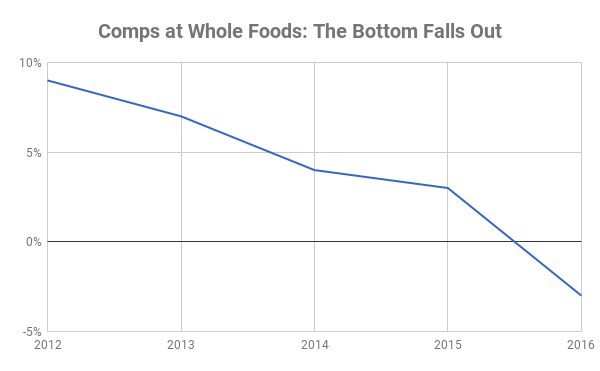 Whole Foods is a textbook case in the dangers of investing in a company without a moat. Otherwise known as a sustainable competitive advantage, a moat's effect is simple: it is that special force keeping customers coming back for more year after year, while keeping the competition at bay for decades.

There are four broad types of moats:

Whole Foods was based on a brilliant idea, and while the execution may not have been "flawless", it was pretty darn close.

But take a look at the moat. Whole Foods has none. Perhaps an argument could be made for the brand, but even then, the results clearly show customers don't have allegiance to any grocery store.

The framework for how this plays out is:

Where else is this happening?

Whole Foods is far from being alone in this predicament.

Another prime example is Casey's General Stores (CASY 0.87%). The company realized it was onto something by offering up in-house pizza at its convenience stores in locations across Small Town, USA. 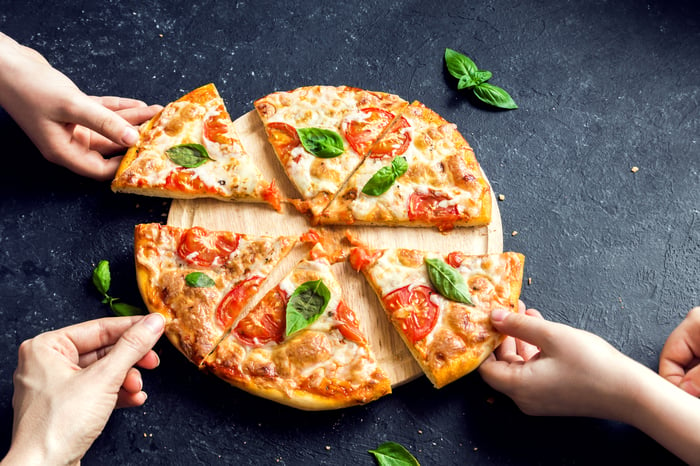 Comps for the segment soared above 10% and shares boomed. But as the company expanded -- and as other players caught on -- those comps came back to earth. While Casey's operations will survive, investors are stuck with a stock that's flat over the past 28 months while the market has advanced over 25%.

High-fliers without a moat?

I am also cautious about two high-flyers that haven't seen competition encroach...yet. Both NVIDIA (NVDA -4.20%) and Arista (ANET -0.35%) have seen shares explode since February of 2016. 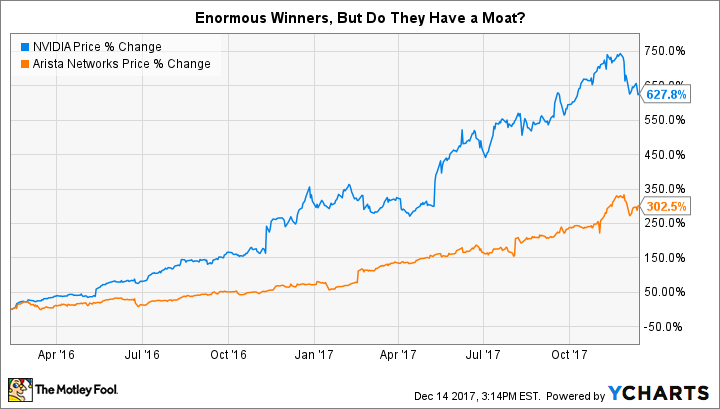 The former's catalysts are its graphics processing units (GPUs), which are in high demand for gaming, AI, and cryptocurrency mining. The latter has gotten huge by making it easier for companies to analyze and speed up the transmission of data that they have.

Both are uniformly praised as leaders in their niches. But do a little digging and you'll see that neither has a discernible moat. That means one of two things will happen over time:

I'm not willing to short either company or give either an "underperform" rating on my CAPS profile because I have no idea when this expectation could come to fruition. I italicized the word expectation to differentiate it from a forecast. As former Fool Morgan Housel recently pointed out:

"An expectation is the belief that certain events will occur over time...A forecast is a complex attempt to merge expectations with the calendar...An expectation forces you to prepare for an inevitability without requiring near-term actions -- often counterproductive -- that forecasts push you toward. Try surrounding yourself with more expectations and fewer forecasts."

I don't know when the competitive reckoning that I predict could come true. Tesla recently announced it would start making its own GPU, and cloud giants like Amazon and Facebook have already said they'd like to design their own switches.

But when, if ever, could this be an actual threat to either company? Maybe next quarter...or five years from now. I have no idea. And if it's five years from now, shareholders will surely be rewarded with continued growth from both companies.

My uncertainty doesn't mean that you should shy away from the NVIDAs, Aristas, and Caseys of the world. Rather, it's a reminder that even a great idea, perfectly executed, is at risk of commoditization if there's no moat protecting the underlying business.