For the most part, it's been a good year for virtual reality (VR) and augmented reality (AR). The VR market shipped over 1 million VR headsets in the third quarter, a major new milestone for the nascent technology, driven by a series of price cuts throughout the year that has bolstered adoption. The tech giants are also all investing heavily in AR, releasing a slew of tools this year for developers to innovate with.

Within those markets, market researcher IDC expects some important changes to occur in the years ahead in terms of product subcategories. Here's what investors need to know. 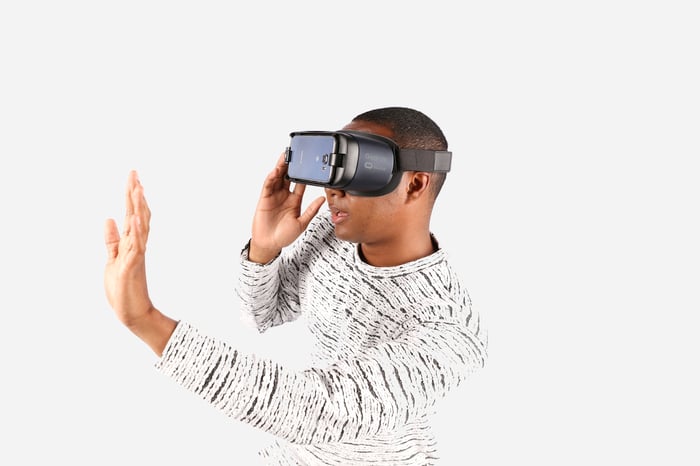 Fewer people will be strapping phones to their faces in the future. Image source: Oculus VR.

IDC estimates that there will be approximately 9.6 million total units shipped in 2017, including both VR and AR headsets. This figure is expected to jump to 59.2 million by 2021.

Smartphone-based VR, where users strap their phones to their faces using specialized accessories, will comprise the bulk of shipments (59%) this year. That's largely expected, as the cost of entry is rather low: The accessories usually cost $100 or less to test drive VR on a phone that you already probably have. IDC calls these "screenless viewers," and expects that form factor's market share will fall to 15% in 2021. Prominent examples of VR screenless viewers include Alphabet (NASDAQ:GOOG) (NASDAQ:GOOGL) subsidiary Google's Daydream View or Samsung's Gear VR.

In its stead, stand-alone head-mounted displays (HMDs) and tethered HMDs will start to take over as the requisite technologies improve and costs come down. Tethered HMD should represent about 35% of the market this year, led by Sony's PlayStation VR and Facebook (NASDAQ:FB) subsidiary Oculus' Rift. Standalone HMDs are undoubtedly where the future is headed, but aren't too compelling as a product currently due to technical limitations.

Oculus announced the Oculus Go just a couple months ago, its first commercial stand-alone HMD. The price is right at $199, but it's not clear what the experience will be like since Oculus Go won't ship until 2018.

On the AR front, there wasn't a whole lot going on in 2017 in terms of dedicated hardware. Among all form factors combined, AR was just 2.4% of shipments.

However, Apple (NASDAQ:AAPL) at long last made its big splash into AR this year with the introduction of ARKit over the summer and the subsequent release of iPhone X in the fall. Google responded by releasing ARCore for Android in August. In April, Facebook made a big push into AR as well to complement its VR strategy, and added a handful of AR features to Messenger just last week. In other words, 2017 has been more about creating and releasing AR tools in order to lay the groundwork for future hardware.

Apple reportedly has an AR HMD in the works, as does Facebook. Even Amazon is exploring the category, while Microsoft plans to address both markets simultaneously with its Mixed Reality platform and Hololens, which combines AR and VR. IDC predicts that AR should grab about a third of the market (including all form factors) in 2021.

It's worth noting that there's a meaningful part of the market that is not captured in IDC's estimates: AR based solely on smartphones. IDC focuses on dedicated hardware, but iOS and Android are hoping to deliver compelling AR experiences through smartphones without strapping them to the user's face. That could explain why IDC doesn't expect the AR screenless viewer market to grow meaningfully, and IDC already tracks the smartphone market separately. Smartphone-based AR will still play an important role in the transition though, warming consumers up to the technology while developers start to create AR content that could be brought to dedicated AR platforms in the future.

I tend to put less weight into specific long-term forecasts since they're often wrong more than they're right, but the directional trends will likely prove fairly accurate overall. The VR and AR markets have some good years on the horizon.