Investors cheered the 115% rise in stock price at MercadoLibre (MELI 3.62%) over the past year -- but now they have reason to fear. According to a new report just out of Citigroup, MercadoLibre shares -- which approached $330 a share last night (and were upgraded by Piper Jaffray last week) -- is primed to fall $100 in price over the next 12 months.

Downgrading MercadoLibre stock to sell and assigning a new $230 price target, Citigroup warns in a note summarized on TheFly.com that "free shipping ... helped the company sustain high growth rates in the past two quarters." But "competition should intensify in key markets like Brazil, Mexico and Chile, as bricks-and-mortar retailers like Via Varejo, Magazine Luiza, and Falabella start to launch their own marketplace platforms." 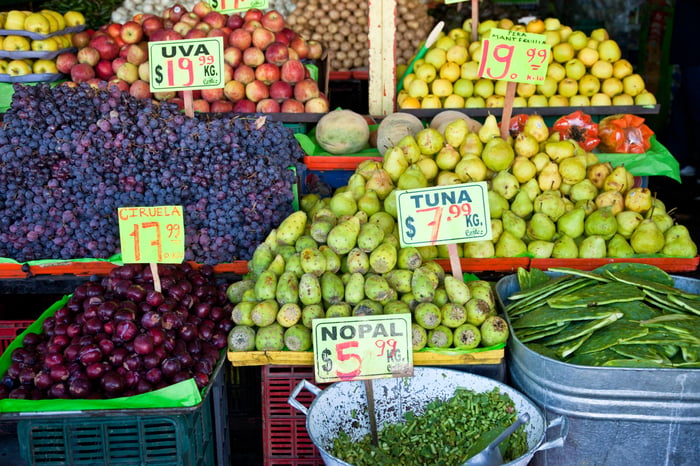 This has worried investors, who have sold off MercadoLibre stock by more than 4% already today -- but should it worry us? That may depend a lot on the strength of the competition that Citigroup is concerned about. So to gauge the risk, let's take a quick look at Via Varejo, Magazine Luiza, and Falabella and find out just how scary these rivals might be.

All three of the competitors are publicly traded companies (albeit according to Yahoo! Finance, only one of them, Via Varejo, trades in the U.S. -- and that one only on the OTC market). None of the three is a household name in the U.S.

That's not surprising, given that the three companies named are based in Brazil (Via Varejo and Magazine Luiza) and Chile (Falabella). The good news though, is that because all three companies are publicly traded somewhere, there's plenty of publicly available information on them available from financial data warehouse S&P Global Market Intelligence.

Starting down the road with Via Varejo

According to S&P Global, Via Varejo is a "consumer electronics, home appliances, mobile phones, and furniture" retailer operating 975 stores across Brazil, as well as several e-commerce websites. (Think of it as the Best Buy of Brazil.) Via Varejo sports a $2.9 billion market capitalization, makes $7.6 billion in annual sales, and over the past year, earned $43 million in profit on those sales.

Ninety-five percent of the company's sales are made via its brick-and-mortar stores.

Via Varejo's Brazilian rival, Magazine Luiza, sells consumer electronics, home appliances, and furniture as well, but does not break out e-commerce sales from is total merchandise sales numbers. It's both a bigger company than Via Varejo and a smaller one, booking just $3.4 billion in sales annually, but earning twice as much profit on them -- $82 million last year, according to S&P Global.

Accordingly, investors give the more profitable Magazine Luiza a bigger market capitalization than they do to Via Varejo -- $3.8 billion.

In Chile, we find the headquarters of Falabella -- and it's a much bigger operation. Spanning the nations of Chile, Argentina, Peru, Colombia, Uruguay, Mexico, and Brazil, Falabella sells...well, pretty much everything, including the kitchen sink. (Literally. They sell kitchen sinks.)

Falabella also sells clothing, accessories, and beauty products (like Sears). Building materials, hardware, and tools (like Home Depot). Falabella operates supermarkets like Kroger. And of course, Falabella sells home furnishings, and electronics, too -- just like Via Varejo and Magazine Luiza.

Falabella books $14.2 billion in sales annually, and earns $817 million a year on those sales. Investors think this justifies a market capitalization more than twice that of Via Varejo and Magazine Luiza combined -- $24.6 billion.

Sizing up the competition

On the one hand, Citigroup is right: The rich margins that MercadoLibre earns from operating a pure e-commerce business are sure to attract competition from its primarily brick-and-mortar rivals. On the other hand, these rivals have a lot of catching up to do. Sales at MercadoLibre grew 26% last year, and are on track to grow as much as 63% this year -- much faster than any of its rivals are growing. What's more, with wider profit margins to dip into, MercadoLibre has the ability to keep prices low, undercut its competitors, and continue widening its lead.

At a P/E ratio of 104 times trailing earnings, there's no denying MercadoLibre stock is expensive. But it appears to be expensive for good reason.