Rich Smith, Leo Sun, and George Budwell
(TMFDitty)
Author Bio
I like things that go "boom." Sonic or otherwise, that means I tend to gravitate towards defense and aerospace stocks. But to tell the truth, over the course of a dozen years writing for The Motley Fool, I have covered -- and continue to cover -- everything from retailers to consumer goods stocks, and from tech to banks to insurers as well. Follow me on Twitter or Facebook for the most important developments in defense & aerospace news, and other great stories besides.
Follow @RichSmithFool

Shares of Argentinean e-commerce giant MercadoLibre (NASDAQ:MELI) have been setting the Latin world on fire this year -- up 75% since the start of January. This is a stock we've recommended here at The Motley Fool in the past, and one we still recommend today. But what will we do for an encore?

To help come up with a few ideas, we've asked three of our favorite Foolish investors to name three of their favorite stocks -- stocks with the potential (not the certainty) to go where Mercadolibre has gone before and deliver 75% returns for investors in the future. Here they are: Baozun (NASDAQ:BZUN), Sarepta Therapeutics, (NASDAQ:SRPT) and LogMeIn (NASDAQ:LOGM). 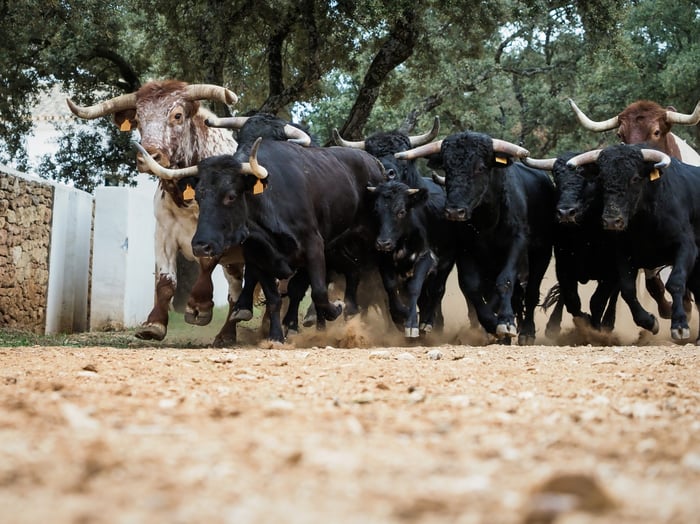 These bulls are stampeding. But which one will run farthest? Image source: Getty Images.

The Shopify of China

Leo Sun (Baozun): Baozun is a one-stop shop for Chinese companies that need to quickly establish an e-commerce presence. The company, which is often called the "Shopify (NYSE:SHOP) of China," provides digital storefronts, IT services, marketing campaigns, customer service, and fulfillment services for its customers.

Baozun's growth figures are jaw-dropping. Its revenue rose 31% to $488.3 million last year, and its non-GAAP net income soared 437% to $17.4 million. It posted a full-year GAAP profit of $12.5 million, compared with a net loss in 2015. Wall Street expects its revenue and non-GAAP earnings to respectively rise 24% and 112% this year.

Baozun already rallied 350% over the past 12 months, and it isn't cheap at 130 times earnings -- which is much higher than the industry average of 46 for specialty retailers. There are also concerns that e-commerce giants such as Alibaba (NYSE:BABA) or JD.com (NASDAQ:JD) could launch their own Baozun-like platforms to render the company obsolete. However, investors should remember that investors had similar fears that Amazon.com (NASDAQ:AMZN) would kill Shopify, but Amazon eventually partnered with Shopify instead.

Baozun is a risky stock, but the potential payoff is high. China has an internet penetration rate of just 52%, compared with 89% in the United States. Earlier this year, payment-processing company Worldpay estimated that the Chinese e-commerce market will grow 15% over the next three years. If Baozun remains the top company for bundled e-commerce solutions during that period, the stock could head much higher.

A growth stock with momentum

George Budwell (Sarepta Therapeutics): If you're looking for a stock that could be at the start of a long-tailed growth trend, rare-disease drugmaker Sarepta Therapeutics might be worth checking out. Although Sarepta's shares have been ripping higher in the past few weeks because of the faster-than-expected commercial uptake of its Duchenne muscular dystrophy (DMD) drug Exondys 51, there could be considerably more upside to come.

After crushing consensus on sales in the second quarter, for instance, the stock jumped a healthy 20% in a single day last week. Even so, some analysts think this mid-cap biotech could appreciate by yet another 50% in just the next 12 months.

The underlying reason for this stellar outlook among some industry insiders is that Exondys 51 is the only drug approved for this specific form of DMD that accounts for about 13% of all patients afflicted with this deadly muscle-wasting disorder. As such, bulls believe that this drug should get off to a particularly strong start -- despite the ongoing push-back from a handful of payers. And so far, the bulls appear to be spot-on in their assessment.

Looking ahead, Exondys 51 is forecast to eventually haul in over $1 billion in annual sales. If this line holds, Sarepta would turn out to be an incredible bargain at current levels, given its current market cap of roughly $2.4 billion. Orphan-drug makers, after all, tend to trade at double-digit multiples of their annual sales.

In all, this orphan-drug specialist appears primed to follow in the footsteps of other ultra-high-growth stocks like MercadoLibre.

Back then, LogMeIn seemed to have a great future ahead of it, as consumers and office workers, already using laptops to remotely access data stored on their desktops, prepared to begin using iPads for the same purpose. Today, nearly a decade later, LogMeIn is stronger than ever -- and in this respect, it looks a lot like MercadoLibre, going from strength to strength as it grows.

While its business is completely different from MercadoLibre's, a lot of the numbers at LogMeIn look similar. For example, MercadoLibre had a head start on LogMeIn, IPOing two years before LogMeIn did. But a similar "post-IPO age," two years ago, MercadoLibre stock was up an amount similar to where LogMeIn is today -- 365%.

Historical growth patterns, and projections for future growth are also similar. Both companies have achieved roughly 23% annualized sales growth over the past five years . Analysts who follow MercadoLibre stock see it growing earnings at 32% annually over the next five years. Projections for LogMeIn are for an even stronger 39% earnings growth rate .

The big difference between the two stocks, as I see it, lies in the fact that LogMeIn, having recently acquired LastPass and just undergone a transformative merger with Citrix's GoTo business, is working off a lot of merger-related charges that have its earnings reading negative, whereas MercadoLibre, continuing on its own, is more firmly GAAP-earnings-positive. Over the past 12 months, for example, LogMeIn has recorded charges of more than $28 million for amortizing its acquisitions costs, and a further $45 million in merger and restructuring charges. Without those charges, LogMeIn would be firmly profitable. With them, its income statement is showing a $15 million annual loss.

But here's the thing: Accounting wrinkles notwithstanding, LogMeIn is generating quite a lot of cash -- $147 million worth of free cash flow over the past year. While the stock looks expensive at 40 times FCF, if LogMeIn lives up to its projected growth rate of 39%, the stock could still be pretty fairly priced at today's levels -- and produce MercadoLibre-like returns in the future.