Please ensure Javascript is enabled for purposes of website accessibility
Log In Help Join The Motley Fool
Free Article Join Over 1 Million Premium Members And Get More In-Depth Stock Guidance and Research
By Leo Sun – May 30, 2017 at 1:21PM

The Canadian e-commerce stock could still rally after tripling over the past year.

Shares of Shopify (SHOP 0.67%) have more than tripled over the past 12 months, fueled by the company's robust top line growth, expanding customer base, and narrowing losses. Shopify's cloud-based e-commerce platform enables businesses to quickly design, set up, and run their own online stores.

The bears often warn that Shopify's valuations are getting overheated. Indeed, its price-to-sales ratio of 18 is well above the industry average of 7 for application software makers. However, I believe that this growth stock still has room to run, for a few simple reasons. 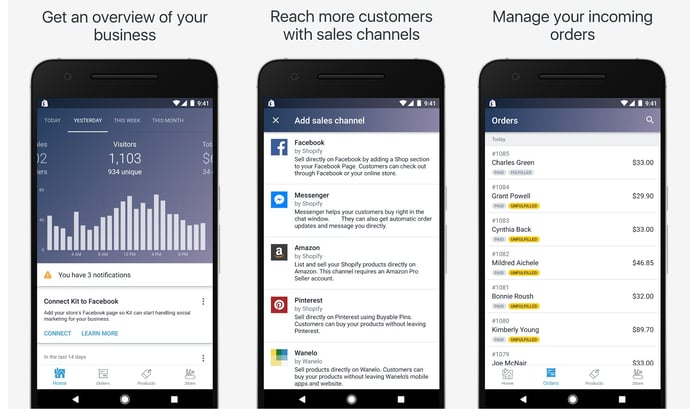 Shopify's revenue rose 90% to $389.3 million in fiscal 2016, and analysts expect 61% growth this year and 40% growth next year. Therefore, Shopify trades at 11 times this year's sales and 8 times next year's sales -- valuations that look slightly more reasonable than its trailing P/S ratio.

Shopify's growth is gauged by three main figures: MRR (monthly recurring revenue), the subscription fees which merchants pay monthly; GMV (gross merchandise volume), the total value of the goods sold by its merchants; and GPV (gross payments volume), the amount of payments processed across its platform.

Last quarter, Shopify's MRR rose 62% annually to $20.7 million. Shopify Plus, its premium platform for bigger companies and brands, accounted for 17% of that total -- up from 11% a year earlier. Its GMV rose 81% to $4.8 billion, with GPV accounting for 38% of the GMV, compared to 37% in the prior year quarter. This growth in payments volume is encouraging, since Shopify generates more revenue from merchants that use Shopify Payments rather than other payment platforms.

Cloud-based companies like Shopify often struggle to turn a profit in their early years due to the high costs of developing new products and securing new clients. However, Shopify's adjusted (non-GAAP) losses have narrowed annually over the past three quarters.

Last quarter, its adjusted loss of $3.5 million represented an improvement from its loss of $5.1 million a year earlier. On a per share basis, its adjusted loss of $0.04 beat expectations by six cents. Shopify has also beat top and bottom line estimates every quarter since its IPO in May 2015. Looking ahead, analysts expect Shopify to remain in the red this year, but possibly achieve non-GAAP profitability by 2018.

In Shopify's start-up days, many industry watchers thought that Amazon (AMZN -3.01%) would render Shopify obsolete with its similar Webstore platform. But in March 2015, shortly before Shopify went public, Amazon announced that it would shut down Webstore. Amazon then signed a series of partnerships with Shopify, which deeply integrated Shopify's features into Amazon's marketplace. That partnership greatly widened Shopify's moat against smaller rivals like BigCommerce and Volusion.

Shopify is frequently mentioned as a likely takeover target, although no concrete bids have emerged yet. Obvious suitors include Amazon, which could integrate Shopify into its marketplace and AWS (Amazon Web Services) businesses, and eBay (EBAY -0.29%), which shuttered its Shopify rival Magenta Go back in 2014.

Shopify's high valuation has likely kept potential bidders at bay, but its market-leading position as an e-commerce middleman, robust growth figures, and clean balance sheet all indicate that it would be a valuable ecosystem asset for bigger tech and e-commerce companies.

Should you buy Shopify today?

Shopify's stock price might stagnate for a while due to its high valuation and recent secondary offering, but I believe that the company's best days are still ahead. As long as businesses need one-stop solutions for their e-commerce needs, Shopify's business will likely continue thriving, and its expanding ecosystem will continue locking in merchants and big e-commerce partners like Amazon.