The credit card giant has never emphasized dividends, but will it change its mind?

Dividend investing has soared in popularity in recent years. Income investors have had to find portfolio income from somewhere, and with interest rates on bonds and other fixed-income investments, dividend stocks have been a logical place to turn. Yet even some of the most important companies in the economy haven't jumped on the dividend bandwagon to a great extent. Credit-card networking leader and Dow component Visa (V 1.16%) is a high-profile company that simply hasn't demonstrated any major commitment to dividends, but some think it's high time for the card giant to make a more considerable move to reward its shareholders. Let's take a closer look at Visa and whether it's likely to accelerate its dividend growth in 2018.

The mixed messages of Visa's dividends

Visa has only been a publicly traded company for less than a decade, and it has never positioned itself as a dividend-paying machine. Shortly after its IPO, Visa established a dividend rate that gave it a yield of less than 1%, and throughout the 2010s, Visa's dividend yield has been stuck in a tight range between 0.5% and 1%. 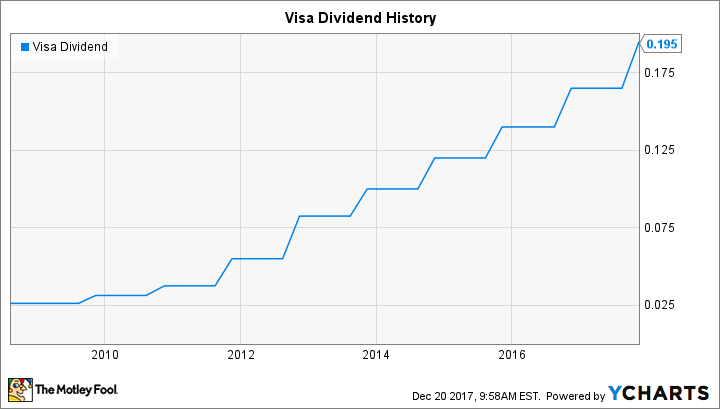 What's odd about Visa's dividend is that the company uses very little of its earnings to make quarterly payments to shareholders. With the exception of occasional short-term hits to its bottom line that have artificially inflated its numbers, Visa's payout ratio has remained in a range between around 15% and 25% throughout the 2010s. That gives the company plenty of capital to use toward raising dividends if it were so inclined.

Visa's strategic vision for its capital puts higher value on alternatives to dividend payments. On one hand, the card giant hasn't hesitated to make important acquisitions when called for. The biggest in recent years was the $23 billion deal to buy Visa Europe, which closed in 2016 and has played a vital role in helping Visa build out a global presence to stand up to its primary competitors in the electronic payment network space. Smaller deals have also been possible because of Visa's plentiful cash flow. 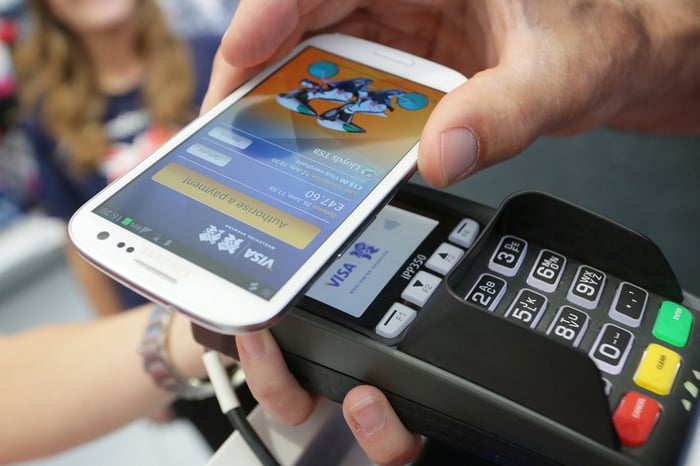 Even in returning capital to shareholders, Visa prefers methods other than dividends. Visa spent more than $7 billion on stock buybacks during 2016, which was actually more than the amount of free cash flow that it brought in throughout the year. The company also reupped its repurchase authorization following that massive spending, authorizing another $5 billion in potential repurchases earlier this year and spending roughly that amount during the first three quarters of 2017. Those figures dwarf the $1.3 billion to $1.6 billion pace of annual dividend spending that Visa has made over the past couple of years.

Will Visa be more generous with its dividends?

Visa's November increase to its payout to $0.195 per share each quarter marked the 10th straight year that Visa has announced a higher dividend, setting the foundation for an impressive-looking long-term track record of dividend growth. Yet the fact that its dividend started from such a low level makes that accomplishment less valuable for shareholders. It would take a more than 50% boost to its quarterly payout to get Visa out of the bottom position among Dow stocks for dividend yield, and the increase that the card giant is likely to make late in 2018 almost certainly won't come close to bridging that gap.