Despite losing nearly $30 billion in branded pharma sales due to the loss of exclusivity for key brands like Celebrex, Lipitor, Lyrica, and Viagra over the course of 2011 to 2020, Pfizer (NYSE:PFE) remains on solid financial footing. In fact, this top pharma stock arguably sports one of the best balance sheets, dividends, and long-term growth prospects within its peer group.

Nevertheless, Pfizer's shares have lagged well behind the scorching biopharmaceutical space since 2011 due to these patent headwinds. Heading into 2018, however, I think Pfizer is now a must-own large-cap pharmaceutical stock for three clear reasons. 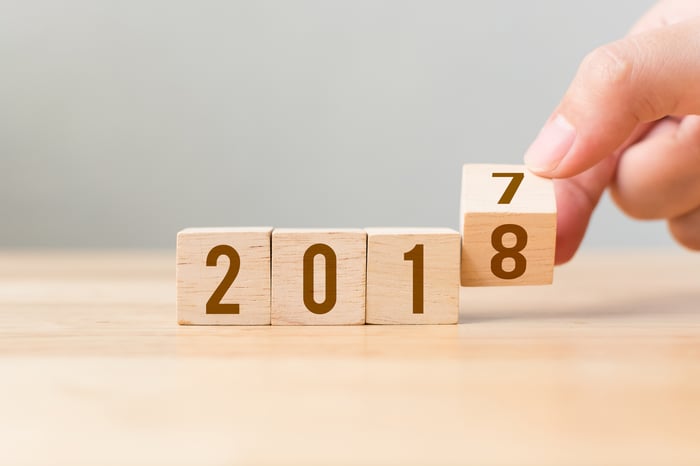 Reason No. 1: Pfizer will be a top beneficiary of U.S. tax reform

In anticipation of the Republican-inspired tax reform legislation, Pfizer already announced that it will increase its dividend by 6.3% and pour another $10 billion in its share buyback program next year. As a result, Pfizer offers a forward-looking yield of a noteworthy 3.66%, and it now has an astounding $16.4 billion to apply to share repurchases moving forward.

After this latest move, this pharma titan now has one of the most generous shareholder rewards programs in the entire healthcare sector, thanks to its newfound financial flexibility under the Republican tax bill. Most importantly, though, the revised corporate tax rate that's a key component of the Republican bill should also free up additional cash (purely on an accounting basis) for more dividend increases and share buybacks in the future.

With Pfizer's top-selling nerve-pain medication, Lyrica, closing in on its last days of exclusivity, investors are right to be worried about the drugmaker's near-term growth prospects. Lyrica has historically made up a hefty 7% to 10% of the company's total quarterly sales.

However, Pfizer has prepared itself well for this event by going on an acquisition spree, signing key licensing deals, and aggressively advancing its most lucrative clinical assets. Pfizer is thus on track to emerge from the shadows of the patent cliff, for the most part, by 2022.

Turning to the details, Pfizer's strategic efforts have led to the Food and Drug Administration approval of the next-generation type 2 diabetes medicine Steglujan (co-developed and co-commercialized with Merck), the approval of the PD-L1 anti-cancer drug Bavencio for two indications so far (co-developed with Merck KGaA), the steady progress of the TKI inhibitor lorlatinib in multiple cancer trials, and, of course, the roll out of the game-changing breast cancer drug Ibrance. And that's only a small sampling of the drugmaker's impressive clinical and regulatory successes of late.

Reason No. 3: More divestitures and acquisitions are coming

During its third-quarter conference call, Pfizer announced that it was exploring the sale of its consumer healthcare business, which immediately drew significant interest from GlaxoSmithKline (NYSE:GSK). Although a deal has yet to be consummated between Pfizer and Glaxo, it makes sense for both companies.

Pfizer is attempting to move away from lower-margin products to focus more intently on its thriving innovative products business. Glaxo, for its part, is looking to increase its economy of scale in consumer healthcare as part of a broader growth strategy that relies less on high-value pharma products.

Why is this potential divestiture important to Pfizer's shareholders? I think the key takeaway is that Pfizer's brass is clearly cooking up a way to shave off less profitable parts of the company in a bid to eventually make a major acquisition in the pharma space.

Specifically, I think such a move will turn out to be a prelude to the acquisition of Bristol-Myers Squibb (NYSE:BMY). Bristol would give Pfizer a true star in the field of immuno-oncology with Opdivo, and it would consolidate the duo's red-hot blood thinner franchise that centers around Eliquis. This acquisition would also be immediately accretive from a top-line standpoint.

I think 2018 is going to be a transformational year for Pfizer. With the U.S. tax legislation a done deal, its management can now finally move forward on reshaping the business into the supercharged growth engine that they envisioned several years ago.

On this front, I fully expect the company to at least explore a bid for Bristol after divesting its consumer healthcare business to Glaxo early in the new year. And the best part perhaps is that Pfizer probably won't have to touch its top-notch shareholder rewards program to do so. Its cohort of new growth products, and immense stockpile of cash, should be enough for Pfizer to safely advance on multiple fronts at once.