Investors have enjoyed a great 2017, with major indexes like the S&P 500 and Dow Jones Industrials having soared to new heights throughout the year. Yet some stocks haven't been able to participate in the historic rally that the stock market has enjoyed. Among the worst performers have been Southwestern Energy (NYSE:SWN), Rite Aid (NYSE:RAD), and AMC Entertainment Holdings (NYSE:AMC). All of them have declined at least 50% during the year, and investors want to know whether they're going to regain lost ground in 2018, or simply keep dropping. 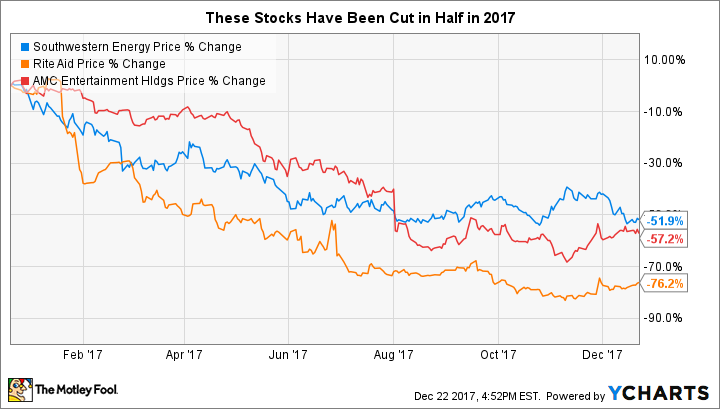 Southwestern Energy has had a terrible few years, plunging by nearly three-quarters in 2015 and seeing its 2016 rebound dry up quickly this year. The year got off to a poor start when the natural gas producer revealed weak production figures in its February financial report, stemming from its strategic decision to limit drilling due to high debt levels and low natural gas prices. Subsequently, market weakness continued throughout 2017, declining from about $3.50 per million BTUs (British Thermal Unit) near the start of the year to its current level around $2.60.

Bullish investors hope that the rise of exports of liquefied natural gas in the coming years could prompt some equalization in global natural gas prices, which would have an upward impact on U.S. markets. Unless that happens, it'll be hard for Southwestern Energy and its gas-focused portfolio of energy-producing assets to make much headway, and recent profits are in danger of reverting back to losses without something to push the natural gas market higher. 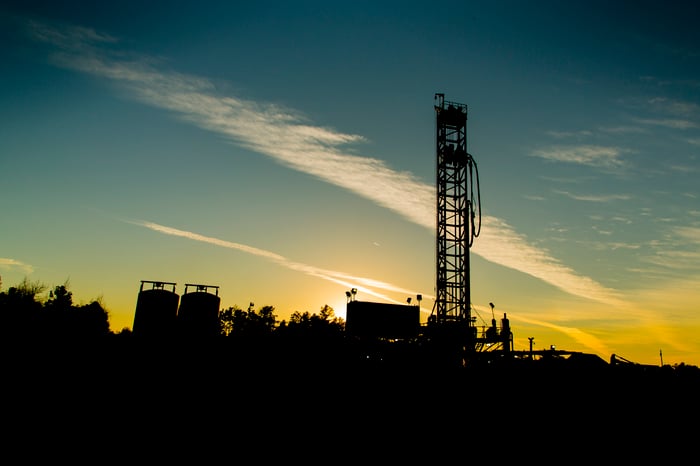 Rite Aid has also dealt with plenty of difficulty during 2017. The drugstore chain had to deal with disappointment on multiple occasions during the year, as its proposed merger with Walgreens Boots Alliance (NASDAQ:WBA) suffered multiple delays and price changes before finally falling apart entirely. In the end, Rite Aid had to settle for a sizable sale, sending 1,900 store locations to Walgreens in exchange for about $4.4 billion in cash. Although that money will be useful in helping Rite Aid pay down debt, it still leaves open the strategic question of what the drugstore company should do next.

Looking ahead, Rite Aid still faces the difficulties of poor traffic and declines in generic drug prices. It will also take capital expenditures to update its remaining stores to keep up with the moves that competing chains are making. With interest rates on the rise, Rite Aid will need to work quickly to restructure and contain its debt exposure in order to avoid a nasty downward spiral on its balance sheet.

AMC looks for an answer

AMC Entertainment Holdings faces the challenge of being a leader in an industry under siege. Its legacy movie-theater properties have suffered from poor box-office receipts during 2017, and in the long run, it has had to deal with a secular shift toward home entertainment through streaming video and other competing services. High debt levels have put pressure on AMC, in particular, to find a solution that can resurrect its business and restore growth opportunities.

In response, AMC has considered several solutions. To raise money, the theater company could consider doing a spinoff of its European assets, which might command higher valuations than they would as part of the U.S.-based company. Yet even though some help from big-ticket blockbusters might bring short-term relief, competing solutions like MoviePass could end up undercutting AMC's efforts. Costly upgrades to theaters might bring in novelty viewers, but they won't guarantee a happy ending for AMC shareholders.

Just because stocks have fallen doesn't mean that they're going to go up anytime soon. Among these three stocks, Southwestern Energy has the best chance of recovering, mostly because natural gas is a cyclical commodity. For Rite Aid and AMC, more dramatic measures will be needed to bring success.