There's one big question on Under Armour (NYSE:UA) (NYSE:UAA)investors' minds these days: Has the stock hit bottom yet?

There's no question that 2017 has been a terrible year for the sportswear-maker. Shares are down 46% after the company slashed its guidance several times. Under Armour has struggled with a series of challenges, including bankruptcies at Sports Authority and slowing sales growth at other partners, unpopular comments from CEO Kevin Plank praising Donald Trump, and a misfire with the launch of the Curry 3 a year ago. Under Armour has also lost market share to Adidas (OTC:ADDYY), which has ridden a trend in vintage sneakers, and Under Armour's own efforts to transition to a fashion brand have mostly fallen flat. Its bet on connected fitness has similarly disappointed.

Even so, Under Armour just had its best month in nearly two years. Shares have jumped 19% thanks mostly to an analyst upgrade from Stifel to "buy". Analyst Jim Duffy said that he expected the apparel and footwear market to stabilize next year, and for price competition among Under Armour, Adidas, and Nike (NYSE:NKE) to moderate. He also sees Under Armour's cost structure improving.

While investors were happy to get an optimistic forecast, there are several reasons that the stock remains a risky bet.

In September 2015, with the stock at an all-time high, CEO Plank set a bold goal at the company's investor conference. He said that revenue would more than double from $3.1 billion in 2014 to $7.5 billion by 2018, representing compound annual growth of 25%. The company also saw operating income jumping from $354 million in 2014 to $800 million in 2018. However, the following year Under Armour stepped back from those targets, and it's now clear that the company will fall woefully short of those goals. Analysts expect 2018 revenue of just $5.15 billion after 2% growth this year and a 4.5% increase in 2018. Operating income, meanwhile, has fallen to just $228 million over the last four quarters, and analysts expect earnings per of share of only $0.22 next year, up from $0.19 this year. Despite the Stifel upgrade, it's clear Wall Street isn't expecting a quick comeback.

That wasn't the only time the company scaled back its guidance, however. Management has also cut expectations several times this year. In the third quarter report, the company said that full-year revenue would grow in just the low single digits for the quarter, blaming lower North American demand and operational challenges, and that adjusted operating income would reach $140-$150 million.

In addition to simply weighing on the value of the stock, the problem with consistent guidance cuts is that they show that management is out of touch with the market and is unable to either accurately forecast demand, execute its own operations effectively, or both, which seems to be the case today. While Plank, who founded the company, deserves credit for building a multi-billion dollar brand, the company is facing a challenge unlike any it's had in its history.

The pullback in Under Armour shares may signal to some investors that the stock is now cheap, but that simply isn't true: profits have tumbled along with the share price over the last two years. 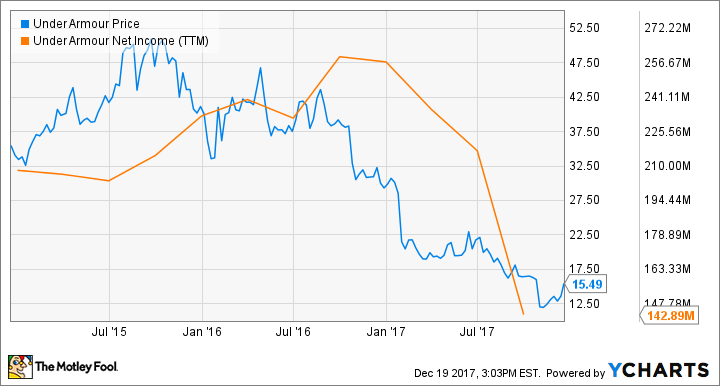 Over the last month, investors have bid Under Armour stock up as if they're confident that the company is just experiencing temporary headwinds and they expect it to surge past next year's estimates. I wouldn't be so sure about that. Retail is undergoing a huge transformation as e-commerce and the direct-to-consumer channel become more important and traditional retail partners fade. Nike has shown it understands this, with an ambitious plan to redefine its brand outlined at its recent investor conference. However, Under Armour has mostly misread this shift, and it's suffered the consequences. Revenue is falling by double digits in North America, which may be an indicator of more problems than just the retail shuffle. Its brand may simply be out of fashion in the U.S., which is concerning as that's its biggest market.

Under Armour could still eventually bounce back, but the stock remains a risky bet, especially compared to its peers. With a lofty valuation, recurring guidance cuts, flat revenue growth, and falling profits, Under Armour's turnaround is by no means guaranteed. Shares could easily fall further.