Shares of the streaming leader jumped again this year. Here's why Netflix continued to outpace the market.

The company continued to execute on its goals of building its subscriber base, especially internationally, where it completed its expansion in January 2016; driving profitability with a price hike; and creating better original programming that's able to win critical acclaim and awards.

Netflix is also set to have its best year ever in terms of subscriber growth and profits, as the streaming leader is on pace to add nearly 22 million subscribers and produce earnings of $1.25 per share, evidence that profit margins are ramping up as the company focuses on profitability and matures.

Let's take a look back at the year that was for Netflix and examine a few of the things that went right for the streaming champion. 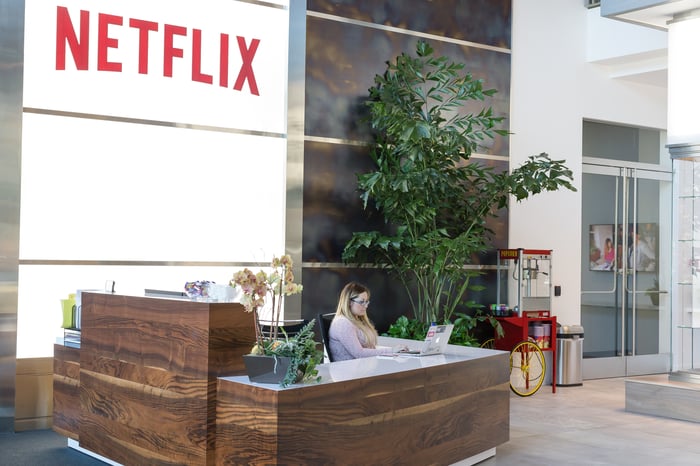 Unlike most companies, Netflix issues detailed forecasts for the current quarter in each of its earnings reports, complete with data on subscriber growth, contribution margins, and streaming content obligation, in addition to standard information like revenue and profits.  That gives investors a good sense of how the company is performing according to its own expectations -- and Netflix beat its own guidance almost every time this year.

In its fourth-quarter earnings report that came out in January, for example, the company added 7.05 million members, a new quarterly record, much better than the 5.2 million the company had projected and the 5.59 million it added the year before. Subscriber growth exceeded estimates both domestically and internationally, and revenue and contribution margins were better than expected due to the strong subscriber growth. The stock rose as a result.

In its first-quarter report in April, subscriber additions came in slightly below 5.2 million at 4.95 million, but otherwise the report matched expectations. However, the company turned in blowout numbers in its July report, with a record for subscriber additions in the seasonally weak second quarter: 5.2 million, compared to projections of just 3.2 million, which management credited to a "strong slate of content," evidence that the company's performance is incresaingly tied to the appeal of its original programming. Management also said it expects to deliver a full-year positive contribution profit in the international segment for the first time ever. Shares surged nearly 14% on the news.

Finally, Netflix again beat its own forecast in October when it added 5.3 million subscribers against a forecast of 4.4 million. After a string of results like that, which led to revenue growing 30.3% and earnings per share doubling, it's easy to see why Netflix stock has surged this year.

The news comes just a year after the company "un-grandfathered" customers, lifting prices on long-term users from $7.99/month to $9.99/month. Despite the price hike, subscriber count continued to grow steadily. The company and Wall Street seem to think that Netflix has considerable room to raise prices, especially as it spends more on content, which is how it justified the move. Prices began going up in November, and that should help Netflix drive profitability and grow revenue by at least 30% again next year.

Netflix had its best haul in Emmy nominations this year, scoring 91 nods, up from 54 in 2016 and approaching HBO's lead at 111. Shows like "House of Cards," "Stranger Things," and "The Crown," earned applause from the television academy, a sign that the billions Netflix spent on original shows and movies are paying off. Rival Hulu stole the limelight at the awards show as "The Handmaid's Tale" won Best Drama, though "Stranger Things" brought home five awards and Netflix's documentary "13th" scored four trophies.

Original content will become more important as traditional media companies invest in their own streaming services and pull programming off of Netflix. 21st Century Fox's (FOXA) FX, for example, has taken off several popular shows including "Louie," "It's Always Sunny in Philadelphia," and "The League," and Disney (DIS 1.84%) is set to take its movie catalog off of Netflix by 2019.

In fact, Netflix's rise likely helped push the recent Disney-Fox merger, as traditional media companies have struggled with the evolution of streaming. Not surprisingly, Netflix shares fell the day rumors of a deal first broke.

If that merger goes through, 2018 could present more challenges for Netflix, as tech companies like Apple and Facebook are also eyeing the video streaming space. However, while I wouldn't expect another 50% jump in Netflix stock next year, the company looks primed for another solid year of subscriber growth and rising profits as it lifts prices and builds on 2017's momentum.