Just when it seemed headed for a breakout year following its 2016 purchase of Virgin America, Alaska Air Group (NYSE:ALK) has experienced an unexpectedly rough 2017, and its share price has reacted in kind, declining over 16% year to date. Not all of this fortune reversal should be attributed directly to the carrier, as industry headwinds arose which challenged both Alaska and its close competitors. To gauge what 2018 might bring for the Seattle-based airline, let's revisit specific performance issues, as well as the industry trends that shaped the current year.

Practical difficulty and cost creep within the integration of Virgin America, which the company purchased a year ago this month, has proved Alaska's most vexing problem by far in 2017. As I discussed in a recent article on Alaska's current state, combining the two airlines has proved a more onerous task than expected, consuming a great amount of management's attention, and compressing operating margin perhaps more than investors had expected.

The task of pulling together two disparate airlines opened vulnerability to new problems during the year. As it struggled to contain costs while meeting integration timelines, the airline fell off track managing subsidiary Horizon Air during the second half of 2017. 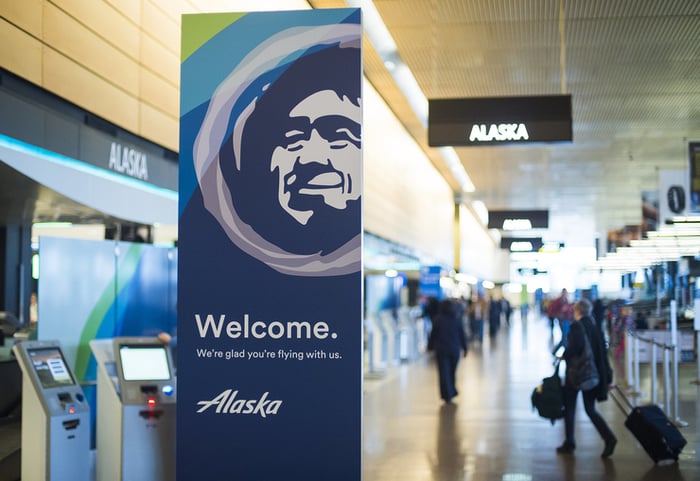 Bringing pilot wages up to par was also a focus of consolidated operations in 2017. The company received a decision in its third-party pilot wage arbitration at the end of October and has agreed to a package that increases top-of-scale Alaska Airlines pilots' wages by 16%, and top-of-scale Virgin America pilots' wages by 33%. Management reports that the net impact of this arbitration award will reach $160 million to $165 million annually, which is a bit larger than its pre-award arbitration offer of $140 million.

The pilot wage increase has pushed up cost per available seat mile, ex-fuel, by $20 million for the remainder of the year, from a previous range of 8.35 to 8.40 cents, to a new range of 8.50 to 8.55 cents. More broadly speaking, the long-term impact of the arbitration will produce a drag on the company's operating margin of roughly 1.75 percentage points.

Industry pressures and a glimpse into 2018

Other factors that will challenge performance in 2018 aren't native to Alaska Air Group. Rising fuel costs are a common hurdle for carriers of all sizes. In 2017, Alaska's economic fuel cost (the "all in" price including refining and hedging costs) rose more than 20% to $2 per gallon -- a steep but manageable trend.

Another industry factor, price competition among major carriers, was set into motion when United Airlines (NASDAQ:UAL) inexplicably decided to grab market share from ultra-low-cost carrier Spirit Airlines (NYSE:SAVE) this year. This appears set to continue at least through the first few months of 2018. With a high fixed-cost structure, network and regional carriers have nothing to gain from escalating fare aggression. But Alaska has typically exhibited disciplined revenue management during such periods.

From a view at cruising altitude, none of the industry pressures or internal issues will keep Alaska from regaining its poise and beginning to improve profitability next year. The company expects that the operational integration of Virgin America will be substantially complete by mid-year 2018. From that point, investors can expect that Alaska will be able to exert tighter cost control to bring operating margin back over the 20% line. Because of the internal and external reasons we've discussed, operating margin has hovered above 18% so far this year, after clearing 25% over the first nine months of 2016.

As for revenue, a flurry of new route openings in 2017, and a more aggressive presence in California, will eventually translate into top-line momentum. Alaska has continued to expand capacity near its historic rates. As of its most recent investor update, capacity for full year 2017 (as measured in available seat miles) is expected to hit approximately 7% growth, right in line with a 20-year average.

Finally, the carrier is steadily chipping away at the $2.1 billion in debt incurred to purchase Virgin America. Through nine months of 2017, Alaska Air Group has reduced total long-term debt by $263 million, to $2.7 billion. Net debt, the difference between total debt and the sum of cash and marketable securities on hand, now stands at $961 million. Given Alaska's traditionally strong operating cash flow, it's quite possible that the airline can return to its favored zero net-debt position within two years.

In sum, during 2017, higher merger costs than anticipated, operational hurdles, and industry headwinds combined to throw Alaska Air Group off balance. But long-term shareholders should feel quite comfortable maintaining the carrier's stock in their portfolios. And given a forward price-to-earnings ratio that has drifted down to 11.0, in line with larger, slower-growth peers such as Delta Airlines and American Airlines, Alaska's valuation should tempt those contemplating a new position in its shares.