Wall Street is getting optimistic about Twitter (NYSE:TWTR) heading into the new year. Recent analyst upgrades pushed the stock to a new 52-week high, and its 50% price gain in 2017 isn't far from Facebook's (NASDAQ:FB) year-to-date return.

Twitter is posting far weaker operating trends than Facebook, including around key metrics such as audience growth, user engagement, and monetization. But while it's likely to continue struggling in these comparisons with the social media giant, the microblogging platform should make important progress on these points in 2018. Here are some of the best reasons to be bullish on Twitter's business right now.

The biggest knock on Twitter has always been that its platform isn't large or sticky enough to generate impressive profits. After all, while individual tweets frequently contribute to -- and sometimes drive -- the public conversation around areas like politics, sports, and breaking news, there is limited appeal in the app for most potential users. That fact helps explain why Twitter counts just 330 million active monthly users, compared to Facebook's 2 billion.

The platform has a famously hard time keeping ahold of its fans, too. Whether it's because of usability issues or harassment challenges, a large portion of Twitter's base leaves the service in any given year.

That's why investors are understandably excited about the recent uptick in engagement and audience metrics. Growth in Twitter's highly active daily users sped up to a 14% pace in the third quarter from 12% in the prior quarter. That positive momentum could accelerate as it rolls out its 280-character limit change. Early results of the change showed an immediate spike in the engagement metrics that the company needs to improve if it's going to build a network that someday rivals Facebook in its audience reach.

It's about the data

Twitter's advertising trends should improve as its engagement and audience figures growth. For now, though, the company is struggling mightily on this score. Ad revenue declined in each of the last three quarters while Facebook's comparable figure soared 49% in 2017, from an already huge base. 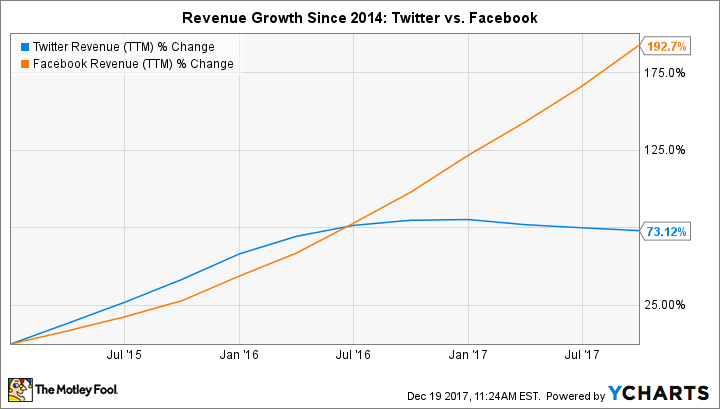 Like Facebook, Twitter is convinced that video represents a major opportunity to improve monetization trends. Executives inked dozens of content partnership deals last quarter, and their hope is that the medium will raise the return on investment that advertisers see in the platform, leading to increased demand and higher prices.

It's unclear whether that initiative will work, but the good news is that Twitter won't need to rely as much on its advertising business -- assuming its data licensing segment keeps posting such strong results. After starting off as an insignificant revenue stream, that division recently past $300 million in annual revenue. The data segment was up 22% last quarter and now accounts for 15% of Twitter's sales base. It's a safe bet that this division expands to an even greater portion of the business in 2018.

Twitter achieved a few encouraging financial milestones in its last quarterly report of 2017, including booking its first-ever quarter of positive operating income. And thanks to declining costs, adjusted profit margin was $207 million, or 35% of sales, which far outpaced management's forecast of between $130 million and $140 million.

These wins put the company in position to have its best profit year yet in 2018. For the stock to justify its recent rally, though, Twitter will likely need to pair that good financial news with solid gains in its core audience and engagement metrics.