There's a lot of upheaval taking place in the energy industry, making it a treacherous place for investors. Stocks that were once great value dividends, like ExxonMobil (NYSE:XOM), are being forced to take out debt to keep dividend payments where they are. Even utilities are being altered by electric vehicles and alternative energy.

With all of this disruption in mind, I think investors should avoid risky stocks like Tesla (NASDAQ:TSLA) and ExxonMobil and look at steady energy stocks like NextEra Energy Partners (NYSE:NEP) instead.

There's no question Tesla, which is planning to ship 100,000 vehicles this year before ramping to 500,000 or more in coming years, has led the EV revolution. Investors have rewarded the company with a market cap of $55 billion and nearly unlimited funding. But it's burning cash like crazy, and competitors are coming for its position as an EV leader. 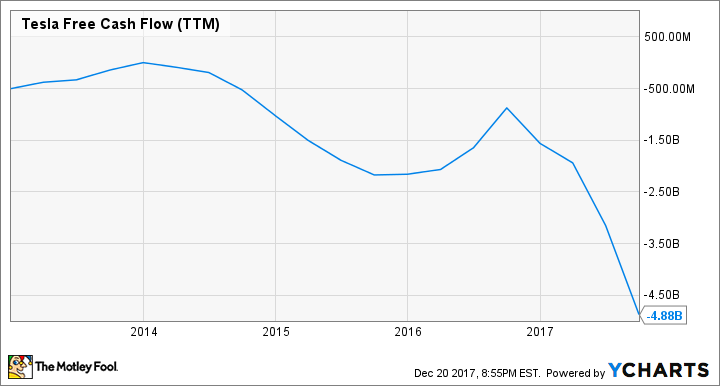 The Model 3 may have gotten most of the attention in 2017, but General Motors (NYSE:GM) was the first to launch an affordable EV with long range in the Chevy Bolt and will sell nearly as many Bolts as Tesla sells Model Ss in the U.S. this year. Next year, BMW, VW, GM, and more will launch more EVs and launch competition for Tesla.

Tesla hasn't proven that it can profitably build and sell EVs on a mass scale, and that's what should concern investors. And with so many competitors eyeing its business, this is a stock I would avoid in 2018.

Another company that carries more risk than it seems is ExxonMobil. Of course, there's the threat of EVs eating away at oil demand, and that's a reason I would avoid the stock over the long term. But take a look at the chart below to show how poorly the company is performing even under favorable demand conditions. 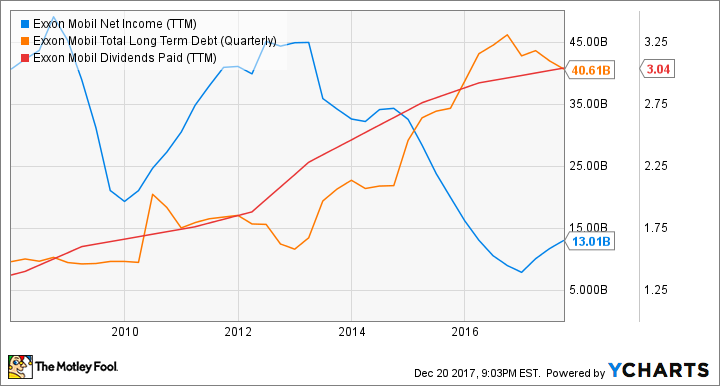 You can see that over the last decade net income has plunged, debt has soared, and the dividend payout has been higher than what the company earns from operations for most of the past year. Layer on top of that the threat coming from EVs and ExxonMobil is a company with a very murky future.

Investors looking for some stability in energy should look no further than renewable energy yieldcos. The company owns 3.7 GW of wind and solar assets with an average contract life of 18 years remaining, ensuring high-quality cash flow to pay dividends for nearly a decade.

The current dividend yield of 3.7% for NextEra Energy Partners isn't all that impressive, but it has visibility to growing the dividend by 12% to 15% for at least the next five years through a combination of dropdowns from NextEra Energy or the acquisition of third-party projects. The low dividend could even allow for purchases using the stock as a source of funding, assuming the rate of return for projects would exceed the cost of the dividend.

Given the upheaval taking place in other parts of the energy industry, a 3.7% dividend yield with growth that's backed by long-term contracted cash flows is a great buy for investors.

As a top pick, I've made a thumbs-up call on NextEra Energy Partners on my CAPS page, betting the stock will beat the market. It's one of the few energy stocks I would put my money on today.