Please ensure Javascript is enabled for purposes of website accessibility
Log In Help Join The Motley Fool
Free Article Join Over 1 Million Premium Members And Get More In-Depth Stock Guidance and Research
By Daniel B. Kline - Dec 26, 2017 at 7:30AM

The gift-giving season leaves a lot of people receiving things they don't want.

Any person who regularly gets holiday gifts has experienced the shock of opening a present to find something so terrible, it's hard to not betray our dislike of the gift to whoever gave it to us. Maybe it's an ugly sweater, a pair of pants you would never consider wearing, or something else truly horrifying.

No matter the gift, in most cases, a bad present can be returned. That's good for consumers, but it creates a problem for stores.

Returns are not a small problem. The National Retail Federation (NRF) estimates that 13% of all purchases made will be returned. That creates a glut of merchandise that stores can't simply put back on their shelves.

Instead, they're increasingly turning to liquidation marketplaces. These services are private, online auctions that help major retailers, including Amazon.com (AMZN -2.49%), Wal-Mart (WMT -0.28%), and Costco maximize their returns on, well, returns. 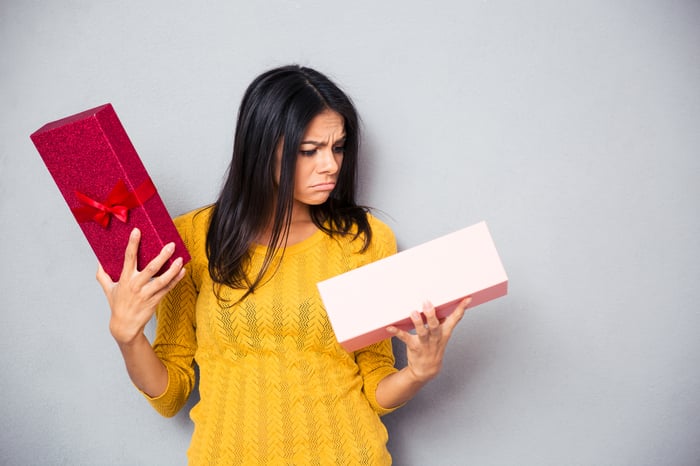 Not every gift is one you want. Image source: Getty Images.

Retailers had traditionally used a pool of three to five liquidation companies that bid on their returns. Now, the emergence of these online markets opens that up to a lot more players allowing companies to sell their returned merchandise to for 30%-80% more than that they would have received under the old system, eMarketer reported.

"The huge amounts of returns are becoming expensive aspects of retailers' propositions," Howard Rosenberg, CEO and co-founder of B-Stock Solutions, told the website. "There's a lot of expenses that go into setting up a refurbishing operation. Now that they are getting higher [liquidation] prices, it becomes a lot more attractive."

Rosenberg's company operates online liquidation marketplaces for the three chains mentioned. In general, buyers are bidding on merchandise by the pallet or even the truckload. For example. on the Wal-Mart liquidation site, which is visible to the public but requires approval to become a buyer, one customer bid $2,350 to beat 23 others for a truckload of furniture. That's quite a deal, as the original value of the load was $16,415.

It's a digital problem

While technology like Amazon's Echo Look may eventually cut down on returns, the increase of digital shopping is likely to push them higher in the short term. That's logical, given that consumers are buying an increasing amount of merchandise sight unseen.

That creates opportunities for returns that would not have happened in a store. A piece of clothing you buy may not fit, or the color may be different than it appears online. An electronics item might not work right or whatever you bought might get returned because the online, or mobile, site you saw it on simply did a bad job showing you what you were purchasing.

What's next for retail?

Stores can't do much to stop your friends and family from buying terrible, ill-fitting gifts that you don't want. That means the holiday season will remain a time with a lot of returns, even if technology eventually cuts down the number that comes from things people buy for themselves.