Cheniere Energy, Inc. (NYSEMKT:LNG) owns or controls a collection of liquefied natural gas (LNG) assets meant to serve energy industry export markets. The company is still building out its business, which is a costly endeavor. In fact, investors should continue to expect red ink on the bottom line for a while. But Cheniere Energy still managed to crush it in 2017, turning an important corner on the top line.

It's ugly down here

Cheniere Energy has lost money every single year for 10 consecutive years. That's not going to change in 2017, and probably not for a while thereafter. All that red ink is the result of the company's efforts to build liquefied natural gas export facilities. Its main hub is its Sabine Pass facility, which sits at the border of Texas and Louisiana. Building a new LNG export facility from the ground up is an expensive and time-consuming process. In fact, Sabine Pass was originally conceived as an import hub, meaning that Cheniere Energy has made some notable shifts as it's progressed through this project. So you can understand the losses at Cheniere Energy. At this point, however, Sabine Pass has four LNG processing facilities, called trains, up and running. It expects to open a fifth train in 2019. So there's still construction taking place, but the vast majority of this facility is operational right now (more on this in a second).

This isn't the only LNG terminal that Cheniere Energy is building, though. It also has a facility in Corpus Christi Texas on which it's working. This hub should start exporting liquefied natural gas from its first train sometime in 2019. A second train should be up and running shortly thereafter, with current plans calling for a late 2019 to mid-2020 completion date. 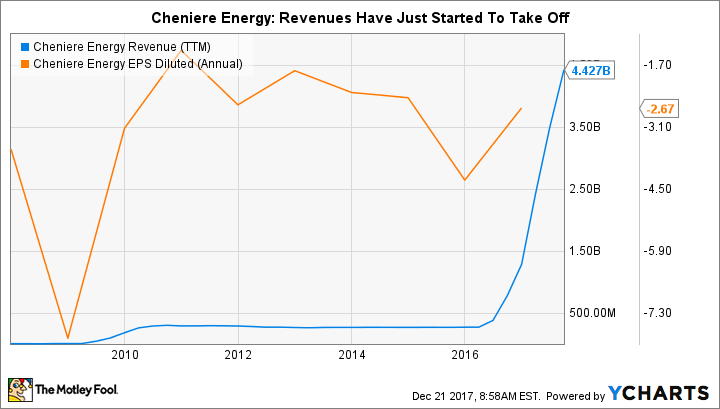 The upshot is that Cheniere Energy's efforts are only just starting to bear fruit. And the spending it needs to make to complete its growth projects will continue to be a weight on the bottom line. This is why earnings results don't show you how Cheniere Energy crushed it in 2017.

It's a top-line thing

Revenue, however, paints a very different picture, and shows exactly how incredible a year 2017 turned out to be. It was, to put it mildly, an important turning point. For example, through the first nine months of 2016, Cheniere generated roughly $1.3 billion in revenue. Year to date through the third quarter of 2017, however, it posted revenue of $3.9 billion. I think tripling revenue counts as crushing it.

That's basically the result of the Sabine Pass facility starting to hit its stride, operationally speaking. The really exciting piece of the story, however, isn't simply the revenue number. It's the fact that the massive top-line increase shows that Cheniere's growth efforts are actually working, and it provides a compelling picture of the future, when capital spending starts to wind down. 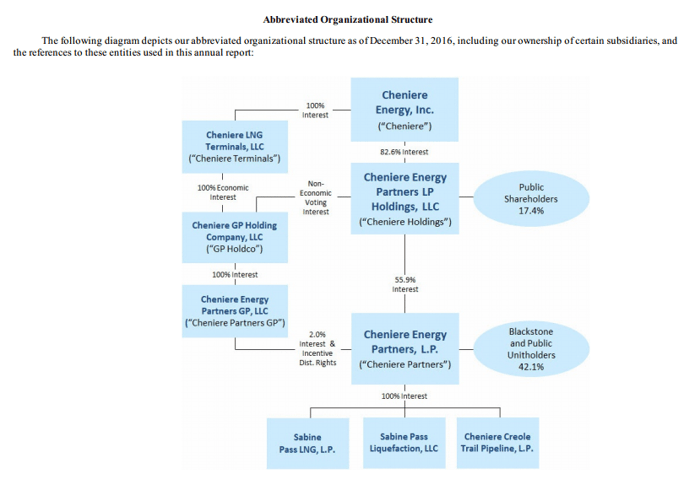 The best part is that the facilities it's building are backed by long-term, fee-based contracts. So once construction is finally done, the company's cash flow will likely be material and very stable. If the success of 2017 is any indication, the future looks bright at Cheniere Energy.