The major cryptocurrencies are down across the board, with one exception.

In a relatively calm day for cryptocurrencies, most of the largest are down by a few percentage points. Bitcoin, Ethereum, bitcoin cash, and Litecoin are all down, but banking-oriented cryptocurrency Ripple is up by double digits, catapulting it into the No. 3 spot in terms of market capitalization.

What caused the negative moves among the others? It's possibly due to comments made by a widely followed cryptocurrency analyst who sees a volatile year for bitcoin in 2018, and not necessarily to the upside. 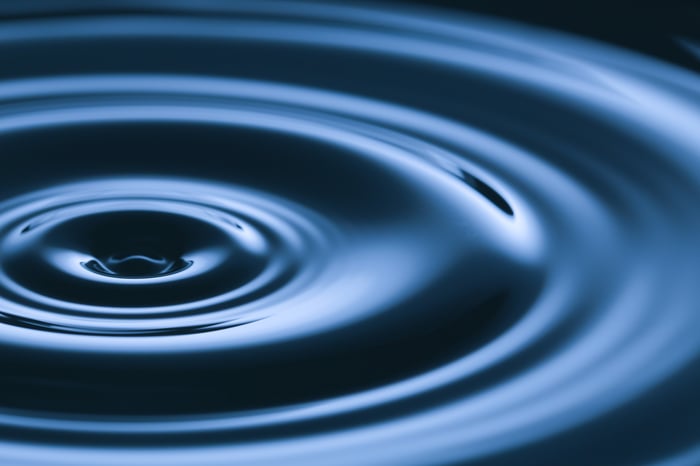 Data source: www.investing.com. Prices and daily changes as of 3 p.m. EST on December 27, 2017. Prices are rounded to the nearest $0.01, where appropriate.

As you can see, Ripple is the sole gainer among the five largest cryptocurrencies, with the rest firmly in the red.

Ripple is the third-largest cryptocurrency (for now)

If you follow our cryptocurrency coverage, you may notice that the order of the top five has changed since yesterday. The price of Ripple has surged over the past 1 1/2 days, and the digital currency's market cap is now $52.7 billion, which puts it well ahead of bitcoin cash, which has a collective value of $48.3 billion.

In fact, Ripple rose to as high as $1.30 on Wednesday before giving up some of its gains after news that SBI Holidngs and subsidiary SBI Ripple Asia would establish a "consortium" with several Japanese credit card companies, utilizing blockchain technology. While it remains unclear how Ripple will be involved and to what extent, it was enough to spark investor interest in the cryptocurrency.

If you're not familiar, Ripple is technically the name of a company, not the currency, which is known as XRP. The company, a Silicon Valley start-up, aims to use blockchain technology to develop a payment network for financial institutions, and has formed partnerships with companies like American Express.

While nobody knows for sure what bitcoin will do in 2018, one analyst doesn't see the volatility dying down anytime soon. Nick Colas, an analyst from DataTrek Research, sees bitcoin trading in a range of $6,500 to $22,000 next year, saying that a valuation case can be made for either extreme.

In addition, Colas sees a volatile environment, with bitcoin losing market share to other competitors, such as the other four listed in the chart. (Note: Check out yesterday's edition for some of the reasons why the others may be more appealing to some people.) He also sees "at least four crashes," which he defines as a drop of 40% or more in the leading digital currency.

Finally, Colas added that the only way that bitcoin will get much higher than the $22,000 maximum of his range is if a large-scale business starts using bitcoin. Colas' valuation considers bitcoin's primary practical use as a store of value, like gold, or $100 bills, not necessarily as a form of payment. If the latter were to become the case, bitcoin could be worth much more.

Why Jackson Financial Stock Took Off on Wednesday