Did you get anything nice for the holidays? Shareholders of Pfizer (NYSE:PFE), Wabash National (NYSE:WNC), and Roper Technologies (NYSE:ROP) certainly did, as all three companies lifted their dividends in the days leading up to Christmas.

How large or small were these freshly delivered corporate gifts? Let's find out. 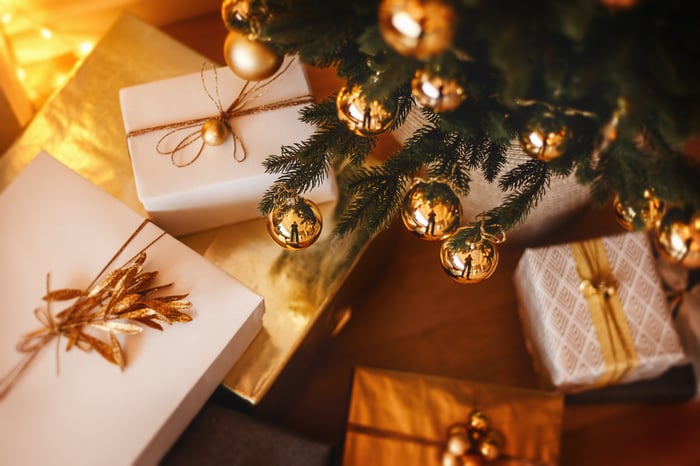 Monster pharmaceutical company Pfizer's present to shareholders was a 6% hike in its quarterly payout to $0.34 per share. The company has also launched a new $10 billion share repurchase program.

The 2010s have been a decade of challenges for Pfizer, which has lost (or will lose) patent exclusivity on more blockbuster drugs than most pharmaceuticals produce in a lifetime. Pfizer hasn't been able to fully replace the billions of dollars in revenue it's lost from these expirations. Nevertheless, it's doing a pretty good job of shoring up its portfolio and pipeline through in-house development and acquisitions. 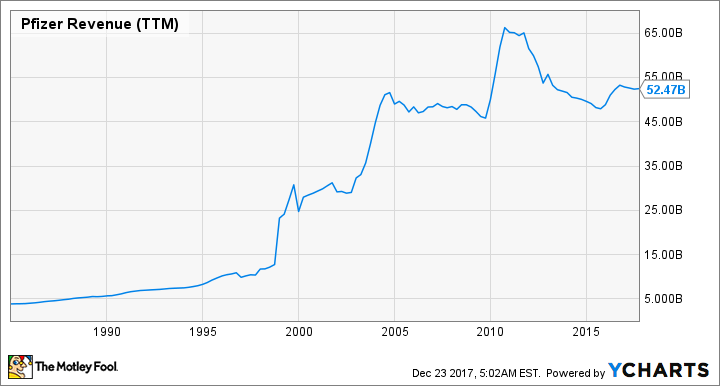 This has helped Pfizer halt the revenue slide; the company's top line inched up slightly on a year-over-year basis in its Q3 (to $13.17 billion), while adjusted net income rose by 8% to just over $4 billion.

Consequently, its operating cash flow and free cash flow have both been on the rise lately. They're sufficient to cover both dividends and share buybacks, and I'd imagine this will continue on the back of further growth.

Pfizer's new dividend will be dispensed on March 1 to investors of record as of Feb. 2. Its payout ratio is 51%, while it would yield 3.8% at the most recent closing share price. That compares very favorably to the 1.8% average of dividend-paying stocks on the S&P 500.

The $10 billion stock buyback initiative is in addition to an existing program, which has $6.4 billion remaining under authorization. The company didn't provide an end date for the new program.

Wabash National, a major manufacturer of truck trailers and related goods, is raising its quarterly dividend for the first time since initiating it just over one year ago. The company's upcoming distribution will be 25% higher, at nearly $0.08 per share.

In contrast to the dividend's trajectory, Wabash has posted declines in key fundamentals recently. In its Q3, the company's net sales slipped by 8% to $425 million, while its adjusted net income fell by 36% (to $21 million).

The culprit was a drop in shipments attributed to factors such as the natural disasters that occurred during the quarter and the company's outlay on recent acquisition of Supreme Industries. Also, 2016 was a very strong year, so many 2017 figures look weak by comparison.

Going forward, Wabash anticipates increased demand thanks to a continually improving economy and a rising order backlog. It's lifted the guidance for its fiscal 2017 shipments and profitability. It also anticipates at least 13% growth in per-share earnings the following year.

If that growth is achieved, Wabash should have enough cash in the safe for the new payout. As you can see below, its free cash flow has so far been sufficient to cover both the dividend and its share buybacks. I'd rate this new distribution as safe, then. 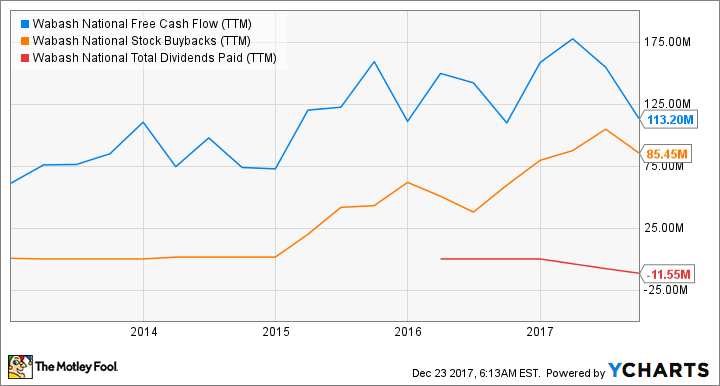 Wabash is handing out its next dividend, which has a low payout ratio of 22%, on Jan. 25 to stockholders of record as of Jan. 4. It yields a theoretical 1.4%.

Say hello to a freshly minted Dividend Aristocrat: Roper Technologies, which just declared a dividend raise for the 25th year in a row. This year's model is an 18% hike to the quarterly payout, pushing it to slightly over $0.41 per share. 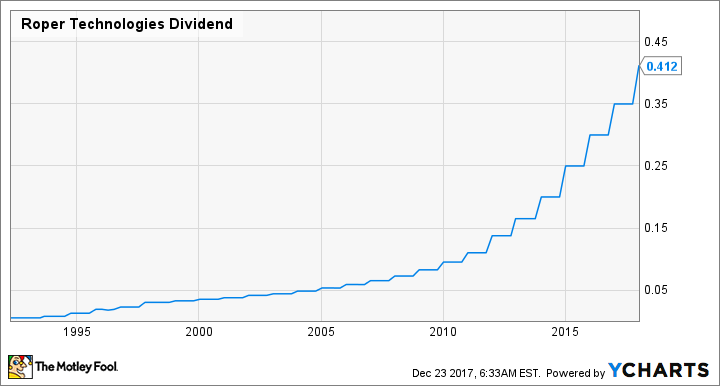 Roper is a very diversified manufacturer that makes a wide variety of products. Ever a busy acquirer, it favors asset-light companies that produce healthy profits. This is reflected in its own results. In Q3, adjusted revenue leapt by 24% to almost $1.2 billion, while per-share adjusted net income rose 20% to $2.36. Of its four business segments, its RF technology and software wing really brought home the bacon, delivering revenue growth of 61% and an operating profit margin of nearly 30%. Happily, this is the company's No. 1 unit in terms of revenue.

With the improved profitability, Roper has managed to substantially reduce its debt load (by almost $900 million this year, to $4.9 billion at the end of Q3). Operating cash flow and free cash flow, which for years have been far more than enough to cover the dividend payout and rounds of share buybacks, are rising. There's no reason to worry about the future of this distribution.

Roper will pay its raised dividend on Jan. 23 to shareholders of record as of Jan. 9. It would yield 0.6% on the current stock price, while its payout ratio is a very light 17%.

The gift of cash

Except for Pfizer, our raisers for this edition hiked their payouts quite substantially. That should give their shareholders an extra shot of confidence in their prospects. After all, what investor doesn't like tearing open the wrapping on a hefty dividend raise?