Shares of wireless charging upstart Energous Corp. (NASDAQ:WATT) soared on Wednesday after the company announced that the Federal Communications Commission certified its first-generation WattUp Mid Field transmitter. The stock was up 79% at 12:15 p.m. EST.

Energous' WattUp Mid Field transmitter is capable of delivering power via radio waves to electronic devices up to three feet away. It can charge multiple devices at the same time, supporting both contact-based and noncontact-based charging. This is the first power-at-a-distance wireless charging transmitter approved under Part 18 of the FCC's rules. 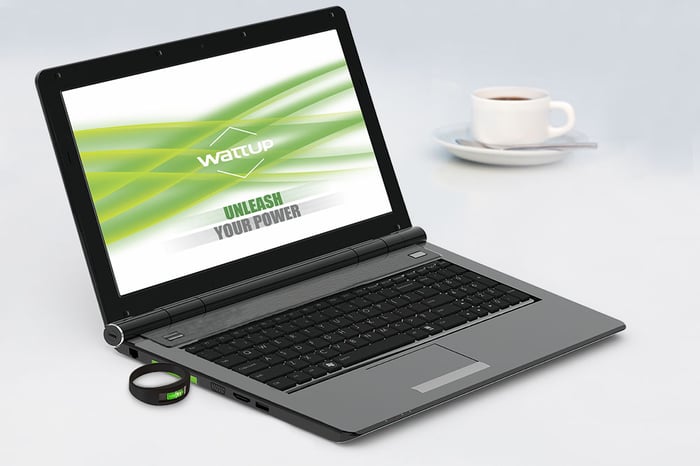 An Energous transmitter next to a laptop. Image source: Energous.

Older wireless charging technologies have received limited adoption over the past 15 years, and are confined to contact-based charging only. The FCC certification of Energous' power-at-a-distance wireless charging transmitter is a major market milestone. It opens up options, outside of just contact-based charging, to Wireless Charging 2.0: an ecosystem where devices can be charged both, via pad and at a distance.

Energous will be demonstrating its technology at CES 2018 in January.

Energous does not yet sell consumer products, and it generates token revenue and big losses. Over the past 12 months, Energous posted a net loss of $53 million. This FCC certification is a positive step, but it's still unclear when consumer products using the technology will hit the market. Once Energous begins generating some real revenue, the stock could soar further if its products live up to the hype.