Now that the GOP tax bill is a fait accompli, investors should take stock of the bill's effects on their holdings.

To date, many analysts have focused on the bill's repatriation provision, declaring Apple the biggest beneficiary. However, repatriation is a narrow issue that will soon be discounted into stock prices.

In the long run, it appears industries currently paying high effective tax rates with significant capital expenditures will benefit most from this bill. The industry that best fits this description is telecommunications: Income-hungry shareholders of Verizon (NYSE:VZ) and AT&T (NYSE:T) should be thrilled. Lower tax rates will benefit high-tax paying companies the most

There's a dirty secret about corporate taxes: Although the U.S. has one of the highest tax rates among developed economies, companies pay a far lower effective tax rate. A report from the intergovernmental Organisation for Economic Co-operation and Development (OECD) pegged those figures at 38.9% and 18.6%, respectively. The difference is due to exemptions and deductions that have littered the tax code; often the existence of those tax breaks is more indicative of the quality of a company's lobbyists than legitimate business needs.

As the chart below shows, Verizon and AT&T pay nearly double the effective tax rate. 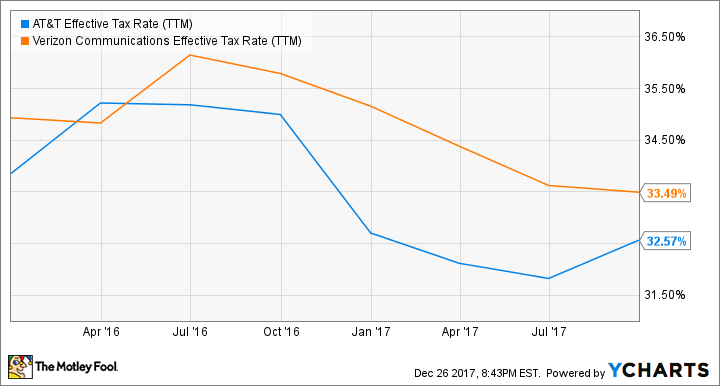 Unsurprisingly, telecoms will benefit significantly from the lower rate. Earlier this month a report from UBS found telecoms would most likely get a boost of 12% in earnings per share, if the bill lowered the tax rate to 25%; in the end, it was lowered to 21%. According to UBS, telecoms will get the highest boost from the plan, with transportation and retail faring almost as well. 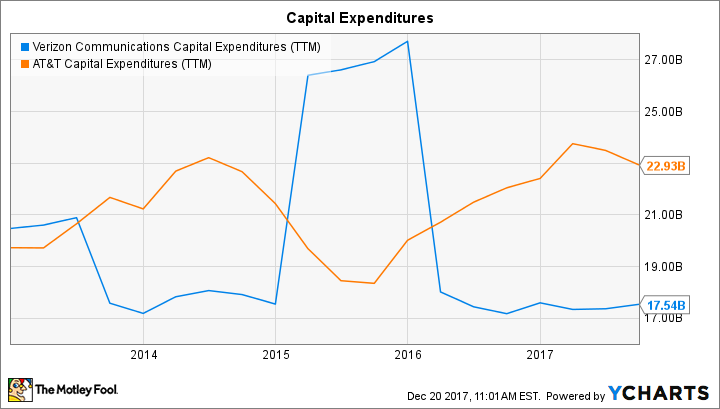 While certain expenditures will continue to be capitalized (initially recorded on the balance sheet and expensed over time via depreciation), this should also provide tailwinds to investors by lowering the weighted average cost of capital for projects, making them more profitable.

This provision couldn't come at a better time for telecommunication firms. Many are grappling on spending large sums of capex on 5G rollout, while questioning the return on their 4G rollout spend.

A potential red flag is the new provision that limits interest deductibility, as both Verizon and AT&T have large piles of debt and required interest payments. The new bill limits the deductibility of net interest expense to 30% of earnings before interest, taxes, depreciation, and amortization (EBITDA) for the first four years, and at 30% of earnings before interest and taxes (EBIT) afterward. The chart below shows net interest income, EBITDA, and EBIT for both companies over the prior year: 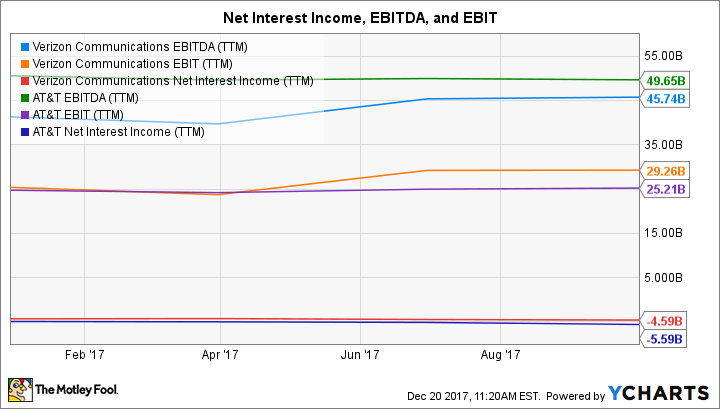 Even with the more-stringent EBIT figure, both look sound in the mid- to high teens. But this provision could limit the ability to borrow in the future, especially if further margin compression happens and interest rates increase.

Dividend investors should be happy with the bill

AT&T and Verizon have mostly missed out on the stock run since the election of Trump, but seem to be among the biggest beneficiaries of the policies enacted during his administration. This bill, and the overturn of net neutrality, should allow both firms to continue paying those massive dividends while growing revenue and earnings.