Among thousands of dividend stocks, only a handful manage to put together the track record necessary to become Dividend Aristocrats. Praxair (NYSE:LIN) is on the verge of joining this prestigious group, with a hoped-for dividend increase in 2018 potentially being the 25th straight year of rising payouts for the provider of industrial gases. Through good times and bad, Praxair has managed to find ways to keep rewarding its shareholders.

Some investors are nervous right now about Praxair's dividend sustainability. In late 2016, Praxair announced that it would combine with industrial peer Linde in a merger of equals. With shareholders having largely approved the deal, it's up to antitrust regulators to finalize the move, which the companies expect to happen late in 2018. If the deal goes through, Praxair's name will go away, but the more important question for dividend investors is what will happen to the payout. Below, we'll take a closer look at Praxair and what's ahead for the industrial gas specialist.

Praxair's historical dividend yield has stayed in a fairly tight range of between about 1.7% and 3% during the 2010s. Fluctuations have generally come from share-price trends, with a slump in late 2015 and early 2016 sending yields to their highs. The subsequent rebound to all-time highs has returned the yield to more normal levels. 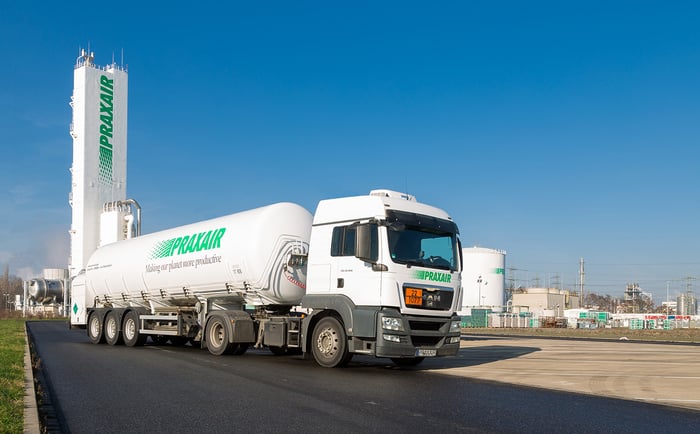 Praxair pays out around 55% of its earnings to shareholders as dividends. For a mature industrial business, that's a sustainable level that implies the possibility of further dividend growth without overextending the company's capital position.

That said, the current level is on the high side for Praxair. Earlier in the decade, the industrial gas company tended to keep its payout ratio between 35% and 45%. Earnings declines in the past couple of years played a role in sending the ratio higher, but bullish investors are optimistic that a recent bounce in earnings could lead the key metric back down to more typical levels in the near future.

Praxair's dividend growth is impressive, with 24 straight years of growth leaving it a year shy of reaching Dividend Aristocrat status. The fact that the company could join the list in 2018 makes it all the more likely that Praxair will want to keep raising its dividend even with a pending merger in the cards. 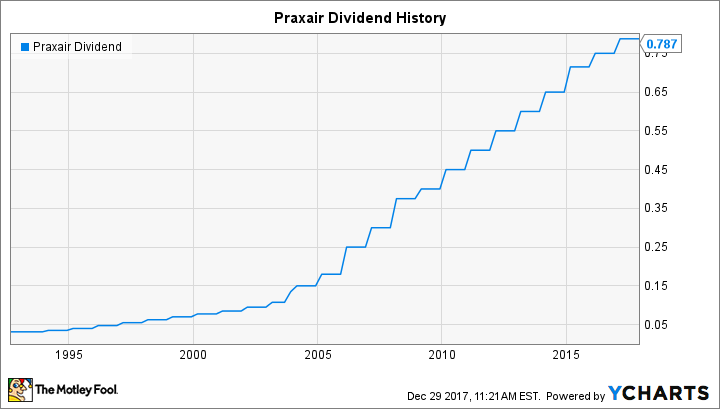 The pace of Praxair's dividend growth has been measured but stable. The most recent boost of 5% in early 2017 was fairly typical for the stock historically, although the past decade has seen the dividend more than double on a per-share basis.

What's ahead for Praxair?

The key to Praxair's success is the condition of the industrial sector, and a strong economy has finally started to bring industrial stocks along for the ride. Praxair's business involves providing process gases like hydrogen, carbon dioxide, and acetylene as well as atmospheric gases like oxygen and nitrogen. When industrial customers are at full production capacity, their demand for these gases goes up, and that makes Praxair more profitable in turn.

Praxair's business isn't the most exciting in the world, but the company has worked hard to put itself in the best financial condition possible. In addition to its dividends, Praxair has bought back its shares aggressively, cutting its share count by more than 10% over the past decade. With free cash flow having worked its way higher over the years, Praxair has been able to use multiple methods for returning capital to shareholders without jeopardizing its ability to invest as necessary in its own business.

The Linde merger is the big wildcard for Praxair, but executives have pointed to the likelihood of uninterrupted dividends. At a conference call discussing the deal, CEO Stephen Angel and CFO Matthew White noted that Linde's dividend policy and payout ratio are similar to Praxair's, and in White's words, "We see no reason why the new company wouldn't follow similar policies, both on a payout ratio as well as a sustained dividend growth rate approach."

Praxair is in a good position to profit from industry growth, and that should support dividend growth for the foreseeable future. Even if the merger goes through and the Praxair name gives way to Linde, shareholders could enjoy healthy and growing levels of income for years to come.