What do the party supplies, healthcare, and metal fabrication industries all have in common? They rely on helium companies. Tantamount to much more than being bullish on balloons, an investment in helium is one that recognizes the vital role the element plays in everything from testing automotive parts, to manufacturing semiconductors, to cooling the superconducting magnets used in MRIs.

With helium found in a variety of applications, demand for the element continues to rise; however, finding an adequate supply is far from simple. Even though it is the second most abundant element in the universe, helium is rather scarce on Earth. Consequently, companies adept at producing and distributing the element represent worthy considerations for investment, so let's take a look at two of the most compelling opportunities for investors: Praxair (NYSE:LIN) and Air Products & Chemicals (NYSE:APD). 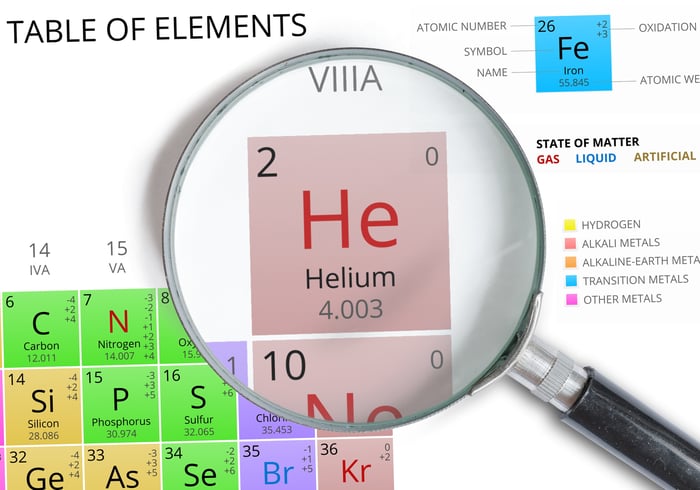 Founded in 1940, Air Products & Chemicals has a long history in the industrial gases business. In terms of helium, though, Air Products can trace its leadership back to the 1950s, when it built the first cryogenic system for extracting helium from natural gas. Shortly thereafter, in the 1960s, the company further proved its leadership by developing the industry's first coiled wound heat exchangers for the helium industry.

Besides industry leadership, corporate culture is an important consideration when weighing the merits of investing in a company. Herein Air Products has earned high praise, further suggesting its value. For the sixth consecutive time, Corporate Responsibility Magazine named Air Products to its list of 100 Best Corporate Citizens in 2017. Further illustrating its leadership, Air Products was named to the Dow Jones Sustainability North America Index 2016/7, signifying its rank among the top 20% of companies in its industry for corporate sustainability performance.

Having developed the first plant for extracting helium from natural gas in 1917, Praxair has emerged as an industry leader in the production and distribution of the gas, but the company's business is much more diverse than just dealing in helium. In fact, Praxair's primary businesses are in the manufacturing and distribution of process gases -- carbon dioxide, hydrogen, electronic gases, specialty gases, and acetylene -- and atmospheric gases: oxygen, nitrogen, argon, and rare gases.

Similar to Air Products' geographically diversified customer base, Praxair also operates in more than 50 countries, subjecting the company to currency headwinds. For example, in fiscal year 2016, Praxair reported revenue of $10.5 billion, which was approximately 2% lower than the $10.8 billion it reported in fiscal year 2015. In the company's 2016 10-K, management noted that "negative currency impacts" reduced sales by 3%. The company's success in generating free cash flow, on the other hand, provides a simpler illustration of how well the company is performing. In fiscal year 2016, Praxair reported an all-time high of $1.3 billion in free cash flow -- a 14.6% increase year over year. 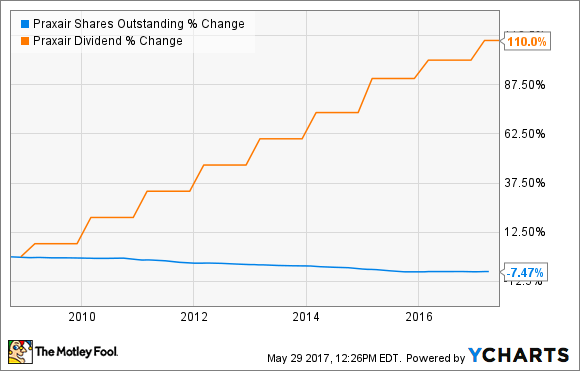 Management has demonstrated a steadfast interest in maximizing shareholder value by both reducing the stock's share count and raising its dividend over the past 10 years, and looking ahead, there's little -- if any -- to suggest that this will change.

Like Air Products, Praxair has also distinguished itself in terms of corporate culture. Earlier in May, the company reported that Forbes named it to its list of the 500 Best American Employers -- a distinction Praxair has received each year since the list's inception in 2015. Forbes isn't alone in lauding Praxair's accomplishments. The Human Rights Campaign named Praxair to the 2017 Corporate Equality Index, awarding the company with a perfect score of 100.

For investors interested in gaining exposure to the helium industry, both Air Products and Praxair are certainly compelling opportunities. Requiring considerable production and distribution facilities, the helium business isn't one that business owners can capriciously jump in to, which suggests Air Products and Praxair retain considerable competitive advantages in that they already maintain the necessary infrastructure.

Looking ahead, Praxair's industry leadership is poised to grow even more substantial as it's currently in the process of acquiring another industry leader, Linde AG, for approximately $35 billion. According to Praxair's press release on the deal, when completed, the transaction is expected to result in "approximately $1 billion in annual synergies, driven by scale benefits, cost savings and efficiency improvements." This isn't to suggest that Air Products is falling by the wayside, though; the 2015 deal it signed with RasGas Company Ltd. for the Helium 3 plant at the Barzan facility in Ras Laffan Industrial City, Qatar, illustrates how the company remains at the forefront of the industry. By some estimates, when the facility becomes operational in 2018, Air Products will become the world's largest commercial supplier of helium.