Please ensure Javascript is enabled for purposes of website accessibility
Log In Help Join The Motley Fool
Free Article Join Over 1 Million Premium Members And Get More In-Depth Stock Guidance and Research
By Rich Smith - Dec 29, 2017 at 11:29AM

Merrill Lynch runs the numbers and finds these two stocks performed well at Christmas. Are they bargains?

Do you love a good sale? Of course, you do. According to a new report just out of Bank of America's Merrill Lynch brokerage unit, this recent Christmas shopping season featured a whole slew of sales on shoes sold at Foot Locker (FL -4.29%) and Finish Line (FINL), with plenty of bargains to be found on products from Nike (NKE 0.39%) and Under Armour (UA -3.70%) (UAA -4.11%).

Problem is, when goods go on discount, that means less profit for their manufacturers and their retailers. That's why Merrill Lynch this morning issued a warning for investors in Foot Locker, Finish Line, Nike, and Under Armour. Instead, Merrill Lynch thinks you should take a second look at Deckers Outdoor (DECK -1.60%) and Columbia Sportswear (COLM -1.52%) instead.

Here are three things you ought to know. 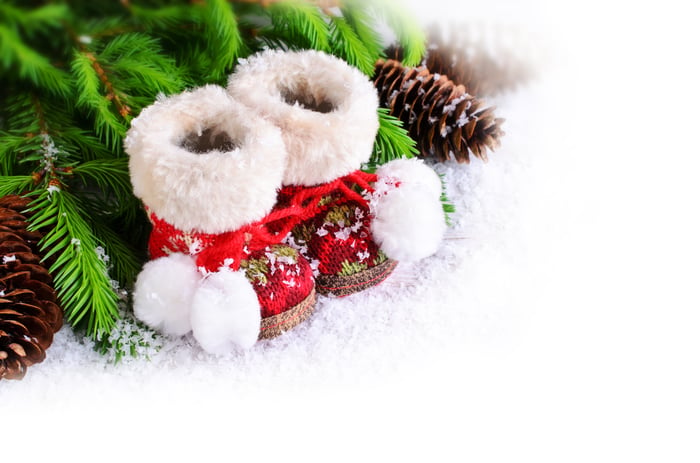 Shoes went on sale this Christmas season, but these pricey stocks are no gift. Image source: Getty Images.

StreetInsider.com covered the details of Merrill Lynch's wide-ranging retail report this morning, breaking the news down into three big themes. Let's begin with the two retailers that Merrill called out for excessive discounting.

According to analyst Robert Ohmes, both Foot Locker and Finish Line held the line on in-store discounts this year, refraining from the excessive discounting that he observed at these stores last year. However, he also observed "more elevated promotional activity" at both retailers for goods sold online. Presumably, this was done in an attempt to combat discounting done by online rival Amazon. But whatever the reason, discounts are discounts, and they can have the effect of eating away at a retailer's gross margins.

2. Bargains available on Nike and Under Armour

Speaking of discounts, Merrill observed that at retailer Dick's Sporting Goods (DKS -1.27%), Under Armour apparel was "the most discounted brand" found in the store, with "select styles" retailing for 30% off. UA in-store "promotions" were less evident after Black Friday than on the day itself, but were still significant.

Similarly, Merrill observed promotional activity at Under Armour archrival Nike. As Ohmes noted, "following a favorable launch schedule in November," sales of Jordan-brand shoes "have decelerated meaningfully." Merrill highlighted "below retail" pricing on Jordan Retro 6 and Retro 13 shoes. Despite the fact that both brands were launched less than two weeks ago, they're already going on sale, which doesn't say much good about Nike's pricing power.

In contrast, Merrill says that Deckers Outdoor (known best for its UGG and Teva brands) and Columbia Sportswear are both refusing to play the discount game.

To the contrary, Merrill spotlighted UGG for taking high-profile steps to enforce a "minimum advertised pricing" strategy on its sheepskin boots, to the extent that it cut off shipments to shoe store The Walking Company in punishment for the latter selling UGGs at a discount last year. Deckers has furthermore resumed selling UGGs at full price on Zappos.com, as opposed to discounting its shoes there last year. Similarly, Merrill notes that "Columbia appeared less promotional" this year than last, and has "gained modest floor space" at its retail distributors, which should translate into higher sales on its higher priced apparel -- resulting in fatter profits. Merrill now sees Deckers earning $0.30 more per share in fiscal 2019 -- $5.25 per share.

Overall, Merrill says that Deckers and Columbia "stood out" in contrast to Foot Locker and Finish Line "for maintaining a firm grip on pricing" this year. In response, Merrill Lynch is raising its price target on both stocks. Deckers Outdoor stock goes to $84 a share, and the price target on Columbia Sportswear stock rises to $75.

Of course, Deckers already costs more than $80 a share, and Columbia stock is at more than $72 a share. Even assuming Merrill Lynch is right in gauging these two retailers as being more successful than most, that still means the most Merrill is promising investors is about a 4% gain from both stocks over the next 12 months, which hardly seems something to get excited about.

No matter how good their pricing discipline might be, I simply don't see much potential for either stock rewarding investors -- not given how much these stocks already cost today.