Thanks to the Republican tax legislation, pharmaceutical stocks are set to continue their heady northward trajectory in 2018. This newly minted tax reform, after all, should spur a flurry of mergers and acquisitions (M&A) activity by permitting companies to repatriate their overseas profits at far more friendly tax rates moving forward.

Not all pharma stocks, however, are strong buys, despite this rising-tide phenomenon. Keeping with this theme, I think Gilead Sciences (NASDAQ:GILD), in particular, is one well-known biotech stock that should be sidestepped by investors next year. Read on to find out why. 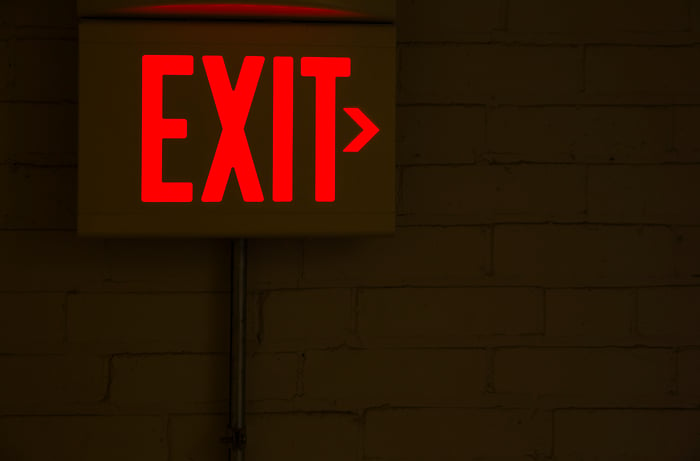 Gilead has been in a pickle ever since its hepatitis C sales starting declining back in 2015. And oddly enough, the biotech curiously decided to plow billions into its shareholder-rewards program instead of acquiring new sources of revenue at the time, despite being absolutely flush with cash. The reason? Gilead's management noted the lofty valuations across the biotech space as its primary reason for taking a pass on a large M&A deal over the course of 2016.

Then things took a turn for the worse. Earlier this year, AbbVie's new hepatitis C drug, Mavyret, was approved by the Food and Drug Administration (FDA), and not long afterwards, GlaxoSmithKline's two-drug HIV combination, Juluca, also got a green light from the agency. In short, Gilead's hep C sales are probably going to fall even faster moving forward, and its own two-drug HIV combo featuring bictegravir is now facing a fierce competitive threat from Glaxo's Juluca.

How did Gilead respond to these new competitive threats? It bought the adoptive-cell therapy company Kite Pharma for an unsightly $12 billion, and then had to dole out another $567 million to acquire Cell Design Laboratories in order to fill in the holes in Kite's cell-therapy platform.

While my rather stark assessment may seem premature, there are some very good reasons to think that this Kite acquisition was a flat-out mistake. First off, Kite's cell-therapy platform has no clear-cut competitive moat over the slew of forthcoming competitors in the space. Underscoring this point, Gilead had to tack on Cell Design Labs simply to keep its newly acquired cell-therapy franchise on par with much smaller companies like Bellicum Pharmaceuticals or Ziopharm Oncology from a technology standpoint.

Next up, this mid-sized acquisition still won't change Gilead's near-term fortunes from a top-line perspective. Gilead's top line, after all, is forecast to fall by a whopping 14% next year, and there's no surefire line of sight as to when this acquisition will be accretive.

The commercialization of these first-generation CAR-T therapies, after all, is probably going to be far more difficult than most investors anticipate. Besides the upcoming battle over reimbursement due to their sky-high price tags, these first-generation CAR-T therapies require patients to visit specialized clinics, and  will almost certainly present a serious challenge to their uptake in the beginning. Roche, for example, cited this very reason for initially taking a wait-and-see approach with this novel anti-cancer platform.

Ultimately, I think Celgene will be the 800-lb gorilla in the adoptive-cell therapy space, and Gilead will get pushed aside as a minor player. Once this technology is further de-risked and becomes easier to manufacture, you can bet the farm that pharma giants like Amgen, Pfizer, and Roche will all jump in with both feet.

In my view, Gilead's decision to kick the can down the road on a major acquisition in 2016 was a glaring strategic mistake that's going to have long-tailed consequences for its shareholders. The long and short of it is that Gilead was forced to buy Kite because AbbVie and Glaxo were breathing down its proverbial neck in the hep C and HIV markets, respectively. Compounding matters, Gilead also pitted itself directly against Celgene, which has both a strong external pipeline in adoptive cell therapy and is the undisputed king of hematology.

Another way to think about Gilead's acquisition of Kite is in terms of the opportunity cost. Previously, I argued that Gilead could have gobbled up a smattering of companies to build a respectable portfolio of more traditional oncology drugs, and perhaps bolstered its presence in the high-value anti-inflammatory space, as well. These acquisitions would have both stabilized the biotech's top line, and likely paid for themselves within two or three years. This Kite deal, on the other hand, isn't accretive in the near term, and it probably won't pay for itself in even five years from now.

All told, Gilead's decision to buy Kite is unquestionably an inflection point for this once towering giant of the biotech industry. As Gilead faces myriad challenges in both commercializing a first-gen CAR-T and staying ahead of a growing pack that's led by Celgene, of all companies, I'm not optimistic about the biotech's chances moving forward. That's why I think investors may want to either sell this former top biotech, or avoid it altogether in 2018.