Please ensure Javascript is enabled for purposes of website accessibility
Log In Help Join The Motley Fool
Free Article Join Over 1 Million Premium Members And Get More In-Depth Stock Guidance and Research
By Keith Noonan, Chris Neiger, and Daniel Miller - Dec 31, 2017 at 8:25AM

These three stocks posted huge gains in 2017 and have characteristics that could help them continue to be market beaters.

Owning a stock that's doubled in value in just a year's time is certainly cause for celebration, but seasoned investors know to weigh explosive performance against the potential for continued gains. It's a time-tested reality that what goes up often comes down.

On the other hand, truly great companies tend to keep winning and can present investment opportunities that create life-changing returns over the long term. With that in mind, we asked a panel of Motley Fool investors to profile a stock that gained at least 100% in 2017 and still has gas in the tank. Read on to see why they identified Control4 (CTRL), Shopify (SHOP 0.61%), and Take-Two Interactive (TTWO -0.07%) as companies that are primed to keep their big winning streaks alive. 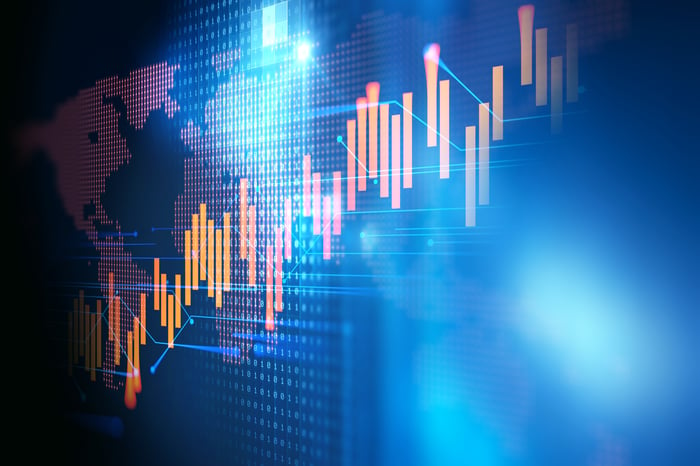 Chris Neiger (Shopify): Shopify is a cloud-based e-commerce platform that allows small and medium-sized businesses set up online shopping, track shipments, publish their own blog posts, and even manage inventory -- and over the past 12 months, its share price has skyrocketed 144%.

Shopify is doing so well right now because the company is experiencing phenomenal user growth and solid top-line increases. The company had about 200,000 merchants using its platform two years ago but now boasts more than 500,000 merchants from 175 countries. All of that growth has helped spur the company's sales, and in the third quarter Shopify's top line popped 72% year over year. The company is seeing the overall dollar value of online sales made through its platform increase as well. Transactions conducted through Shopify hit $6.4 billion in the third quarter, a huge 69% jump year over year.

But aside from its impressive customer and top-line growth, Shopify also has a massive trend on its side. Online shopping is still a fast-growing market, and many small and medium-sized businesses need platforms like Shopify to get them up and running. Retail e-commerce sales are expected to reach $638 billion in 2022, up from $409 billion in 2017.  Shopify's already entrenched in the e-commerce space, and any expansion in this market should help build on the company's current position.

Citron Research, which often releases negative research about companies, said in October that it questioned Shopify's customer growth and said that many of the company's small business customers will eventually fail, leaving Shopify with less clients. Shopify addressed the report and said that it defends its business model. And while it's a certainty that some of Shopify's clients will fail at their businesses and leave its platform, the fact remains that Shopify continues to add new clients to replace them and is already proving that it can grow its sales from that customer expansion. If the company continues on this trajectory, then it's easy to believe this stock could easily double once again.

Daniel Miller (Control4): Over the past year, Control4 has soared 186%, and despite the massive gains, the company is still in the early innings of a long game. The company is a leading global provider of networking systems for homes and businesses that enable consumers to connect anything from control of lighting, music, video, security, and communications -- basically, if you have a house filled with expensive technology, Control4's products can probably make it all work together seamlessly.

Control4 is a pro-installed system provider and generally connects between 25 and 125 household or business devices. The typical cost for these premium setups can reach up to $50,000 or higher. The company's penetrated only about 2% of its target market audience of U.S. households generating $150,000 in annual income or more -- and that's not even considering its global market potential.

Investors can also rejoice that the company's financials are strong. During the third quarter, Control4 posted record revenue at the high end of its guidance, which was 17% year-over-year growth, and a 49% increase in adjusted earnings earnings. It also ended the quarter with nearly $72 million cash and no debt. With growth, a solid balance sheet and so much market potential, it's easy to see why its stock price has doubled and still has room to grow.

On to the next level

Keith Noonan (Take-Two Interactive): 2017 was a great year for video-game publishers, and Take-Two Interactive was a standout performer. The company's stock has gained roughly 120% over the past 12 months, and the company is in position to continue delivering wins for shareholders.

Take-Two's stellar gains can largely be traced to its hit game Grand Theft Auto V (GTA V), which refuses to slow down. The title, which first released in 2013, was one of 2017's best-selling games and also generated vast amounts of high-margin revenue through its online mode. Essentially, GTA V is an evergreen title with a thriving online community that's keeping players engaged and spending on in-game currency -- producing a huge return on investment for Take-Two. The company sees this hugely beneficial trend continuing and is guiding for revenue from the game to increase in fiscal 2018 -- an incredible feat as the game moves through its fifth year on the market.

GTA V gives the publisher a great foundation to build on as it heads into a new growth phase. The company is ramping up its game-development pipeline to release big games more frequently and also taking a more aggressive approach to the mobile space. With Take-Two still benefiting from the growth of video game sales transitioning away from brick-and-mortar retail outlets and to digital downloads, that sets up some very compelling growth avenues for its core business in the near term. Looking a bit further down the line, the company is also in good shape to take advantage of high-growth opportunities such as esports and emerging technologies such as mixed reality.

Take-Two's huge gains in recent years mean that its performance is under increased scrutiny, but the company has never looked stronger and appears to be in position to take advantage of industry tailwinds. All things considered, I think long-term shareholders can look forward to seeing the stock blow past its current high score.