Please ensure Javascript is enabled for purposes of website accessibility
Log In Help Join The Motley Fool
Free Article Join Over 1 Million Premium Members And Get More In-Depth Stock Guidance and Research
By Scott Levine - Dec 31, 2017 at 8:07AM

This regal dividend payer could add some luster to investors' portfolios.

When digging into dividend-paying stocks, investors often overlook the gold sector. Since gold mining is capital-intensive, mining companies are usually uninterested in returning cash to shareholders as they must continually reinvest in their businesses, ensuring they remain profitable amid volatile gold prices. But this doesn't mean that dividend-seeking investors should completely forsake companies dealing in the yellow stuff.

Unlike miners, which are actually pulling the metal out of the ground, royalty and streaming companies such as Royal Gold (RGLD 3.25%) and Franco-Nevada (FNV -4.29%) are basically specialized financiers. Providing up-front payments to miners, they receive, in exchange, the right to purchase the mined metal at a preset price or to receive a percentage of mineral production. Although some gold mining companies represent decent opportunities, the better option for investors is a royalty and streaming company. But which one to choose? 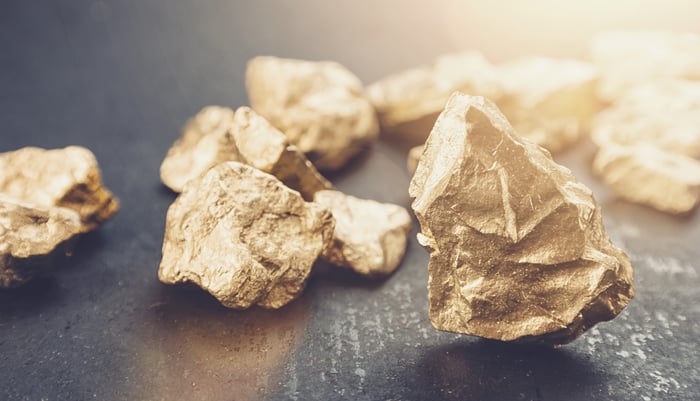 Digging into the past

If you're in search of the best dividend stock, it's worth taking a look in the rearview mirror. Of course, a company's previous performance doesn't guarantee its future performance, but it can provide some insight into the company's culture. 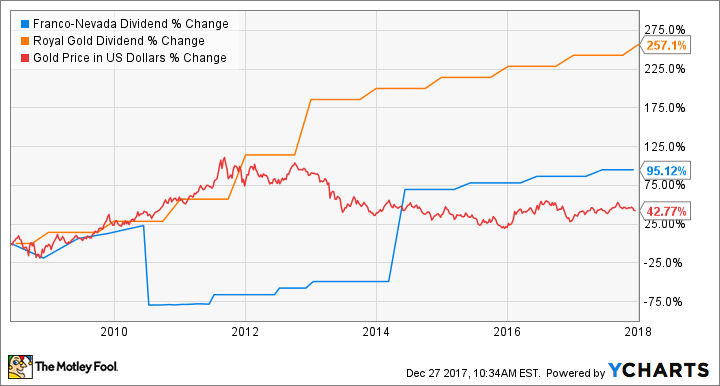 Clearly, Royal Gold and Franco-Nevada have both demonstrated a strong commitment to raising their dividends. What's more noteworthy, however, is that they have done so amid volatility in the price of gold. Unlike miners, which must tighten their purse strings when the price of gold falls too precipitously, royalty and streaming companies are less susceptible to the market's whims. For example, over the same period, Barrick Gold (GOLD 2.09%) and Newmont Mining (NEM 2.51%), two of the market's largest gold miners, reduced their dividends by 85% and 25%, respectively. 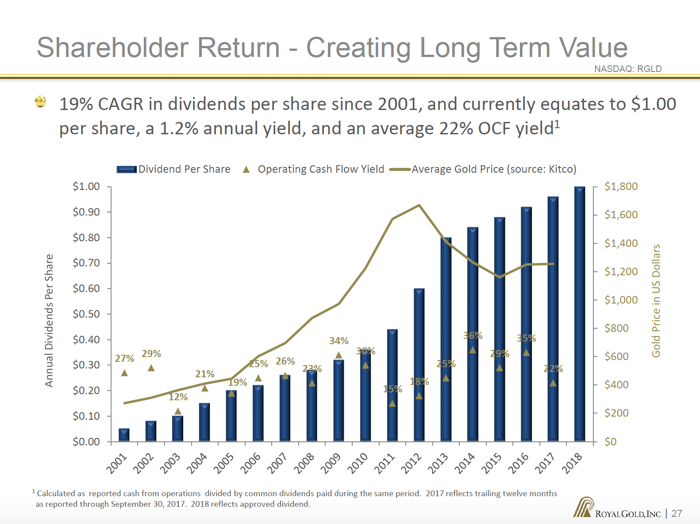 Of the two royalty and streaming companies, though, it's Royal Gold that glitters a little more brightly. Whereas Franco-Nevada has a shorter history, having held its IPO in December 2007, Royal Gold can trace its history for rewarding shareholders back to 2001.

... and looking into the future

A culture that supports dividend growth is certainly desirable, but it means little if the company doesn't foresee growth on the horizon. For Royal Gold and Franco-Nevada, though, it appears that prospective growth is not a concern. Of the 195 property interest in Royal Gold's portfolio, there are 40 mineral-producing assets. In the near-term, Royal Gold expects two projects to commence gold-producing operations in 2018: Cortez Crossroads and the Penasquito Pyrite Leach Project. Looking farther down the line, we find Royal Gold has 21 projects in development and 134 projects in the evaluation and exploration phases.

For those investors eager to add gold to their portfolios but wary of overexposure to the mineral, Franco-Nevada represents the better opportunity. Besides the 260 mineral assets -- 47 in the production phase, plus 40 and 173 in the development and exploration phases, respectively -- in the company's portfolio, there are 61 oil and gas-producing assets and 19 oil and gas interests in the exploration phase. This well-diversified portfolio mitigates the risk of a decline in the gold market or in any of the other commodities (silver and platinum group metals, for example) in which the company deals.

Both royalty and streaming companies present compelling opportunities, but I think Royal Gold distinguishes itself as the better opportunity after taking a look at the companies' financials. Over the past 10 years, for example, Royal Gold has had an average annual payout ratio of 52%, according to Morningstar. On the other hand, Franco-Nevada has assumed a much more aggressive approach toward returning cash to shareholders, averaging an annual payout ratio of 141% over the past nine years (the length of time it has been a public company), also according to Morningstar.

Although there have been years when Royal Gold's payout ratio has exceeded 100%, meaning its dividend payments surpassed its net income, it has taken a more conservative approach in other years, resulting in a fairly conservative average payout ratio of 52% since 2008. Franco-Nevada's approach, however, seems unsustainable, suggesting that a reduction in the dividend may be in the company's future.

Although Royal Gold and Franco-Nevada -- both with bright futures ahead of them -- offer compelling opportunities for dividend seekers, I think Royal Gold represents the better option. Its track record of consistently raising its dividend paired with its conservative payout ratio suggests that this is a worthy choice for adding some glitter to investors' portfolios.