The recent outlook meeting from 3M Company (NYSE:MMM) showed it on track with its plan for 2016 to 2020; the numbers all add up. Alongside industrial peers like Illinois Tool Works (NYSE:ITW), Dover Corp. (NYSE:DOV), and Honeywell International (NASDAQ:HON), the company has been raising estimates on the back of stronger-than-expected sales growth.

It's been a good 2017 for 3M Company, but what will 2018 bring? Let's take a look at the recent outlook meeting, and focus on the one thing 3M investors need to see next year. 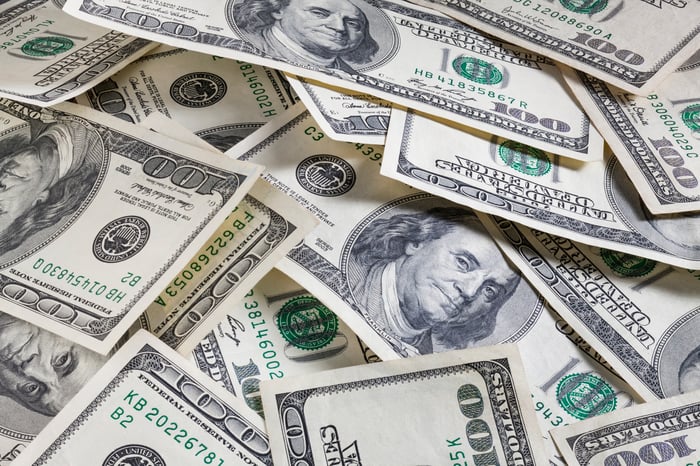 The positive momentum in 3M's trading can be seen in the consecutive guidance upgrades given through the year. It comes as the industrial economy -- particularly in the U.S. -- improved, helping 3M increase sales and earnings growth.

Of course, 3M isn't alone in benefiting from cyclical growth. For example, Illinois Tool Works has seen good growth in 2017, led by revenue growth in its welding, test and measurement, and electronics segments -- its more economically sensitive businesses. Meanwhile, Dover Corp. has benefited both from the recovery in industrial conditions and from better spending related to oil and gas.

A look at 3M's organic growth by segment shows that its industrial segment and its electronics and energy segment both grew strongly compared to 2016 -- just as you would expect, as they tend to be more sensitive to economic conditions. 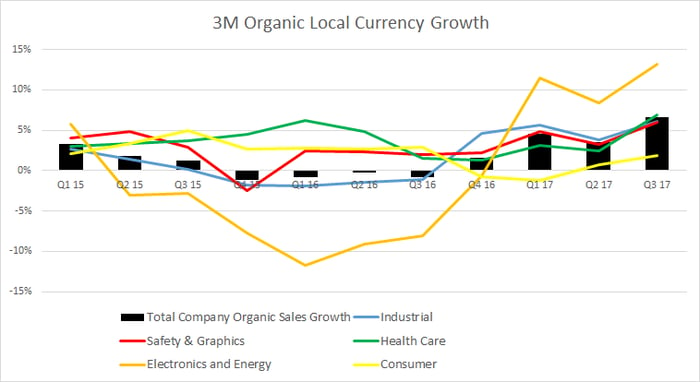 It's interesting that other beneficiaries of a stronger industrial economy, such as Dover Corp. and Honeywell, have decided to restructure and tighten their focus on core activities. Dover plans to spin off its upstream energy businesses, collectively called Wellsite, and Honeywell intends to spin off two separate companies -- its homes and global distribution business, and its vehicle-focused transportation systems business.

In contrast, 3M's plan is to continue investing in its existing businesses in order to create differentiated products (a point I will return to shortly), while also making selected acquisitions and divestitures. Management's outlook for 2018 is mixed, but positive overall. For example, revenue growth is forecast to be ahead of its five-year plan, but increased capital expenditures will eat into free cash flow generation.

While 3M is broadly on track with its mid-term objectives, its recent growth has come from volume growth rather than price increases. This is a key point because 3M prides itself on producing highly engineered differentiated products. In other words, the company views its products as not easily commoditized, and therefore able to command a pricing premium.

Unfortunately, the chart below suggests 3M took full advantage of a pickup in end markets through increasing volumes but wasn't able to increase pricing. Perhaps its products aren't as differentiated as management hopes they are. 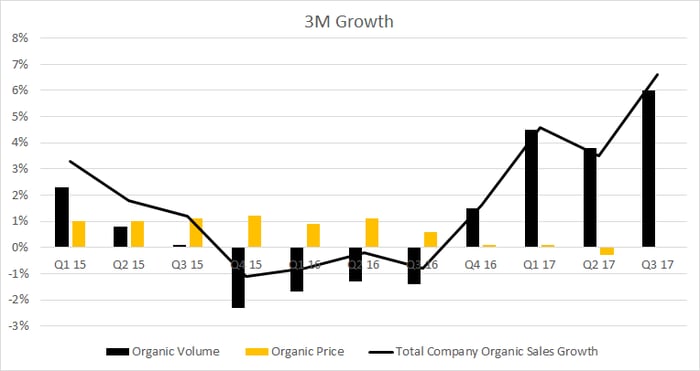 Earlier this year, management predicted an improvement in pricing in the second half, but it hasn't materialized yet. However, that didn't stop CFO Nick Gangestad from predicting a pricing improvement in the latter half of 2018 -- driven by the industrial segment and safety and graphics segment.

It's something to look out for because any kind of longer-term pricing difficulty would suggest that 3M is having issues developing the kind of differentiated products it prides itself on. Moreover, if the economy slows, 3M won't be able to rely on volume growth to grow sales.

Economic growth looks likely to help 3M in 2018, and the company has been doing a good job with volume growth. The question is what happens if growth slows in the future. A forward price-to-earnings ratio of 26 leaves little room for error. And although the company has a decent outlook for 2018, it doesn't mean investors should buy a stock that arguably has a lot of good news already priced into its valuation.