After pulling back hard on Friday -- albeit after a stunning rally early last week following the FCC approval of a compelling new wireless charging product -- shares of Energous Corporation (NASDAQ:WATT) were up 16.6% as of 3:30 p.m. EST Tuesday ahead of this year's Consumer Electronics Show in Las Vegas. 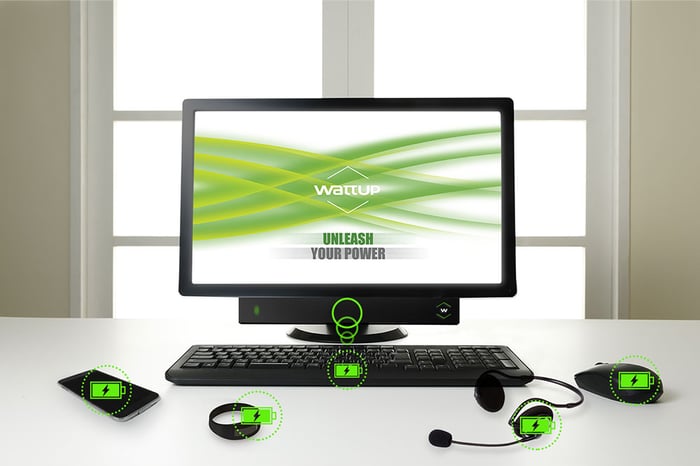 Recall shares of Energous skyrocketed nearly 170% last Wednesday when it announced an industry-first FCC certification for its WattUp Mid-Field transmitter, which is capable of charging electronic devices at a distance of up to three feet. Then Energous stock continued to climb on Thursday as Roth Capital analyst William Gibson reiterated his "buy" rating on the stock. Gibson predicted WattUp-enabled devices should begin appearing in shipped products as soon as the first quarter of 2018, and generate revenue of as much as $169 million this year.

On Friday, however, Energous gave back a hefty chunk of those gains, plunging more than 38% as traders took profits and short-seller Citron Research tweeted to criticize Gibson's upgrade, saying Energous was being deceptive in touting its FCC win and that WattUp "is not ready for primetime."

Nonetheless, investors obviously remain excited for the prospects of WattUp as the company is set to showcase the product to CES attendees early next week.

According to Energous CEO Steve Rizzone during November's quarterly conference call, there will be at least four WattUp-enabled devices from four different licensees on display and available for demonstration at the world-famous electronics show. You can be sure, then, that industry watchers will be paying close attention to which licensees have already embraced WattUp.

Investors should also keep in mind that Energous has yet to receive approval for its even more exciting WattUp far-field transmitter, which can charge and power devices from up to 15 feet away. To be sure, in the Roth upgrade last week Gibson predicted that the initial win should make future FCC certifications easier to come by, expressing hope that we should receive more positive news to that end in the coming weeks. If that turns out to be the case, it would almost certainly drive shares of Energous to even more impressive heights.