The industrials sector, in general, had an incredibly strong 2017, with several stocks across various industries, be it heavy machinery, electrical equipment, aerospace, or building materials, soaring double digits. For the ones that didn't, it was more about internal struggles than macro headwinds. Industrial stalwart General Electric (NYSE:GE) is, by far, the best example: From tumbling profits to a major management shakeout to a massive dividend cut, General Electric gave investors enough reasons to fume.

Yet, despite GE's jaw-dropping 45% plunge, the Dow Jones Industrials capped 2017 with a solid 25% gain, reflecting sectoral strength that should spill over to 2018. For investors, that could mean another richly rewarding year ahead if they're invested in fundamentally strong, growth-focused industrial stocks such as 3M (NYSE:MMM), Illinois Tool Works (NYSE:ITW), and Emerson Electric (NYSE:EMR). Check out the growth projections and plans for each of the three companies below before you decide which ones to invest in.

2017 was the best among 3M's past five years, as the company scored a 32% gain. CEO Inge Thulin is optimistic about 2018: During 3M's pre annual-outlook meeting in December, Thulin said, "The 3M team is delivering a robust performance in 2017, and is well-positioned to build on that momentum in 2018 -- including strong, broad-based organic growth and expanded profitability." 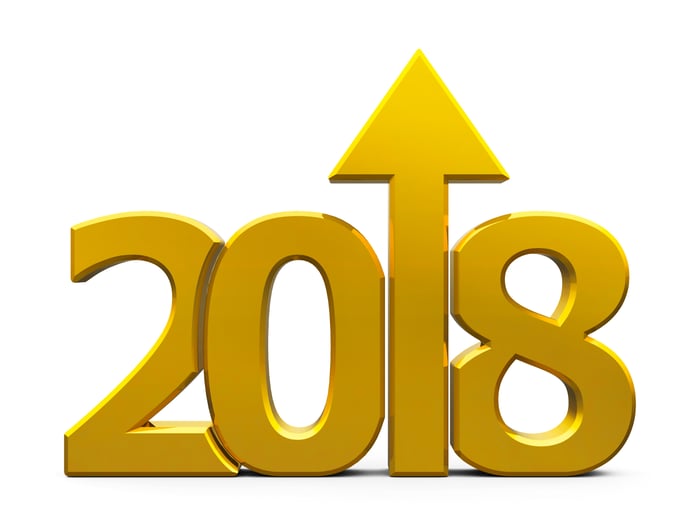 Some industrial stocks could reward you handsomely in 2018. Image source: Getty Images.

3M's portfolio has changed radically in the past five years, with the company reducing its businesses from 40 to 24 through aggressive restructuring. 3M isn't done yet: Just last month, it announced plans to sell its communication-markets division for $900 million in 2018. 3M outlined an encouraging five-year growth plan for 2016-2021 that calls for 8%-11% growth in earnings per share and 100% free-cash-flow (FCF) conversion (percent of net income converted to FCF).

In line with its goals, 3M is on track to end fiscal 2017 with 10%-12% growth in earnings per share (EPS). For 2018, the company is projecting 3%-5% organic and 6%-10% EPS growth, which looks achievable given the strength in important segments like electronics. As 3M's profit rises, investors should be doubly rewarded in the form of higher share price and dividends. 3M boasts an incredible dividend history, and there's absolutely no reason to believe that it won't reward shareholders with another dividend hike in 2018, going by its encouraging EPS-growth goals.

As a hugely diversified conglomerate with seven businesses that serve several major industries, Illinois Tool Works is one of the best ways to gain exposure to the industrials sector. And what better time than now to consider the stock when the company has laid down ambitious growth goals for 2018-2022. Some of Illinois' performance targets for the five-year period include:

Illinois is already growing rapidly, targeting EPS growth of 17% at the midpoint for FY 2017. EPS in FY 2018 is projected to grow another 7% at the midpoint from FY 2017's midpoint earnings estimate. Not every company offers investors such operational foresight.

What matters is that each of Illinois' seven business segments -- automotive OEM, food equipment, welding, test and measurement and electronics, polymers and fluids, construction products, and specialty products -- is expected to contribute to its growth. This diversity hugely helps Illinois maintain growth on its top and bottom lines. The company is also a dividend champion: It's increased its dividends every year for more than five decades and is growing them at a compounded average rate of 15% in just the past five years.

With management aiming to bump up its dividend payout from 43% to 50% by 2020, investors can expect fatter dividend paychecks in 2018, even as they watch Illinois' earnings and share price rise.

2018: A year of automation and acquisitions

2017 was an important year as Emerson wrapped up its portfolio-restructuring plan, mainly divestitures, initiated two years ago and managed to grow its sales by 5% in the fiscal year ended Sept. 30, 2017 after a weak 2016. While loss of sales from divested businesses hurt the company's bottom line, its earnings from continuing operations grew 4% during the year. More importantly, Emerson converted 95% of its net income into FCF worth about $1.4 billion in 2017.

Emerson Electric is making huge headway into future trends such as the Industrial Internet of Things. Image source: Getty Images.

Having streamlined its portfolio, Emerson is now set to "position the company for the next generation." 2018 should be the start, when I expect some big announcements coming in, especially after Emerson's recent $29 billion offer to acquire Rockwell Automation in a bid to create the world's leading automation company fell through. Flush with cash and a manageable debt-to-equity ratio of 0.44, Emerson has the leeway to tap external funding for mergers and acquisitions, if required.

For now, Emerson projects its sales to grow by 8%-10% and EPS by 5%-13% in FY 2018 as it continues to make small bolt-on acquisitions, especially in automation. For those of you who may not know, Emerson is also among the handful of companies to have increased its dividend every year for at least 60 years. In short, Emerson has all the right ingredients in place for growth in 2018 and beyond.