Oh, how the mighty have fallen!

But there are some reasons to be hopeful that GE will turn itself around and that the stock price will move northward again. Maybe not back up to $40, but enough to make it worth considering buying in at these prices. 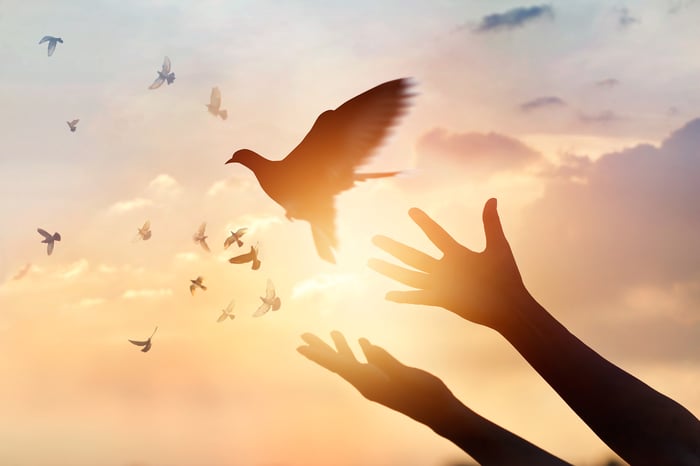 Hope has been in short supply at General Electric lately, as the stock's underperformance trend has kept on coming. But could it be worth buying at these prices? Image source: Getty Images.

I made the mistake of believing that after the departure of hated CEO Jeff Immelt -- and, boy, did investors love to hate on Jeff Immelt -- that the market would give new CEO John Flannery a bit of a break while he evaluated the business and formulated a plan for the company. Not so: The share price headed steadily downward during Flannery's tenure, and upon the plan's announcement -- which included a 50% dividend cut -- collapsed even further.

But the plan itself has merit: GE is going to exit several of its businesses, including the low-margin consumer lighting unit and transportation. It will eventually exit its stake in Baker Hughes, a GE Company (NASDAQ:BKR) that was formed through the merger of GE's oil and gas unit with oilfield services company Baker Hughes. Coupled with other recent divestitures -- the water unit, consumer appliances, and much of GE Capital -- the company is going to be far more focused than before.

A moat, a demand, and a brand

You could argue that these are three different reasons, but they're all facets of one of GE's biggest strengths -- the very nature of its business is self-rewarding.

Here's what I mean: GE makes giant pieces of important industrial machinery. Plane engines, power turbines, ultrasound machines. These markets may wax and wane, but the world isn't about to stop needing power, airplanes, or cutting-edge healthcare anytime soon. In fact, if anything, we're going to need more of these machines as the global population increases.

But it's not like you can get a jet engine from just any place. If you're building a plane, you're going to buy the engine from a company you trust to make reliable jet engines; you aren't going to hit up Shady Rick's Discount House of Turbines. Not that such a business exists, because the start-up costs to set up manufacturing of large and complex machinery are enormous. That's why so few companies are in the businesses GE is in, and why GE's backlog keeps growing, quarter after quarter, year after year.

GE's brand and reputation, its competitive moat, and the high barriers to entry in its industry are all factors that work in GE's favor. They also tend to favor industrial conglomerates in general, like GE's peers Honeywell (NASDAQ:HON), Siemens (OTC:SIEGY), and United Technologies (NYSE:RTX). It's one reason GE has been around for more than a century, and why it's probably going to be around -- in some form or other -- in another 100 years.

After years of hovering well above those of its peers, GE's valuation metrics have finally come down to comparable levels:

GE's P/E ratio and EV to EBITDA ratio on a trailing 12-month basis are now lower than Honeywell's. Its forward P/E is lower than any of its peers (Siemens does not provide forward data). Its dividend yield is also right in the middle of its peer group. When the lower share price is fully factored into the trailing 12-month period, its valuation metrics will probably improve even further.

One takeaway from this chart is that Siemens is sporting very attractive valuation metrics right now, and a higher yield than GE to boot. Another takeaway is that -- at least from a valuation standpoint -- GE seems to be much more reasonably valued than it has been in past years, meaning that the stock might have room to rise.

GE's share price is almost certain to rise at some point. The question is, when will it happen, and how far will it go? That's not an easy question to answer, because there are still so many questions about what GE will look like and how it will operate when it gets to the end of Flannery's transformation process. Still, there are at least a few reasons to hope that it will happen.

It may not happen quickly enough to make it worth the wait. However, it's probably worth waiting at least a quarter or two to see how things are shaping up before you exit your position. If you can stand the risk, you might (maybe) even want to pick up a share or two at this price. After all, there are worse things than a 2.3% yield and a hope that Flannery can surprise us in the new year.