There are certainly risks in a buying stock that is either unloved or virtually ignored by the markets -- perhaps the company is disdained for good reason. But in the case of Martin Marietta Materials (NYSE:MLM) , its stock is well positioned for growth despite being ignored by investors in 2017. And General Electric (NYSE:GE) has hit hard times before, but it will again see better days.

Martin Marietta Materials shares were almost flat in 2017 while the major market indexes continued to set record after record. The company is America's second-largest producer of construction aggregates -- crushed stone, gravel, and sand -- and is strongest in key markets such as Texas and the Southeast. Despite this autumn's hurricanes slowed sales, requiring it to cut its 2017 guidance, the future is still bright. Housing starts are rising in response to the needs of millennials, who are beginning to form families, and the country has major infrastructure needs that will require government spending. Those two factors alone should help improve demand for aggregates nationally, but the Texas market provides a significant opportunity all on its own. 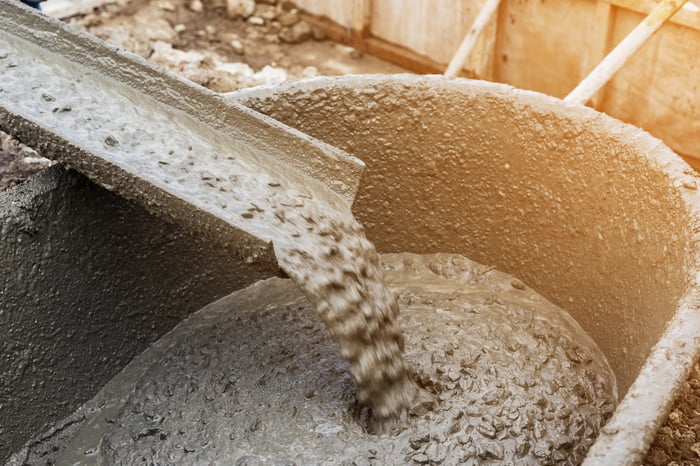 Martin Marietta has an eye firmly fixed on what it calls the "Texas Triangle": an 85,000-square-mile region with vertices at the Dallas-Fort Worth-Arlington metro area, the Houston region, and San Antonio. That triangle contains roughly 71% of Texas' population, and is poised for population and construction growth thanks to a favorable business and tax climate. Martin Marietta estimates each new person there generates between eight and 12 tons of annual aggregate demand; its stronghold in a region that connects three of the country's top 10 cities is a competitive advantage.

Martin Marietta might not be a growth stock, but it possesses a strong balance sheet that could enable it to scoop up valuable acquisitions. Also, its quarries are another strength, as the permitting process for new ones is difficult, which limits new competition. While investors ignored Martin Marietta during 2017, look for its shares to take off in the years ahead if governmental infrastructure spending gets a boost and Texas' population continues to increase. 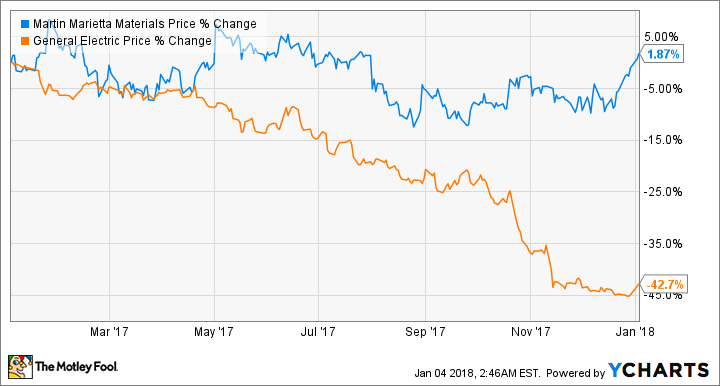 General Electric had a pretty rough 2017 which culminated in the company cutting its quarterly dividend by 50% to $0.12 per share. That move, which will save it $4.1 billion annually, marked only the second time GE had cut its dividend since 1899. But it helped earn the company the unfortunate distinction of being the Dow's worst performer last year.

One thing in investors' favor is that the mid-2017 departure of CEO Jeff Immelt puts pressure on his replacement, John Flannery, to make serious changes, and quickly. Amplifying that pressure is the threat that GE may wind up on the Dow Index chopping block; if it loses its spot on the prestigious industrials index, it will likely take a toll on its stock price.

While GE's bets on the power and energy industries have been poorly timed for investors, not all of the company's business segments are dumpster fires. Some anticipate that GE will focus more on its healthcare business, which is posting mid-single digit revenue growth and consistently improving its profit margins. And its aviation business is poised for growth in the global commercial aircraft market, where there is ample demand for jet engines as well as the services it offers.

Given GE's struggles since the financial crisis, it's easy to forget the company still dominates in a majority of the businesses where it competes. The massive turnaround and restructuring effort it's undergoing will be difficult, but one thing is almost certain: GE will still be here in a decade. And if it can continue to cut costs, better manage its working capital, fix its struggling power generation business, and continue to improve its healthcare and aviation units, it will reward those long-term investors willing to take on some risk during the company's period of weakness.