Shares of credit card processor Mastercard (NYSE:MA) are enjoying a nice 2% bump in early trading Thursday. On the one hand, this isn't too surprising. Mastercard appears to be benefiting from a positive note from Tokyo-based Mizuho Securities, which announced this morning that it is upgrading Mastercard stock and assigning the shares a $175 price target.

On the other hand, though, Mastercard's rise is a bit surprising, given that at the same time Mizuho was upgrading it, analysts at RBC Capital -- a much better-rated analyst on Motley Fool CAPS -- decided to downgrade Mastercard.

So what's up with that? Here are three things you need to know. 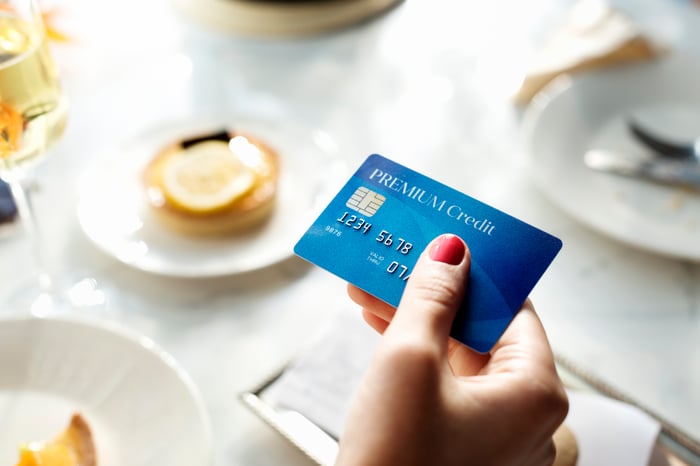 Which credit card stock is best? RBC thinks it knows the answer -- and may be right. Image source: Getty Images.

According to Mizuho, this banker has "conviction" that Mastercard will produce "low double digit net revenue growth" this year and, with the help of share buybacks, turn that into "high teens EPS growth."

This broadly accords with what investors have come to expect from Mastercard in years past. Over the last five years, Mastercard has booked an average of 11% annual revenue gains and parlayed those into 16% annual gains in net income, according to data from S&P Global Market Intelligence. In fact, Mizuho's one-year estimates might even seem conservative, given that over the next five years, analysts surveyed by S&P Global predict the stock will accelerate net earnings growth to nearly 19% per year.

So why is RBC downgrading?

Be that as it may, RBC Capital has nonetheless decided it's time to downgrade Mastercard shares. And yet, that news isn't quite as bad as it may sound.

Prior to today, RBC has considered Mastercard stock its "Top Pick" in the payments sector. After seeing Mastercard surge 47% in 2017, however -- proving RBC right in the process -- RBC is pulling back a bit. (The analyst's "downgrade" today only takes Mastercard's stock rating down to outperform, after all.) What's more, RBC tells us (according to TheFly.com) that it expects the same trends of rising oil prices and favorable exchange rates that benefited Mastercard in 2017 to do so again in 2018. Mastercard's revenue should accelerate, and 2018 will see more consumers than ever before using plastic instead of cash to pay their bills.

Result: At the same time as RBC changes its rating, per se, the analyst is increasing its price target on Mastercard stock -- all the way to $180.

One stock that's better than Mastercard

The upshot of all this is that while RBC isn't convinced Mastercard stock will beat all comers in 2018 as it did in 2017, the analyst still likes Mastercard quite a lot -- and predicts the stock will go up about 15% this year. And yet, the question naturally arises: If Mastercard is no longer RBC's top pick, then something else must be.

Turns out, we know this answer as well. After removing Mastercard's top pick designation today, RBC Capital named Vantiv (NYSE:WP) its new favorite payments stock. According to RBC, now that Cincinnati-based Vantiv owns London-based Worldpay, the new and improved Vantiv is set to show "accelerating organic growth," supplement that with synergies from its acquired Worldpay subsidiary, and pay down the debt absorbed to finance the acquisition, reducing interest costs and boosting profits.

Already on Wall Street, analysts are forecasting compound earnings growth of 34% for Vantiv over the next three years -- a rate of increase nearly twice what they predict for Mastercard. RBC, meanwhile, is betting Vantiv will grow even faster, earning at least $4.40 per share in fiscal 2019 -- a two-year growth rate of as fast as 67% per year. This, says RBC, will make Vantiv "the most compelling upside option over the next two years in Payments."

Time will tell if RBC is right about that. But given how well RBC did with its last top pick, I wouldn't bet against them.