Shares of Himax Technologies, Inc. (NASDAQ:HIMX) lost 24.1% of their value in December, according to data provided by S&P Global Market Intelligence.

The big sell-offs corresponded with a tweet from short-selling investment publication Citron Research, which alleged that the semiconductor company's management had a history of fraud and that investors did not have a clear picture of the business's operations. 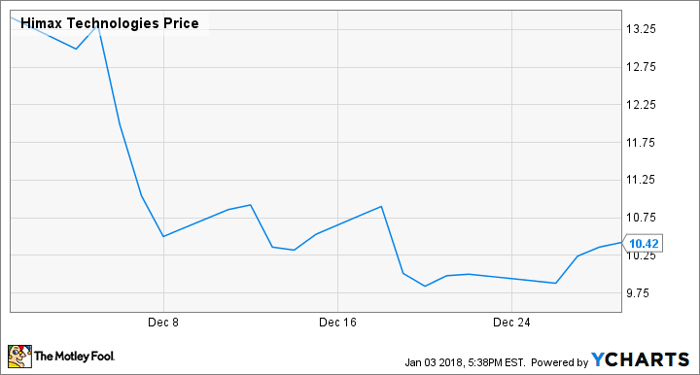 Citron published its tweet criticizing Himax management on Dec. 6, prompting a roughly 10% decline in the stock's value during the day's trading, followed by additional sell-offs. Two days later, Himax issued a press release in response to Citron's tweet. The quote below presents the key point from the release:

The company reaffirms its commitment to transparent and reliable shareholder communication, and its adherence to the highest standards of corporate governance. Himax cautions investors that Citron Research has never made any contacts with the company and that the tweet did not contain any input from the company. Himax categorically denies any and all allegations of fraud.

Highmax stock had climbed roughly 35% in November after the company reported better-than-expected third-quarter results so the stage may have been set for a pullback, which was then kicked off by Citron's comment.

Citron has become notorious for publishing scathing critiques of its targets and taking an activist-investor approach to short selling. The investment publication has notched notable successes including a bet against Valeant Pharmaceuticals prior to the company's share price collapse in 2015, but it has also recommended shorting stocks including Nvidia and Mobileye in the lead up to big bull runs. With that in mind, investors should take Citron's accusations with a grain of salt. The criticism from the publication presents an occasion to look at Himax and its operations with some added scrutiny, but, so far, it's not a reason to write the chip company off.

Himax makes specialized chips that are used in facial recognition technology, displays, and smartphone cameras and counts Alphabet, Apple, and Qualcomm among its client base. With the company ramping up its production capabilities in order to meet demand and diversifying its product lineup, it appears to have avenues to big sales expansion going forward.

3D image sensing chips should be a major growth engine for the company as the feature is incorporated into a wider range of devices, and increasing demand for 4K televisions is also likely to boost sales. While the company has recently experienced uneven revenue periods and trades at a pricey-looking 36 times forward earnings, it's also valued at just 2.1 times forward sales and offers a 2.1% dividend yield. Himax might not be a low-risk stock, but it has some promising performance catalysts in the pipeline, and there seems to be a good chance that it will bounce back from its December sell-offs.