Please ensure Javascript is enabled for purposes of website accessibility
Log In Help Join The Motley Fool
Free Article Join Over 1 Million Premium Members And Get More In-Depth Stock Guidance and Research
By Reuben Gregg Brewer - Jan 5, 2018 at 9:57AM

The last month of 2017 was a good one for U.S. based steel mills, here's what you need to know to understand the big price gains.

The driving force behind the broad steel stock rally was China. For years U.S. mills have been complaining about a massive influx of foreign, low-priced steel. The imports, which U.S. steel makers contend are often being sold below production cost, are being driven by overcapacity in China. China alone makes roughly 50% of the world's steel. Domestic Chinese demand for steel has weakened in recent years as the country's economic growth has slowed, leading to an increase in exports that's disrupted steel markets around the world, including the U.S. steel market. 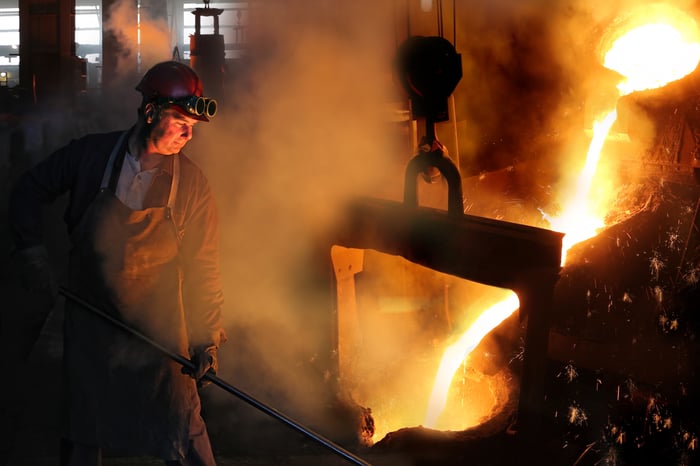 It should come as no surprise that U.S. steel prices fell with cheap foreign steel flooding into the United States. The U.S. steel mills have been working to get the government to slap tariffs on foreign steel to help slow the flow. That's a long and difficult process that has been gaining some traction. But protectionist measures don't solve the root problem, which is a global oversupply of steel driven by still robust Chinese production.

However, the Chinese government appears to finally be doing something about it -- even if it isn't for the reasons U.S. steel companies might like. Making steel is a particularly dirty process, so the industry is a big target when it comes to pollution. Which explains why China is increasingly looking to reduce its disastrous pollution levels by curbing steel production. Less steel production in China is expected to translate into reduced steel exports. That, in turn, will support pricing power at the U.S. steel mills.

U.S. Steel and AK Steel rallied dramatically because they both make heavy use of blast furnaces. This is an older technology that basically requires high utilization rates for the mills to produce profits. Once these mills are running at high capacity, however, earnings can be very large. So a reduction in Chinese supply is particularly good news for this pair of steel mills. 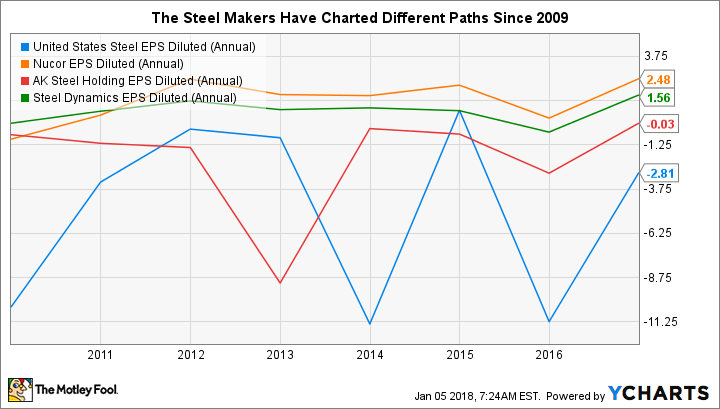 Nucor and Steel Dynamics are focused on electric arc mini-mills, which are, to simplify a bit, easier to turn on and off. That allows them to run profitably even in difficult steel markets. To put some numbers on that, Nucor has lost money in just one year since the 2007 to 2009 recession ended, after which the steel industry really started to get hit by the flood of low-price imports. Steel Dynamics lost money in just two of those years. U.S. Steel, on the other hand, lost money in seven of the years following the end of the recession. AK Steel has done even worse, losing money every year between 2009 and 2016. That said, it looks like this mill might turn a profit when 2017's final numbers come in. At the end of the day, however, Nucor and Steel Dynamics likely didn't rally as much because they've been doing better than U.S. Steel and AK Steel throughout the downturn.

U.S. steel makers and their shareholders are clearly pleased to hear that China is curbing production. However, there's no way to tell if the cuts will stick or if China will just ramp steel production up again when pollution levels fall enough to appease its citizens. In other words, this could be a temporary reprieve. If you are looking at steel companies you are better off sticking with the companies that proved the most resilient through the steel industry downturn, which would include both Nucor and Steel Dynamics. That said, steel names aren't cheap today, so you might want to hold off investing at all. Steel is a cyclical industry, there's likely to be a better entry point in the future.