What: A weight has been lifted off of steel stocks after the U.S. imposed anti-dumping duties on a number of major steel-producing countries. That news sent U.S. Steel (X 1.27%), AK Steel (AKS), Arcelor Mittal (MT 0.65%), and TimkenSteel (TMST 2.14%) all up double digits today: 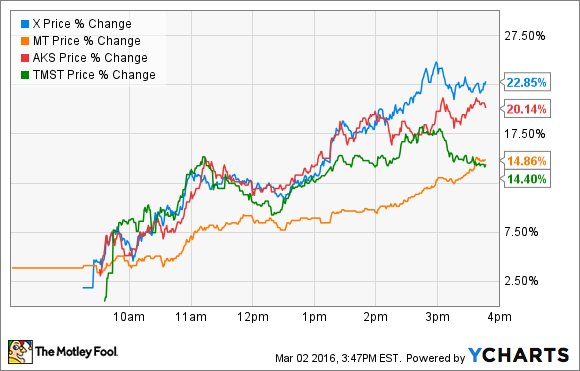 So what: The U.S. government imposed tariffs on seven steel-producing nations, which were found to have dumped products at unfairly low prices in the U.S. market. China was slapped with the highest tariff, of 266%, which is thought to effectively lock it out of the U.S. market. Japan and Brazil were also slapped with huge duties of 71% and 39%, respectively.

Steelmakers in the U.S. have been very vocal with their complaints that foreign rivals are dumping products, which is hurting their ability to compete. U.S. Steel, for example, noted in its fourth-quarter report that its flat-rolled segment was hurt by a decrease in average realized prices due to what it believed was dumped or subsidized imported products on the domestic market. TimkenSteel also complained in its fourth-quarter report that it was facing pricing pressure from imports, which would lead to even lower earnings in 2016.

Meanwhile, ArcelorMittal attributed its weaker earnings and sour outlook for 2016 on a surge in Chinese exports. Those outlooks are much improved now that that these steel producers won't be competing against products that are being dumped by foreign competitors.

Now what: These tariffs are a big win for U.S. steel producers because they no longer have to compete against unfair practices by foreign competitors. The steel market, in general, remains weak due to the strong dollar, weak oil prices, and tepid Chinese steel demand. While the tariffs will help steel producers better navigate these tough market conditions, an improvement in macro market conditions is really what steel producers need to see in order to drive a more-sustainable improvement in their profitability.