With another big win on the tariff front, which should help to ease the pain U.S. steel makers are feeling from "illegal" imports, mill owners across the board rallied. But how excited should you really get from this? After all, AK Steel (NYSE: AKS) CEO Roger Newport recently explained: "It's not so much imports coming in. They have and always will be part of our market." The issue is: are the imports being subsidized or sold at unfair levels? This distinction makes the fight for "fair" pricing difficult, at best. Here's the bigger picture story from the recent steel industry trade win.

Big bump
The shares of United States Steel (NYSE:X) and AK Steel quickly jumped by over 40% each in the days following the United States' announcement of levies on imports of cold-rolled steel from China, Brazil, India, Japan, Korea, Russia and the U.K. China took the biggest hit, with a duty of 265%. Flat-rolled steel gets used in things like cars and appliances. This provides one reason these steelmakers rallied, since these are important markets. To give an example of how important, AK Steel gets around half of its revenues from the auto sector.

But there's more going on here. U.S. Steel and AK Steel both have debt-heavy balance sheets and use older, and more expensive, blast furnace technology. So the pricing downturn in steel has had a disproportionate impact on their financial results. U.S. Steel has lost money in six of the past seven years. AK Steel has bled red ink for four consecutive years.

That's a far cry from competitors Nucor (NYSE:NUE) and Steel Dynamics (NASDAQ:STLD), which both make extensive use of less expensive electric arc furnaces. This pair lost money in 2009, but Nucor has been profitable since that point and Steel Dynamics posted red ink for only the second time last year. Both Nucor and Steel Dynamics rose on the news of the tariffs, but not nearly as much as U.S. Steel or AK Steel.

Is this enough?
It's important to make the distinction that AK Steel's CEO highlighted. In fact, Nucor CEO John Ferriola echoed the sentiment recently, when he noted: "We do not have a problem with imports. We have a problem with illegal unfairly traded imports." A few numbers should help here.

According to AK Steel CEO Roger Newport, imports have historically made up around 20% or so of the U.S. market. More recently that number has been around 30%, hitting a quarterly high of 34% at one point last year. So there really is a big influx of steel. The problem is when the steel prices simply don't jibe with the cost of making steel, which suggests dumping.

But dumping is really a symptom of a bigger issue. There's too much steel and not enough demand on a global scale right now. So some foreign steel mills are selling at any price they can get wherever they can get it. Normally you'd expect plant closures and curtailments in this environment, but that hasn't happened as quickly as you might anticipate as countries help prop up their steel industries. That's the real problem; dumping is the symptom. 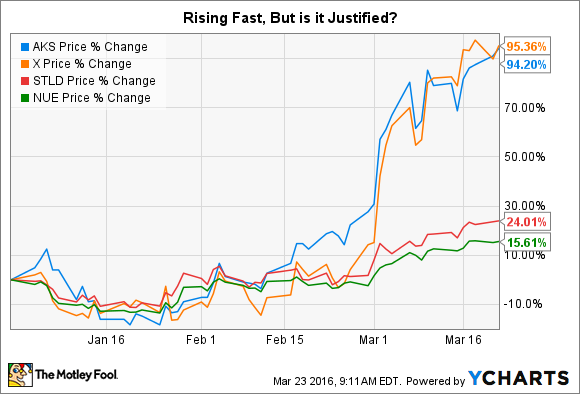 More fighting to be had
In fact, this isn't the first win on the tariff front for U.S. mills. The trouble is that each product category has to be handled on its own. That means tariffs are like putting Band-Aids on a gaping wound -- it helps, but not much. Until global supply starts to drop off materially, AK Steel, U.S. Steel, Nucor, Steel Dynamics, and all of the other U.S. mills will face intense import pressure.

But it's important to remember that imports will never go away. That's why the mills have also been working to move up the value chain and produce steel that isn't as affected by imports or that competes on a more balanced playing field. For example, Nucor is positioning itself as the only North American supplier of high-strength, low-alloy beams. And AK Steel expanded its research and development team by 30% year over year in 2015, so it can offer up differentiated products.

One trade case, or even a handful of cases, isn't going to solve the real problem facing the U.S. steel industry -- a global glut. Trade wins help, to be sure, but there's still a long road ahead. And trade cases aren't, and can't be, the only way the industry deals with imports. Taking a big-picture view, the current trade case just isn't that big a deal, even though the stocks of the weakest steel mills have soared on the news.

If you are looking at the moribund U.S. steel industry trying to find bargains, tread carefully. There's a lot more work to be done before industry prospects turn higher. That said, sticking to the companies with low cost structures and strong industry positions, such as Nucor and Steel Dynamics, is a far better idea than taking a flyer on a money losing mill.