Despite widely publicized difficulties finding the "on" switch on its Model 3 production line, Tesla (NASDAQ:TSLA) had a fabulous 2017, with its stock rising 42% in value and beating the S&P 500's performance by a factor of roughly three. But now that 2017 has drawn to a close, investors are naturally asking: What should we expect from Tesla in 2018?

A plethora of opportunities

There are plenty of possibilities. Tesla arch-pitchman and CEO Elon Musk has announced all sorts of projects rolling out over the next few years -- and others already begun -- with which to entice the imaginations of investors: From solar rooftops to industrial-scale superbatteries, and from massive, electrically powered 18-wheelers for long-haul trucking to electric crossovers and pickup trucks for weekend warriors -- and of course, a Model 3 mass-market electric sedan for everybody. 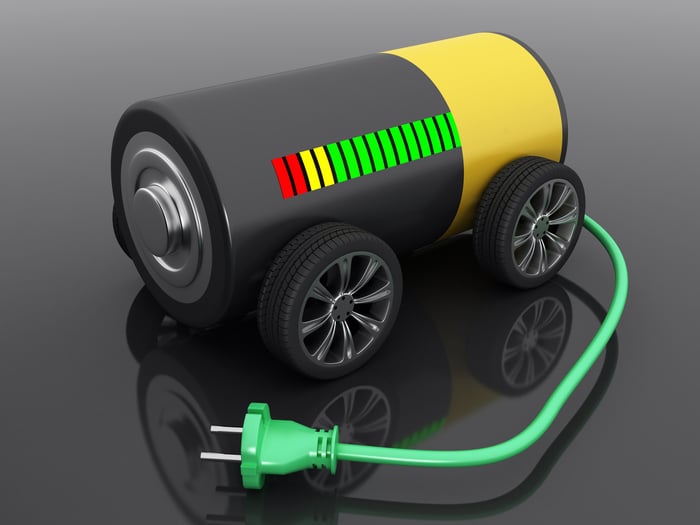 Rather than address everything that might possibly happen in 2018, I'm going to limit myself to making just three high-probability predictions. If I guess right, each and every one of these predictions will come true -- and I expect you to hold me accountable come Dec. 31, 2018. That's why before this article is complete I'll be making a public prediction on Tesla stock on Motley Fool CAPS.

Feel free to head over there and call me out if you think these predictions are entirely off base.

Prediction 1: Tesla Model 3 production will step on the gas (so to speak)

Without further ado, let's dive right into the predictions -- and what better place to begin than with the aforementioned Model 3 sedan?

Last quarter, as you will recall, Tesla's Model 3 production plans drove into a ditch. With Tesla expected to produce 100 Model 3 electric cars in August, and fifteen times that number in September, Musk was embarrassed to report that by the end of September, Tesla had delivered just 222 Model 3 sedans -- and mostly to Tesla's own employees.

By November, however, reports surfaced that Tesla had begun delivering at least small numbers of Model 3 sedans to non-Tesla employees. This has led at least one commenter, electric vehicle enthusiast Electrek.com, to opine that Tesla now looks "confident in an imminent increase of their production rate."

Wall Street had been predicting that we could see 15,000 Model 3s delivered this year, but no longer believes that happy prediction. Still, on Wednesday, analysts at KeyBanc confirmed that after interviewing Tesla employees at more than a dozen sales locations, they believe Tesla could deliver 5,000 Model 3s by the end of 2017.

Granted, 5,000 cars in three months is a far cry from Musk's July promise to build 5,000 cars per week by the end of this year. But it would still be more than a 20-fold increase from what Tesla delivered last quarter -- and indicative of a rapid ramp-up in Model 3 production in 2018.

One of the Tesla developments that received much less attention than it deserved last year was the November announcement that Musk delivered on his promise to build Australia a 100-megawatt battery storage system in 100 days "or it is free."

Admittedly, there was some fine print to Musk's offer, notably the fact that he had the backup battery system half-built before signing the contract that started the clock on that 100-day promise. But even so, Tesla delivered on time and on budget according to the contract terms. And by all accounts, the new South Australian Tesla Powerpack system is performing admirably.

In December -- the middle of the Australian summer -- The Independent reported that Tesla's backup battery had been called upon to smooth out power outages twice in three weeks. In each case, Tesla's batteries kicked in within seconds, versus the minutes it would have taken to fire up a backup coal plant, helping to head off widespread blackouts.

Australian officials say Tesla's performance is exceeding expectations and kicking in at "record" speeds. Such performance is bound to draw the attention of other countries and territories facing similar problems with electricity supply -- Puerto Rico in particular, where Musk has reportedly been in talks with the governor about building a similar system.

Bloomberg New Energy Finance (BNEF) estimates there's a market for the construction of about 305,000 megawatts-worth of battery storage over the next 14 years. That's enough demand to support the construction of more than 2,300 new storage systems the size of what Tesla built for Australia. At $50 million apiece, that could equate to more than $115 billion in potential contracts.

I'd say the odds of Tesla winning at least one of them in 2018 are pretty good.

Of course, to capitalize on this opportunity -- and on the opportunities to sell hundreds of thousands of Model 3 electric cars, Model Y crossovers, a recently unveiled electric semi-truck, and an even more recently touted electric pickup truck -- Tesla will need cash. A lot of cash. And that's something that Tesla is running short of right now.

At last report, Tesla's multiple ongoing projects had the company burning through cash at the insane rate of $4.7 billion per year. Yet according to data from S&P Global Market Intelligence, Tesla has only $3.5 billion in the bank to finance all of this (and more than $9.6 billion in debt).

I feel I'm stating the obvious here, but it seems to me a virtual certainty that Tesla will have to raise more cash before 2018 is through. And with interest rates on debt on the rise, the chances are very good that Tesla will decide to sell more stock in order to raise that cash.

Is that bad news for Tesla investors? Does it mean that 2018 is the time to sell your Tesla stock?

Not necessarily. Although Tesla shares have fallen about 10% below their highs of mid December, the stock is still up more than 40% for the year. The result: Musk is still going to get a lot of money for each new share of Tesla stock sold to investors. As long as that money is put to good use -- building Gigafactories to produce batteries, and building electrical storehouses, Powerwall home batteries, and electric cars, trucks, and semis to use those batteries -- I see no reason that Tesla stock can't climb to even higher heights in 2018.

That's why, despite all my reservations about the seemingly high valuation on the stock -- and the difficulty of valuing it before the company begins earning profits against which to value it -- I think Tesla's 10% decline in price since mid December provides an excellent opportunity. And that's why I'm rating Tesla stock a buy for 2018.