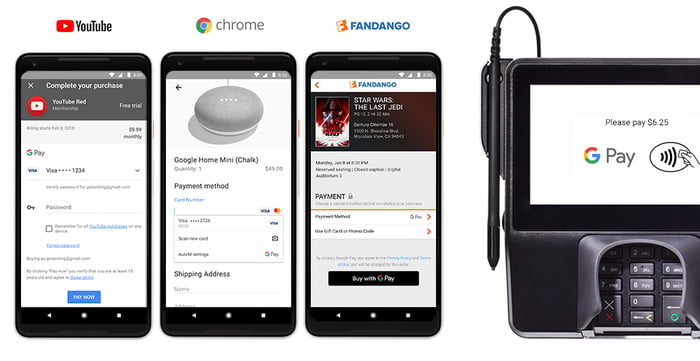 It's never been clear why Google felt it was necessary to have separate services to purchase digital content on Google Play, auto-fill credit card information in its popular Chrome browser, process peer-to-peer (P2P) payments, and support contactless payment terminals at retail stores.

The good news is that the company is finally recognizing the error of its ways and moving to consolidate everything under Google Pay. After factoring in the long dead Google Checkout, the newer Pay With Google version, and the recently announced Google Tez (Google's localized payment service for the Indian market), Google Pay represents Google's sixth payment service.

Google is not only finding a more coherent branding strategy, but also essentially aligning with Apple's (NASDAQ:AAPL) branding. Many companies have borrowed the Mac maker's simplified branding (Samsung Pay and Fitbit Pay, to name a couple), so Google's move should come as little surprise. Apple Pay adoption continues to make progress, with active users more than doubling over the past year and annual transactions soaring 330%, according to CFO Luca Maestri on the November earnings call.

There's still plenty of work to do before consumers ditch plastic (if ever), so it's important that Google consolidates its payments services now while the mobile payments market is still in the early innings. Eliminating any confusion over which service an Android/Google user needs will only help adoption.

When Android Pay first launched in 2015, The Wall Street Journal reported that unlike Apple, Google would not be earning a cut of the transaction fees. The Mac maker reportedly keeps a 0.15% cut of all transactions proceed through Apple Pay, justified in part by added security through tokenization (Android Pay also uses tokenization), a seamless user interface that encourages usage, and Apple's marketing prowess and sheer weight in consumer markets.

What's less clear is whether or not Google Pay will have a better economic model. Google Wallet hemorrhaged cash in the early days, mostly in the form of exorbitant processing fees paid to credit card companies, contributing to its financial failure. Hopefully, Google has secured more favorable terms from financial partners, so that Google Pay can succeed where all of its predecessors have failed.