The stock market remained resilient on Monday, with most major benchmarks posting modest gains to add to the large jumps they experienced in the first week of the year. In the absence of market-moving news, many investors are waiting for broader readings on the health of the U.S. economy. The coming earnings season, which will start within the next week, should also shed light on how favorable 2018 could be. Despite broad optimism, some stocks failed to participate in the rally. Dave & Buster's Entertainment (NASDAQ:PLAY), Axovant Sciences (NASDAQ:AXGT), and Five Below (NASDAQ:FIVE) were among the worst performers on the day. Below, we'll look more closely at these stocks to tell you why they did so poorly.

A tough game for Dave & Buster's

Shares of Dave & Buster's plunged 22% after the restaurant and entertainment chain announced much weaker guidance for its full-year results, along with downbeat performance so far for its fourth quarter. Comparable sales had fallen more than 5% during the quarter through Jan. 6, as the company confirmed its earlier prediction that it would start out more slowly than in past years. Slight reductions in revenue and earnings expectations weighed on the stock, and investors weren't happy that Dave & Buster's now expects comps to fall for the full year. As other restaurants seem to make advances after a tough period, Dave & Buster's apparent lagging didn't instill confidence among those following the stock. 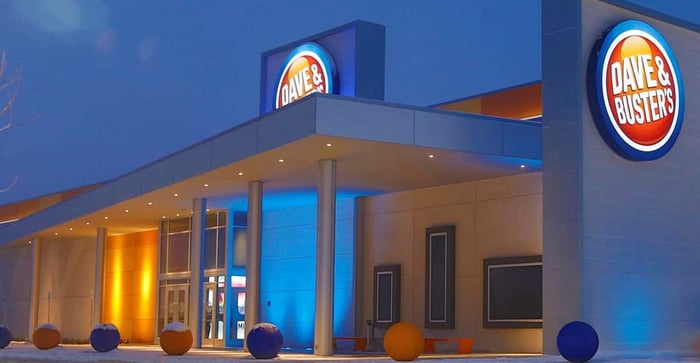 Axovant gets a big setback

Axovant Sciences stock lost more than half its value in the wake of bad news in several midstage clinical trials that spurred it to give up on development of its lead drug candidate. The biopharmaceutical company said that phase 2 trials of its intepirdine investigational drug failed to meet primary efficacy endpoints, including improvements in motor function, cognition, global function, and gait speed. A separate trial involving another drug, nelotanserin, met its primary endpoint of safety in a phase 2 study and also produced some other encouraging results. Yet investors were disappointed with intepirdine's failure and Axovant's decision no longer to pursue studies with the drug, and some fear that the company's viability might be in question.

Finally, shares of Five Below finished lower by 7.5%. The teen discount retailer reported a 27% rise in net sales for the holiday period from late October to early January, with comparable sales climbing by 6.7%. Five Below also said that it expected fiscal fourth-quarter comps to rise 4% to 6%, but its earnings guidance for $1.09 to $1.16 per share for the quarter was less than what those following the stock had expected to see. Nevertheless, Five Below has performed strongly over time, and despite a minor pullback, its recent financial success is just the latest in what has been a long positive trend for the retailer.