Healthcare giant Johnson & Johnson (NYSE:JNJ) pays a nice dividend. Based on its latest quarterly payout, the stock yields about 2.3%. That may not seem all that high, but it's a lot better than the S&P 500's anemic 1.75% yield.

If you're not content with Johnson & Johnson's dividend, there are plenty of fatter ones available. Three of our Foolish investors think Enbridge (NYSE:ENB), International Business Machines (NYSE:IBM), and American Eagle Outfitters (NYSE:AEO) are good bets if you want a bigger payout than Johnson & Johnson is willing to offer. 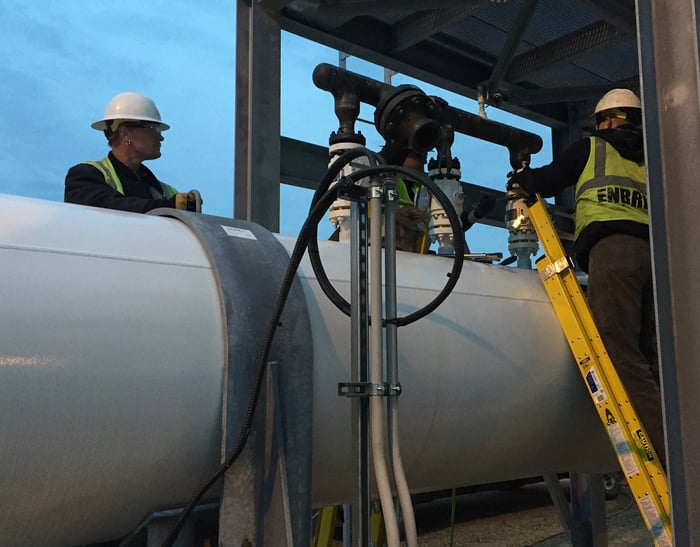 A fast-growing option with a solid payout

Matt DiLallo (Enbridge): Canadian oil pipeline giant Enbridge has been an excellent income stock to own over the long term. Not only has it paid a dividend for more than 64 years but it has upped the payout in each of the last 23 years, growing it by an 11.7% compound rate over the past two decades. That growth will continue in 2018 since it has already announced a 10% increase that will boost its yield to 5.3%, which trounces Johnson & Johnson's current rate.

More importantly, that payout is on a rock-solid foundation. For starters, 96% of Enbridge's cash flow comes from stable long-term, fee-based contracts or other arrangements that enable it to generate very predictable cash flow. Meanwhile, the company plans to return about 62% of 2018's cash flow to investors via the dividend, which is among the lower payout ratios in its peer group. Finally, Enbridge has a solid balance sheet, which should strengthen in the coming years from the planned sale of some noncore assets.

Even with those sales, Enbridge expects to raise its dividend by a 10% annual rate through 2020. That's because it has 22 billion Canadian dollars ($17.7 billion) of higher-return expansion projects currently underway, which should grow cash flow by a 10% compound annual rate over that time frame. That combination of a high growth rate and a higher current yield makes Enbridge a stock that income seekers should seriously consider.

IBM will enjoy a few tailwinds this year that could propel the stock higher, icing on the cake for dividend investors. The company's latest mainframe system, which began shipping in September, will provide a revenue boost in the first half of the year. Its new POWER9 processor could provide a boost as well. And if the U.S. dollar continues to weaken against other currencies, IBM's mostly international revenue base will benefit from the currency translation effects.

Though IBM has suffered from five straight years of declining revenue, 2018 could be a different story if these tailwinds play out. The company's strategy, centered around enterprise customers and a focus on profits over reckless revenue growth, has taken a long time to start bearing fruit. But things are starting to look up for the company, and now is a great time to lock in a near-4% dividend yield.

AEO struggled throughout most of 2017, due to concerns about online retailers, sluggish brick-and-mortar traffic, and fast-fashion rivals crushing mall-based apparel retailers. The bankruptcies of Aeropostale, American Apparel, The Limited, and Wet Seal also raised serious doubts about AEO's future.

However, AEO proved the critics wrong with 11 straight quarters of positive annual sales growth. The story was always the same: Double-digit comps growth at its newer Aerie lingerie and activewear brand continued to offset the flat to anemic growth of its namesake brand. Piper Jaffray also rated American Eagle as the second highest-rated clothing brand among U.S. teens after Nike (NYSE:NKE) in its fall 2017 "Taking Stock with Teens" survey.

AEO isn't immune to the headwinds facing the apparel market -- its gross margin dipped annually last quarter, but expanded on a sequential basis. Therefore, the company won't sink anytime soon -- thanks to the strength of Aerie, its denim products, and women's apparel.

Analysts expect AEO's revenue to rise 4% this year but for its earnings to drop by 7% due to those margin pressures. However, analysts expect its revenue and earnings to climb 1% and 10%, respectively, next year as demand stabilizes. The stock also remains fairly cheap at 15 times next year's earnings.