With 2018 here, I'm sure there are plenty of you that made some new years resolutions to make better investment decisions. If the objective is to build wealth over the long haul or provide a nest egg that throws off cash, then investing in dividend stocks should be high on your list for your portfolio.

So we asked three of our investing contributors to each highlight a dividend stock they see as a great pickup this month. Here's why they picked Braksem (NYSE:BAK), Public Storage (NYSE:PSA), and Pembina Pipeline (NYSE:PBA). 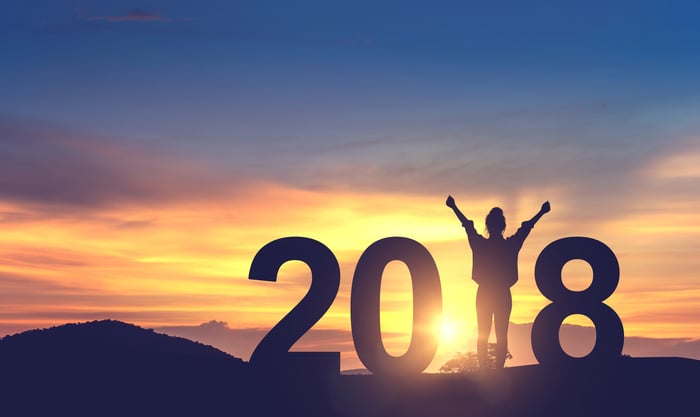 Maxx Chatsko (Braskem): While most of the United States is being blasted by cold air, Brazil is smack-dab in the middle of its rainy summer season. But it offers more than dreams of climate refuge, like an investment opportunity in its leading chemical manufacturer, Braskem.

The dividend yield is a bit more difficult to calculate than for most stocks because it's usually paid out once per year and the timing has been interrupted by Brazil's (and Braskem's) economic and political woes in recent years. That said, the company agreed to a $957 million global settlement for its role in the country's bribery scandal and still managed to post a 2.8% dividend yield in 2017. Historically it's been above 4%.

Why buy in January? Well, Braskem is beginning 2018 with the least amount of uncertainty in years. Sure, the total amount outstanding on its global settlement payment was $501 million at the end of September 2017, but increasing margins from favorable petrochemical spreads and $2.4 billion in cash on hand significantly blunt the financial effect of the fine.

Cash flow remains strong and growing, which will help to continue mopping up a messy balance sheet. Growing production volumes this year and several growth projects coming online by 2020 promise to push the stock -- trading at just 10 times future earnings -- higher. Long story short, Braskem is solid dividend stock in a high-growth industry and region that's still being punished for past offenses, but should remove itself from Wall Street's timeout corner with a strong performance in the year ahead.

Not all stocks have become too expensive

Matt Frankel (Public Storage): Real estate didn't do too well in 2017. Despite a nearly 20% rise in the S&P 500, the equity REIT sector increased by less than 5%. Many self-storage REITs got hit even worse, mainly on fears of oversupply hurting profits, and industry leader Public Storage was no exception.

You may be familiar with Public Storage's orange-colored facilities, of which it owns and operates roughly 2,700 in the U.S. and Europe. However, you may not be familiar with how the self-storage business works, as it is a rather distinct type of real estate.

Specifically, storage facilities have extremely low operating and maintenance costs, which makes them attractive as a business. Public Storage claimed in its 2015 annual report that it can break even with just 30% occupancy, and its properties are currently over 90% full.

One thing that I'm highly optimistic about is Public Storage's relatively new development program. Traditionally, the company has grown primarily through acquisitions, but developing properties from the ground up could supercharge future returns.

To be clear, self-storage is not without risk. To name one big risk factor, the month-to-month lease structure of self-storage properties makes it rather prone to recessions, as it's easy for tenants to vacate. However, I feel that the reward potential greatly outweighs the risk involved, especially over the long run. After falling by 7% in 2017, Public Storage now yields nearly 4% and is definitely worth a look for long-term investors. 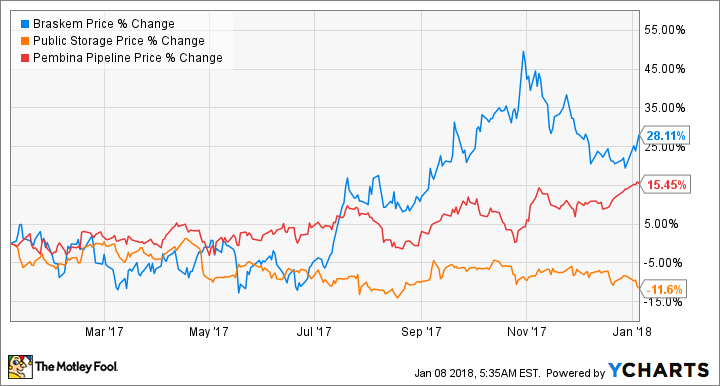 Big payout increases in the pipeline

Tyler Crowe (Pembina Pipeline): 2017 was an incredible year for Pembina Pipeline. The company completed a massive suite of projects in the year and closed on a CA$9.5 billion deal to acquire another Canadian pipeline and energy infrastructure company, Veresen. Despite all of this news, the company's finances didn't quite reflect this monumental change. That is likely to change in 2018, and investors are probably going to reap the rewards.

As management noted during its third-quarter earnings, most of these multibillion-dollar projects started operations in the second half of the year and had not yet ramped up to full operating capacity. As a result, there wasn't much change to the bottom line. Management estimates that adjusted EBITDA for 2018 will be in the CA$2.55 billion to CA$2.75 billion range compared with 2016's result of CA$1.2 billion. What's even more encouraging is that the company still has plenty of growth opportunities in the years to come as it expands into new opportunities including petrochemical manufacturing and export terminals. In 2018, the company plans to spend CA$1.3 billion on its infrastructure system.

Pembina's management has done a commendable job maintaining financial discipline while executing on its most recent five-year growth plan. It still has one of the lowest debt ratios among the major pipeline companies -- debt to EBITDA is at 3.9 -- and has an investment-grade credit rating. If management can continue to maintain this kind of financial discipline while building out the CA$20 billion in projects in the wings, then investors are likely to reap considerable rewards over the coming years.